↓
Home→Jo Hovind – Flexing Her Muscle?
Back around the middle of December after noticing that the marketing plan for the “Kent Hovind is Innocent DVD Series”, by Brady Byrum on behalf of Kent Hovind, had changed and become readily available on-line, I mentioned to one of my contacts that the scheme appeared to prominently feature the name of Jo Hovind and, in doing so, suggested that she was involved in the promotion of it.
My contact indicated that the information was forwarded to Jo for whatever action she might wish to consider in the matter.
Now we see the latest promotion from Rudy Davis (aka LoneStar1776), Kent Hovind’s #1 YouTube promoter other than himself, that Rudy seems to have gone to considerable effort to point out that Brady Byrum, and by implication Kent Hovind, are not representing Jo Hovind in their scheme.
Link to Rudy’s Video:
https://www.youtube.com/watch?v=6ifsZvuWLvc
Graphic: 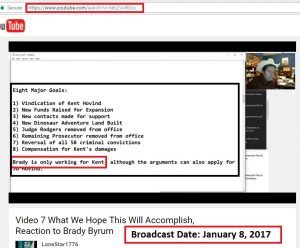 This may be indicative of Jo flexing her muscle and letting Kent know that he needs to leave her out of his schemes. Perhaps her imprecatory prayers are being answered, or Kent is simply responding to those “cease and desist” letters he is receiving.
Kent recently broadcast the following:
(Begin transcription.)
Is there somebody you’re offended with or
estranged from, and have you tried to fix it?
Have you done your best?
All you can do is say,
“Lord, I did my best.
I tried to fix it.
It wasn’t fixable.”
OK, if they leave you and go on, what do you do?
You move on with life.
OK, forget the things that are behind.
– Kent Hovind
– January 2, 2017
(End transcription.)
Kent, you are having a little trouble accomplishing that inasmuch as you continue to drag your family along with you in your schemes and scams.
Maybe Rudy’s broadcast, however, is a sign you are moving in the that direction.
Kent, you still have a lot of work to do on that project.
If you don’t keep moving in that direction, maybe we will hear directly from Jo and other family members regarding their efforts to get you to “move on” without dragging them along with you.
They still have important stories to tell, and maybe one day, sooner rather than later, they will begin to come out and tell them.
You’ve certainly never ceased to tell your false and/or misleading versions while being able to control the narrative thereof.
That needs to stop or be stopped; in my humble, totally unbiased and correct opinion!
——————————————————————