Some time ago I heard the rumor about Kent having been tutored in his early days of preaching by “Pete” Uppole, formally known as Ronald W. Uppole.

That was back during the time when other aspects of Kent’s life, according to rumor, were also going on; Kent’s neglect of Andrew, his son, Kent being fired from a preaching job for discipline of a child, and a mysterious house fire after which Kent collected the insurance money and was able to “leave town”.

Like all of such stories, Kent has yet to come out and publicly, convincingly address such aspects of his biography, though he and his people have been promoting their version of his history.

Ronald W. “Pete” Uppole, killed his wife in 1978.  According to reports it was a rather gruesome killing and he involved one of his children, his daughter, in the event.  He also had two sons.

There was quite a bit of litigation over the matter and the issue of Ronald’s sanity.  He appears to have been in and out of mental and penal institutions over the years.

Curiously, in a September 21, 2016 broadcast on YouTube, Kent introduces us to someone named Stephen Scott Uppole who he claims was his ring-bearer when he married Jo and that Stephen was on his way to Illinois to visit his father.  That seems to me to be enough to tie down the connection between Kent and Ronald, though more specific details are yet to be made known.

Here are some references in support of this article and the relevance of the issue as to how influential Ronald W. Uppole might have been on the developing Kent Hovind.

Another Legal Reference To The Ronald W. Uppole Case:

Recently Stephen recently posted the following comments to one of his FaceBook pages:

“The day before ever thing started to become unraveled I had a Wonderful date with this Beautiful young Lady, but She has to go back across seas and I am now off to help create a Creation Science theme park. Thank You Lord for giving My heart the comfort I need. God Bless and LoveYa Lil1s.”

“Well, I LoveYa San Diego. Try to be back in a couple of months. I’m on a bus heading East for two days.”

Around the 17:10 mark and following in a broadcast September 24, 2016, Kent Hovind again confirms his connections to Ronald W. Uppole in the context of trying to justify his marriage to Mary Tocco.

That discussion starts about the 17:10 mark as indicated by the following time marked link:

(Above referenced video appears to have been removed from public view!) 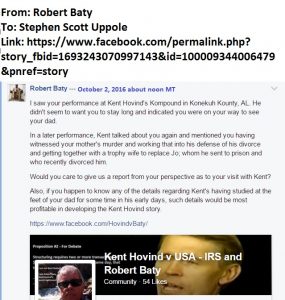 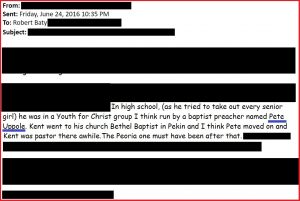 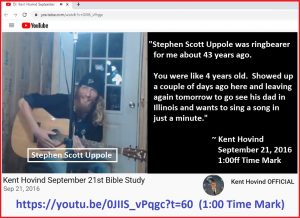 Kent was talking about his days back in Pekin, IL yesterday, but he conspicuously failed to explain his relationship with Ronald W. (Pete) Uppole.  So, I asked Loren Dawson’s son about it. 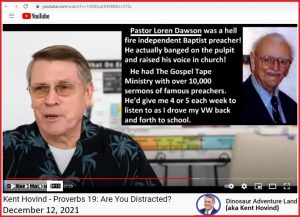 He served as pastor of Bethel Baptist Church in Pekin for over 12 years.

In 1975, he moved his ministry headquarters back to Virginia, IL and continued to serve in evangelism for many years. 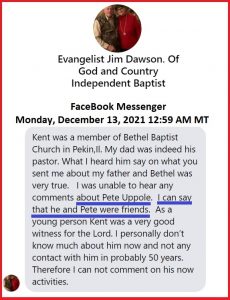 Two 1990 newspaper articles have come across my desk regarding Ronald W. “Pete” Uppole. 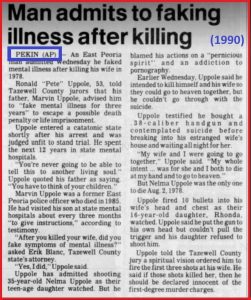 Kent Hovind finally mentions his association with “Pete” Uppole, but doesn’t tell the “rest of the story” and just how much Uppole influenced him early in his preaching career. 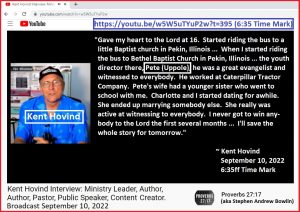 Theodore Valentine Valenzuela again shows why he should not be trusted with the Hovind story.  Tonight he made cryptic allegations in an effort to make some “big reveal” (that wasn’t).  I am convinced that he flat out got the Uppole history wrong. 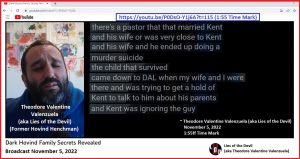 For those unfamiliar with Theodore, the article at the following link, I think, is a very good primer on him: