↓
Home→Kent Hovind and His “Mr. Wilson” 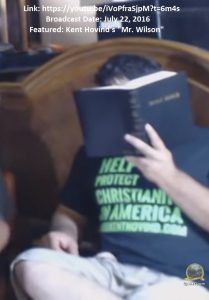 Mr. Wilson was a character from Tim Allen’s “Home Improvement” television series.  The audience never saw his face; just the top of his face as he peered over the fence.

So it is that one of the characters who has latched on to Kent Hovind’s coattails for fame and fortune is one known as Theodore (Theo) Valenzuela who appears to have given up a struggling computer business in Arizona to take up with Kent and provide technical support to him.

One of his gimmicks is to let his face be seen on any broadcast made by Kent, though he did seem to briefly appear on a video from a church where Kent appeared.

Theo often has traveled the country with Kent and in previous weeks Kent would brag about how he was fixing Theo up with a Russian girl from the Northwest.  We haven’t heard lately how that is going; if it is going at all.  Kent has often spoken of his matchmaking skills and the fact that so many single men and women are at his compound in Conecuh County and in need of mates.

Following is the link to the Arizona company that Theo used to operate.  I say used to because I can’t tell that it is actually still operating.  Also, it seems curious to me that the information there doesn’t actually identify the owner(s).

It does, however, have this describing the owner:

I don’t know if it is all in good fun, or if Theo has something more sinister going on that he is trying to hide out from.  Maybe we will learn more as his relationship with Kent Hovind develops.

Bertus Den Droef may have captured a fuzzy view of Theo in this clip from the church performance of Kent Hovind mentioned earlier: 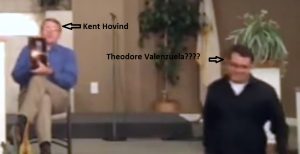