(Page Updates as Noted Below) 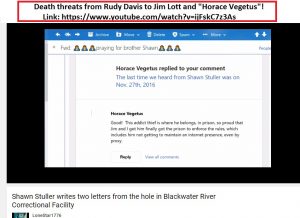 I wanna show you guys on the screen….

So, I don’t see it.  I must have blocked this guy a long time ago…

Other people saw it, and they sent it to me…

If this is true, what this individual is saying, somebody sent me this comment,

God, if they have any children, I pray that God make their children fatherless.

If either one of those individuals are married,

God make their wives a widow…

And I pray that…

These evil bastards have called the prison…

God deals with them, in am impreccatory way similar to Psalms 109.

Hold not thy peace, O God of my praise;

3 They compassed me about also with words of hatred; and fought against me without a cause.

4 For my love they are my adversaries: but I give myself unto prayer.

5 And they have rewarded me evil for good, and hatred for my love.

6 Set thou a wicked man over him: and let Satan stand at his right hand.

7 When he shall be judged, let him be condemned: and let his prayer become sin.

8 Let his days be few; and let another take his office.

9 Let his children be fatherless, and his wife a widow.

10 Let his children be continually vagabonds, and beg: let them seek their bread also out of their desolate places.

11 Let the extortioner catch all that he hath; and let the strangers spoil his labour.

12 Let there be none to extend mercy unto him: neither let there be any to favour his fatherless children.

13 Let his posterity be cut off; and in the generation following let their name be blotted out.

14 Let the iniquity of his fathers be remembered with the Lord; and let not the sin of his mother be blotted out.

15 Let them be before the Lord continually, that he may cut off the memory of them from the earth.

16 Because that he remembered not to shew mercy, but persecuted the poor and needy man, that he might even slay the broken in heart.

18 As he clothed himself with cursing like as with his garment, so let it come into his bowels like water, and like oil into his bones.

19 Let it be unto him as the garment which covereth him, and for a girdle wherewith he is girded continually.

20 Let this be the reward of mine adversaries from the Lord, and of them that speak evil against my soul.

21 But do thou for me, O God the Lord, for thy name’s sake: because thy mercy is good, deliver thou me.

22 For I am poor and needy, and my heart is wounded within me.

23 I am gone like the shadow when it declineth: I am tossed up and down as the locust.

24 My knees are weak through fasting; and my flesh faileth of fatness.

25 I became also a reproach unto them: when they looked upon me they shaked their heads.

26 Help me, O Lord my God: O save me according to thy mercy:

27 That they may know that this is thy hand; that thou, Lord, hast done it.

28 Let them curse, but bless thou: when they arise, let them be ashamed; but let thy servant rejoice.

29 Let mine adversaries be clothed with shame, and let them cover themselves with their own confusion, as with a mantle.

30 I will greatly praise the Lord with my mouth; yea, I will praise him among the multitude.

31 For he shall stand at the right hand of the poor, to save him from those that condemn his soul. 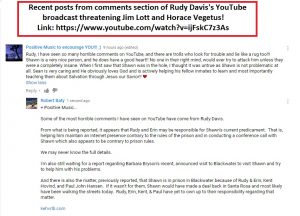 Rudy just posted a short video on YouTube again admitting to his part in what might be Shawn’s prison rules violation, and he also expresses his concern about people calling the prison to report such violations.  Rudy offers to make himself available to investigators.