↓
Home→So, Hannah, you realized it was not a joke! 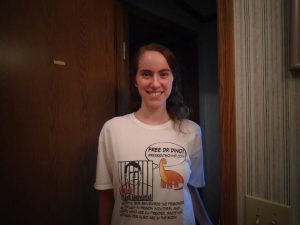 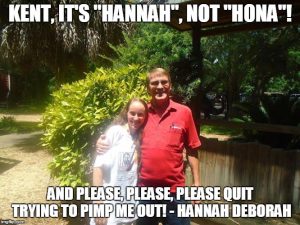 “Hannah Deborah” is a young woman that Kent brought into his inner circle and put to work managing his extensive “question and answer” program on YouTube.  Kent would often mention that Hannah was in need of man and that he was going to help her find one to take home with her.  I and others tried to warn her and tried to get Kent to quit making a joke of Hannah.

In part, it now looks like Hannah has gotten the message.

Joshua Joscelyn, another former promoter of Kent Hovind, posted a critical commentary recently in the context of Kent’s antics since getting out of prison and his intent to marry celebrity anti-vaxxer Mary E. Tocco.  Hannah has added some comments along with others following that article.

Kent Hovind’s recent references to Hannah may have been a deliberate effort to further humiliate and ridicule her because of what she has done with regard to him.

This hurts me to say but I myself have thought of many of the same points you just brought out over the last 9 months or so while I was still working for his ministry.

I hate to see him be this way.

While there are many things I like about him, I have found him to be narcissistic in the extreme (except when he wants to put on a humble front for certain things), arrogant, quick to jump to the next topic without fully covering the current one, avoids topics he doesn’t like, and like you said, doesn’t accept correction; just comes back with a counter-argument to make his point look undeniably right.

Many times my parents warned me that he wasn’t doing right and that I should step down, but I felt bad leaving him hanging without someone to take care of the thousands of emails  he’d receive a week so I kept going and defended his good points.

As thanks for the work I did, I had to deal with (of all things) the very unwelcome advertising of myself as a single woman to anybody out there who might be interested in me on YouTube which I found, for a so-called man of God, “pastor”, and evangelist, etc., very inappropriate and shocking behavior coming from somebody who is so intelligent and is so strong in the faith.

That was so foolish and showed his complete lack of wisdom and discernment.

I asked him very nicely not to that and he’d stop for awhile and then conveniently forget and do it again.

That was a huge turn off for me as a young woman trying to stay behind the scenes and avoid the stalkers.

I guess all we can do now is pray for him and drop our support.

I will only continue to support his creation-evolution material but I don’t feel I should support him in any other way anymore, which makes me sad.

He was a role model to me and I looked up to him since I was 10 years old.  He strengthened my interest in creation and geology and the fight against evolution propoganda as I grew up.  He was my favorite and a hero of mine.  But I find him using some of the same arguments and excuses he claims other people make towards the things he says.

Thank you for the encouragement.  However, I’m glad for my time helping him because it taught me a lot, good and bad!

I gained experience in administrative work which is cool and I fought for a cause I believed was right while he was still in prison.

But now that that’s over there are many things that need to be dealt with but instead of doing that he just keeps doing what he’s always done and doesn’t care, which disappointed my family and many others.

Sam, I’m not sure what to say because I don’t want the whole world hearing that and then everyone talks about it because there are people who will spread any tiny bit of gossip among his community, especially about me since he talked to and about me on his videos a lot.

I was always one of Kent’s strongest supporters and defenders for quite awhile so this is a bit difficult to come out with publicly.

If you feel particularly led, then go ahead.

Thank you, Coby. I appreciate that. All is forgiven.

No, I stepped down about 3 months ago.  It was more like I wasn’t needed anymore and just eased out of it because I was on vacation.

But, yeah, I’ve been done for several months now.

I noticed that Hannah appears to have separate YouTube channels for her singing and dancing activities and a separate FaceBook page for her music: