“In the court audios of the Holm case you
will hear testimony by Cleburne County
DHR that Christian Holm had absolutely
nothing to do with his baby during any
visitations.”

At the link shown above, as illustrated by the image above from that link, Susan Cobb, C. Clarke’s and Danielle’s most vocal advocate of what I consider their false narrative regarding the custody dispute over Baby Holm, makes some very serious claims worthy of consideration.

Did one or more Cleburne County DHR employees perjure themselves in testimony before the Court; regarding Mr. Holm’s involvement in visitations with Baby Holm?

I have recently engaged Mr. Holm regarding other matters involving his custody case, and he steadfastly refused to openly, honestly deal with the factual and legal justification for the State of Alabama taking custody of Baby Holm in October of 2016 and retaining custody to this day.

The available on-line record now indicates the State has obtained a restraining order against the parents and that the parents, C. Clarke & Danielle Holm, have left the state and may be now living near Boerne, TX where a family has taken them in and with Danielle possibly expecting another child and enlisting the local support of a doula.

C. Clarke & Danielle have continued to be active on FaceBook and in the promotion of their false narrative and anti-government agenda.

I have a FaceBook group that specializes in covering the Baby Holm case which can be found at the following address:

I am prepared to accept the proposition that the DHR employee(s) perjured themselves as claimed by C. Clarke & Danielle Holm, via Susan Cobb, if the evidence supports that claim.

At this point, however, and based on my experience with the Holms and their promoters, I deny the charge based on a lack of, as Mr. Holm likes to say, “facts and evidence”.

I propose that C. Clarke &/or Danielle can meet their burden of proof on this issue by providing the following information (i.e., “facts and evidence”):

1. An easy access on-line link to one of the alleged audios (not in the “dark web” used by Susan Cobb).

3. A time-mark reference to where in said audio there is at least one of the alleged statements

4. The name and title of the DHR employee/witness

5. A transcription of the DHR employee/witness statement (should only be a few words)

I look forward to the response to this challenge from C. Clarke and/or Danielle Holm and stand ready to negotiate how the proposed discussion might best be advanced if the Holms do not simply admit that they cannot defend Susan Cobb’s claim on their behalf and have no “facts and evidence” to back it up.

I accept the claim by C. Clarke & Danielle Holm that Mr. Holm did have somewhat to do with Baby Holm during one or more visitations.

This is not about that, but rather is about the claim, as noted above, whereby it is alleged that one or more State employees perjured themselves in testimony before the Court handling the custody case of Baby Holm. 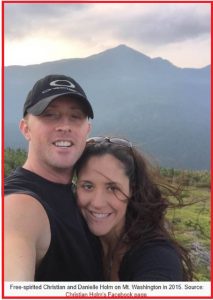