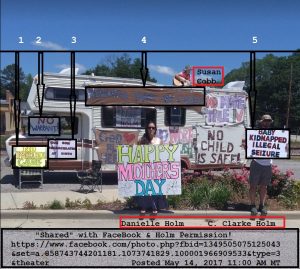 For clearer image of above see: https://pbs.twimg.com/media/C_zjhM_VwAAJlLd.jpg:large

4. Baby taken without cause

1. There was “probable cause”.

2. No warrant was required.

3. The baby was not “incarcerated”.

4. There was “cause” for the State of Alabama to take custody.

5. State custody did not involve a kidnapping/illegal seizure.

My Account of the Circumstances Surrounding State Taking Custody

Two transients, on foot, one 8-9 months pregnant, decided to freeload in Cheaha State Park, AL and deliver the baby, unassisted, in a primitive, isolated part of the park.

Despite their reported intent, after Danielle went into labor and had been in labor for some time, C. Clarke Holm declared an emergency and called 911 for assistance.

After considerable effort by first responders and park employees, C. Clarke Holm and Danielle Holm were transported to a hospital where the baby was delivered.

The two dogs the parents had been keeping with them were left with park employees to care for.

The parents declined a birth certificate, vaccincations, Social Security Number, and chose not to name or otherwise allow the child to be identifiable; indicating their intention was to leave the hospital as soon as possible and “disappear”.  One effort to disappear with the unidentifiable child was thwarted because of the security band attached to the child.

The parents were unable to demonstrate any reasonable means for caring for a newborn child.

Removing a child from the custody of a parent, legal guardian, or legal custodian.

(a) A child may be removed by a law enforcement officer from the custody of a parent, legal guardian, or legal custodian if there are reasonable grounds to believe any of the following:

The child is suffering from an illness or injury or is in imminent danger from the surroundings of the child and that the removal of the child is necessary for the protection of the health and safety of the child.

The child has no parent, legal guardian, legal custodian, or other suitable person able to provide supervision and care for the child.

(b) The person removing the child shall immediately deliver the child to the Department of Human Resources.

Filing of petition and conduct of 72-hour hearing as to necessity for continuation of shelter care of a child.

(a) When a child alleged to be dependent has been removed from the custody of the parent, legal guardian, or legal custodian and has not been returned to same, a hearing shall be held within 72 hours from the time of removal, Saturdays, Sundays, and holidays included, to determine whether continued shelter care is required.

At the 72-Hour hearing a judge determined that the State of Alabama should retain custody of the child….for cause.

The parents secretly recorded a meeting with State employees regarding their case, after the 72-Hour hearing, posted it to the Internet, and then deleted it; but not before others were able to copy and preserve the evidence.

I started following the Baby Holm case when I heard about the sovereign citizen/patriot/anti-government component to the case as evident by the parents bringing in Kent Hovind’s man Brady Byrum to secretly work with them.

That only insured, as might have been intended, that there would be no speedy resolution to the custody case as the parents had no intentions of working with the State of Alabama to resolve issues in order to have the child returned.  In fact, at one point, a letter crafted by Brady Byrum and circulated to State officials/employees resulted in visitations being discontinued for 5 weeks.

The parents’ commitment to sovereign citizen tactics was recently demonstrated when Mr. Holm was cited for speeding and made his initial appearance in court and refused to accept the court’s jurisdiction or otherwise conduct himself appropriately. 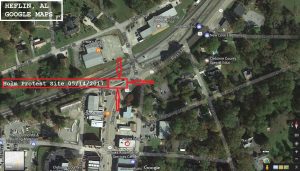