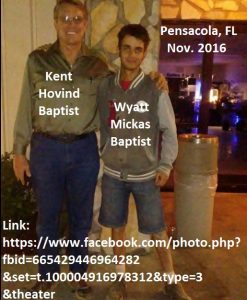 Lies, lies and more lies continue to be generated from Kent Hovind and his Kult as they continue to promote their false legal narrative and attack critics, and, whenever possible, thwart the expression of free speedh, and It didn’t take long for the Hovind people to start publicizing their victory in again getting me put in FaceBook jail.

They have been determined to lie about me and “shut Baty up” for some time now.  In recent weeks Kent Hovind himself bragged that his “legal dream team” was going to “shut Baty up” with their secret legal analysis of Kent’s 2006 criminal case.

When Kent and his people started revealing their looney legal analysis it was quickly show to be meritless, and there is a number of articles on this page dealing with its utter failure to legally support Kent’s false legal claims.

For background into my latest jail sentence from FaceBook, see:

For the announcement from Kent and his Kult, see:

EDITORS NOTE: The Free Kent Hovind journalists have an ongoing investigation into the ex-IRS agent Robert Baty for criminal use of the internet to violently stalk, harass, intimidate and persecute Christians and supporters of Kent Hovind for some time now. Special thanks to Christians who do not fear wicked men and women and seek God’s righteous judgement for evil actions.

Please read all of our other articles on Robert Baty the ex-IRS Agent and his friend Peter Reilly of Forbes.comand their connections to the non-profit IRS Freedom From Religion Foundation.

It is no surprise the wicked men and women in Government who want to persecute Christians use intimidation tactics. The IRS seems to have been paying, through pension or other means, Robert Baty an ex-IRS agent to stalk and harass Christians who support Pastor Kent Hovind.

His defamation Facebook page “KENT HOVIND AND JO HOVIND v USA – IRS” was shut down a few months ago, but that did not deter him from getting back on the internet.

He created a new page called “Kent Hovind v USA – IRS and Robert Baty” and with in a month it was shut down again due to harassment and defamation.

(A graphic of a FaceBook message was inserted here which indicated that my dedicated Hovind page was not available.  That may no longer be the case.

Facebook is finally doing the right thing. People like Robert Baty and his friends are a so-called Christians who have close ties to the Freedom From Religion Foundation (a non-profit IRS organization that is used to target Christians).

Ernest Land, the CEO of Creation Science Evangelism, has had to step into the public spotlight on many occasions to scold Robert Baty.

The facebook defamation pages (that are now shut down) host many anti-christians who have gone as far as to make death threats to volunteers at CSE (Go to UPDATE 6/15/2016 @ 6:36pm cst of article). Robert Baty’s friend named Randy Dunn has intentionally tried to cause financial harm to CSE by making shell companies that were used to defame CSE, Dr. Kent Hovind and Evangelicals associated with the Church Ministry.

ISIS has been linked to recruiting hateful individuals on the internet who wish to cause terroristic operations in America. IRS agent Robert Baty, Peter Reilly of Forbes.com and their cohorts are the type of individuals that are using terroristic means, like ISIS muslim extremists, to target Christians they have a problem with.

Thank you Facebook for doing the right thing and shutting down Robert Baty’s hateful defamation pages.

The anonymous and cowardly Kent Hovind surrogates have now, I found out, added the following FaceBook page as part of their unrelenting attack on me for daring to criticize Kent Hovind and his people:

(Update January 2, 2017 – They now appear to have removed that FaceBook page)