Kent Hovind’s “first ever” letter-to-the-editor was

to the Pensacola Journal, was published in October

Those who have followed the Kent Hovind story for awhile will recognize his oft-repeated claim about his “first ever letter-to-the-editor” of the Pensacola Journal regarding some alleged dinosaur find.

The most recent example of his boasting about that is from his November 21, 2017 BlogTalk Radio performance for American Freedom Watch Radio as shown below.

….”dinosaur bones were found in Montana

from 80 million years ago.”

So, I wrote my first ever letter to the editor.

Following are screen shots of 3 letters-to-the-editor of the Pensacola Journal that have recently been found in the archives and dated, respectively, August 1990, February 1991, and October 1991.

Transcriptions of the letters may be added later for easier reading.  (Update: 2 of 3 transcriptions have now been added.)

As reflected in the other 67 propositions in my challenge to Kent Hovind, he appears to have a long history of flat out lying about things and refusing to come out, come clean and deal with claims he makes about himself and his history (among other things).

So it is that I thought to document this latest of matters for Kent’s consideration and for the consideration of those who have an interest in such things. 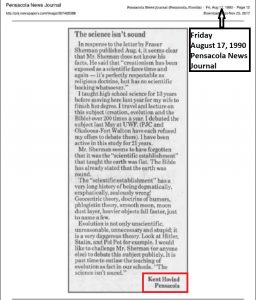 In response to the letter by Fraser Sherman published Aug 4th, it seems clear that Mr Sherman does not know his facts. He said that “creationism has been exposed as a scientific farce time and time again – it’s perfectly respectable as religious doctrine, but has no scientific backing whatsoever.”

I taught high school science for 13 yers before moving here last year for my wife to finish her degree. I travel and lecture on this subject (creation, evolution and the Bible) over 200 times a year. I debated the subject last May at UWF. (PJC and Okaloosa-Fort Walton have each refused my offers to debate there). I have beenactive in this study for 21 years.

Mr. Sherman seems to have forgotten that it was the “scientific establishment” that taught the earth was flat. The Bible has already stated that the earth was round.

Evolution is not only unscientific, unreasonable, unnecessary and stupid; it is a very dangerous theory. Look at Hitler, Stalin, and Pol Pot for example. I would like to challenge Mr Sherman (or anyone else) to debate this subject publicly. It is past time to outlaw the teaching of evolution as fact in our schools. “the science isn’t sound.” 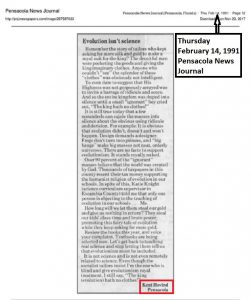 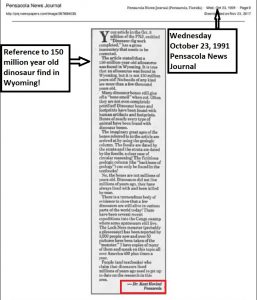 Your article in the Oct 8 edition of the PNJ, entitled “Dinosaur dig work completed,” has a gross inaccuracy that needs to be corrected.

No fossils of any kind are more than a few thousand years old.

No, the bones are not million of years old, Dinosaurs did not live millions of years ago, they have always lived with and been killed by man.

There is a tremendous body of evidence to show that a few dinosaurs are still alive in various parts of the world today! There have been several recent expeditions into the Congo swamp where some apatosaurs still live.

The Loch Ness monster (probably a pleseosaur (sic)) has been reported by 3,000 people now and over 50 pictures have been taken of the “monster.” I have copies of many of them and speak on this topic all over America 400 plus times a year.

People (and textbooks) who claim that dinosaurs lived millions of years go need to get up to date on the research in this area.

In a YouTube discussion yesterday, Kent Hovind repeats his “first letter to the editor” claim.  Link to Kent’s claim: