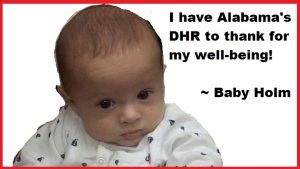 The following post was made to the “Understanding The Baby Holm Case” and the source is considered credible.  It was posted after the poster was blocked by Danielle Holm/C. Clarke Holm from their FaceBook pages in consequence of an extensive exchange.

A copy of the ORDER terminating the parental rights of C. Clarke & Danielle Holm has been obtained and posted to the “Understanding the Baby Holm Case” FaceBook group. Link to file copy on this website is:

There is reason to believe the State of Alabama has terminated the parental rights of C. Clarke Holm and Danielle Holm, biological parents of unnamed “Baby Holm”, or that the State is proceeding to do so.  Based on the “facts and evidence”, I decided to go ahead and “call it” while continuing to wait for some official indication that Baby Holm has been freed from the yoke of bondage to his biological parents and is on his way to a more desirable (though not guaranteed) permanent adoptive home.

In October of 2016 Baby Holm’s biological parents were transients, without transportation and without visible means of support, camping in an undesignated, primitive forest area in or near Cheaha State Park in northeast Alabama.  Danielle was 9 months pregnant.  They were planning on having an unassisted, natural birth of their child at or near their camp.

At some point in Danielle’s labor process it was decided to abandon the plans for a natural, unassisted birth, and an emergency was declared, they were transported to a hospital approximately 20 miles away, and Baby Holm was delivered on or about October 10, 2016.

From the beginning of their appearance at the hospital, C. Clarke & Danielle Holm exhibited “odd” behavior and beliefs.  They did not originally want to provide proper identification as to who they were and otherwise declined certain medical procedures/treatments, hospital ID bracelets, and did not want Baby Holm named or otherwise identified and declined to request a Social Security number and birth certificate for him.

The parents intent was to simply take the unidentifiable Baby Holm and “disappear”.

Alabama Department of Human Resources (DHR) became involved and came to suspect the parents of possibly being known criminals, of C. Clarke Holm having mental health concerns, of C. Clarke Holm having an older child for which he no longer enjoyed custody for reasons unknown, of possible mental issues as to Danielle Holm, and of their lack of any apparent ability to provide for the proper care of a newborn child.

.
State decision makers decided that, under the provisions of Alabama Code Section 12-15-306, that C. Clarke & Danielle Holm were not willing or were not able to properly care for the child and custody was removed from the parents on or about October 11, 2016.

Alabama Code Section 12-15-315 provides for a permanency hearing, in such cases, within 12 months of the date of removal.

It has been more than 12 months since the removal of Baby Holm to State custody.

Alabama Code Section 12-15-317 provides for the filing of a petition to terminate parental rights after a child has been in foster care for 15 months or the child has been abandoned.

It has been more than 15 months that Baby Holm has been in foster care and it may have been considered that he has been abandoned by his parents.

The facts and evidence accumulated over the last 18 months or so demonstrates that the parents have not acted in good faith in order to convince the State of Alabama that they are willing and able to properly care for Baby Holm.  They have, from the beginning, pursued “sovereign citizen” legal tactics, denying the authority of the State and its agencies/employees, and jurisdiction, and otherwise promoting a general anti-child welfare cause.

Such cases are generally quite secret in order to protect the child’s best interests.  However, due to the course the parents have taken, they have made the case one of popular public interest and one in which many factual and legal details have become public.

While we cannot currently know for certain at this time, the facts, law and evidence recited above suggest that the State of Alabama has terminated the parental rights of C. Clarke & Danielle Holm as to Baby Holm or that the termination is in process.
.
BABY HOLM IS FREE!

(It is unknown whether or not the parents will contest the termination.)

REFERENCES (to be updated as time allows): 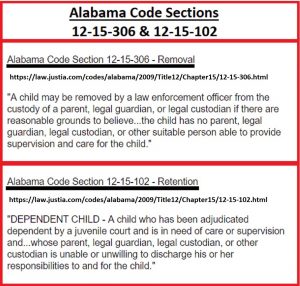 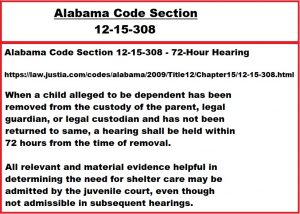 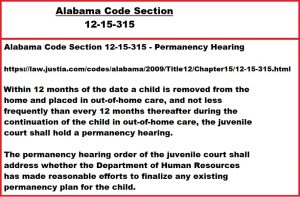 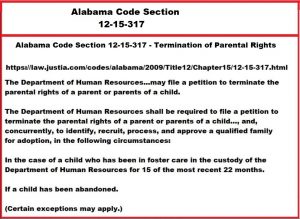 Link to YouTube channel where many/most of the Holm broadcasts are archived:

Link to article and public announcement of Brady Byrum’ secret meddling in the Baby Holm case, on behalf of C. Clarke & Danielle Holm:

Link to the 25-page letter the Holms mailed out, as crafted by Brady Byrum:

Link to Anniston Star Publication of “Service” regarding restraining order:

REQUEST FOR SERVICE BY PUBLICATION

IN THE MATTER OF:

The defendants Christian Holm and Danielle Holm, whose whereabouts are unknown:

You are hereby given notice that a Complaint has been filed by the Alabama and Cleburne County Department of Human Resources, Marsha Busby, Leslie Smith, Kelisha Feazell, and Stacey Jackson requesting that a restraining order be entered against you to enjoin and restrain you from having any contact with any of the Plaintiffs including but not limited to personal, phone and electronic contact and to restrain you from the Plaintiffs’ places of business, home or anywhere the plaintiffs may be found, and to enjoin you and restrain you from entering onto the premises of the Department of Human Resources.

You are hereby given that you are required to file an Answer with the Clerk of the Juvenile Court, 120 Vickery Street, Suite 202, Heflin, AL 36264 and with the Petitioners’ attorney, Tony Hamlin, within thirty (30) days of the date of the last publication of this notice or a default judgment can be entered against you.

A parent has the right to representation of this notice of an attorney in a dependency or termination of parental rights trial, and, if indigent, the Court may appoint an attorney if requested.

Should the parent desire a court-appointed attorney, application should be made immediately upon receipt of notice of this action, by contacting the Juvenile Court at 256-463-2651. 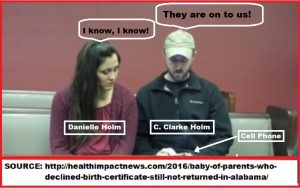 Link to article archiving the tale of the Holms’ Maine incident where the Holms pulled some sovcit antics and C. Clarke wound up in jail:

Latest, typical rant from C. Clarke Holm tending to confirm the report reflected in this article that “Baby Holm is free”: 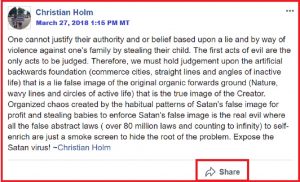 Danielle Holm now implicitly confirms that termination of parental rights has occurred or is occurring and that they have no intention of contesting it, and that they are moving on to pursue other interests.
. 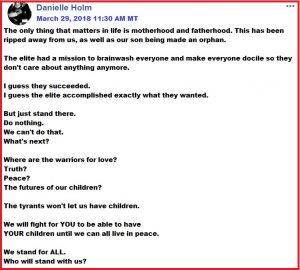 Susan Cobb, #1 cheerleader for C. Clarke & Danielle Holm has again popped off with her oft-repeated claim that they’ve got something secret going on that will “change things”.  No reason to believe that; it’s been a common theme since the beginning, and it’s never worked out for them.  The following link is to the thread in the FaceBook group “Dr Phil Expose CPS” where C. Clarke & Steven Allen & Susan were bantering today.
https://www.facebook.com/groups/DRPhilexposecps/permalink/866014893609695/

Later exchange in above-referenced thread wherein C. Clarke demonstrates again that he’s got nothing to rebut my position that the State’s actions as to Baby Holm have been legally and factually justified. 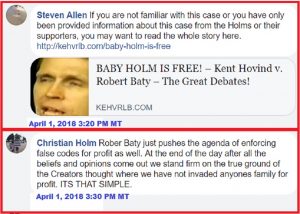 The following helps explain the Holms’ sovcit-with-a-religious-flair thinking that made termination of their parental rights inevitable. 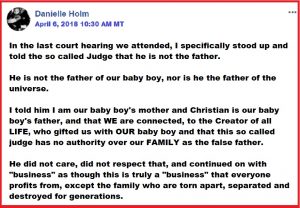