We asked our good friends in a quick change of plans to take down the group.

We were told if

1.) We took down our evidence and stopped exposing, and

2.) Got a place in Christian’s hometown, that the case could and would be transferred over immediately out of state and we could have our son back immediately after a home inspection.

So we immediately jumped in the car, and met up with a family member who calls himself “dad” and we started apartment shopping, thinking we would move in, have a new state come inspect and it would be over as we were led to believe. We were looking at nice downtown apartments that they would not be able to take no for an answer.

We were betrayed once again.

DHR has been communicating with this family member since the beginning, without our consent.

We caught them on the phone together as we walked in planning, conspiring, and it was not in our favor.

All lies to continue to keep our son from us no matter what we do.

We apologize for the confusion.

Our sweet baby is being used as bait and we are being controlled.

We are having to remain as strong as we can to deal with these principalities of darkness.

We are back on track now and even closer to God.

It is only God we can listen to and trust.

We have fallen but we will rise again.

When you are dealing with the authority of a tyrannical state, one must appeal to Caesar to try and find justice.

Back on the path now.

Thank you for your support.

Seems to clearly document (further) that C. Clarke & Danielle Holm are not above flat out lying about some things.  And I notice nothing to support their version of events.

Okay, so let me get this straight.

The Holms lie to the Schwab family that they are coming to Washington D.C. to support them and join in their protest.

They lie to the Cobb family that they are going to D.C.

They post fake updates of where they are all along the way.

They even shut down their own Facebook pages and started the shutdown of the Freebabyholm group, while blaming it on the government shutting them down.

And the whole time, it was a giant ruse to try to effectuate this hair-brained idea to establish a residence in another state under poor advice and information (from God knows who, but it certainly wasn’t DHR) that they received indicating that they would instantly get their child back when they did this.

And now, they are spinning the failure of this plan into some kind of anti-CPS rhetoric, falsely claiming that it was DHR who told them that they could implement this plan (which is straight up laughable).

And YET, nobody is mad at them.

The Schwabs don’t care that they lied to them.

The Cobbs don’t care that they lied to them.

Their followers don’t care that they lied to them.

Next, they will probably lie for them and say that they knew they were doing this all along.

They don’t even REALIZE that they have been used as pawns and that the Holms are STILL lying to them.

They are choking this story down, hook, line, and sinker, and they still think that it’s the Holms who are the victims here.

Why would they need to hide what they were doing and do it in secret if it was DHR that had told them they could do it in the first place?

That makes no sense, and the blind followers can’t even think critically for the 5 minutes it takes to see through the crap. 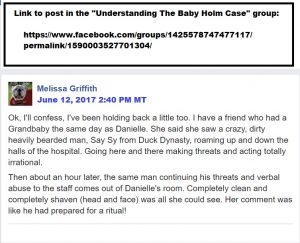