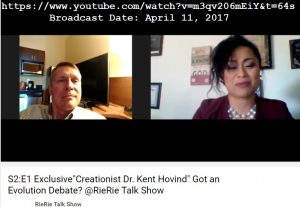 …the last question is now you recently was

just released, um, by the feds, I should say,

and, you know, people were much as well,

you know, the first thing that people see,

of course, well, he was convicted, he is a

felon, why was he in there.  People forget

that Jesus was also persecuted.  John, and

John the Baptist, and people through the

gospel has been wrongfully accused, has

been in prison, has been, I mean Jesus

Joseph in the Bible was convicted of

attempted rape on his boss’s wife. He went

to prison.  He went to prison for attempted

I can stand before God and say I did not

But you’re right, the feds had me; they came

ministry, and they said we want you to get

My DVD #5 of my series is where I talk about

the dangers of evolution.  It is the foundation

This theory of evolution is not only stupid, it’s

dangerous, and so that’s really why they put

me in prison; because of what I taught on #5

which is part of the series they get on

I said, what am I being arrested for?

They said, you’re arrested for structuring.

I said, what is that?

They said, 5 years ago you took your money

Yeah, we were building all of our stuff for, you

know, we had a bunch of college students

pick up truck and say, go buy shingles for this

we were remodeling the 3 houses we bought

or 6 houses we bought in the neighborhood

and for Dinosaur Adventure Land; for the

Never a crime at all.

Congress passed a stupid law that said if you

The bank can fill out all the forms they want.

So then the drug dealers started taking out

afternoon to avoid that reporting requirement.

And so Congress passed another law and said

break it up into smaller chunks, you have now

structured your transactions to evade the

all this stuff because they are going to think

you are a drug dealer.

didn’t inhale. I was just being stupid with the

Anyway, I never broke any laws at all, so they,

they arrest; my attorney said don’t even give a

defense, this is crazy, there is no law broke here,

It was never more than, not, not in one day like

it’s supposed to be.

So we could, we said we rest; no defense.

The judge then changed the jury instructions and

said if you find Kent Hovind took out less than

The maximum sentence was zero to 6 months.

The judge said, “this crime is worse than rape.

I’m enhancing this to 10 years.

They sentenced me to 10 years in federal

prison for structuring, taking our own money

out of our own bank.

KentHovindIsInnocent.com that, if you want

to really get all the details.

I didn’t break any laws.  The government broke

probably a hundred laws to put me in prison.

Then the U.S. Attorney went down after they

put me in prison, seized the church bank account,

stole all the money out of it, and then he got on

an airplane a couple of weeks later and flew to

Detroit to have sex with a 5 year old and got

arrested and hung himself in jail.

pervert.  So, you better check it out before you

I did not break any laws.

I did go to prison for nearly 9 years.

They moved me 32 times while I was in. 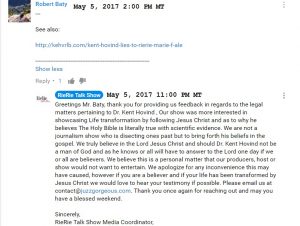 UPDATE: Is Marie going to let Kent use her show to promote his lies, again? 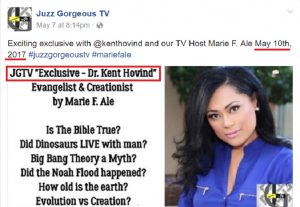 UPDATE: It gets worse!

UPDATE: So, I added the following to the comments section of the video:

Marie F. Ale mentions me by name in her latest YouTube video interview with Kent Hovind; around the 21:00 mark. 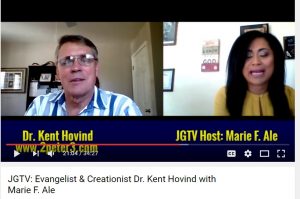 I posted the following in the comments section of the above YouTube video where Marie mentioned me by name:

Yes, I am one that uses my own name to challenge Kent to debate

his legal narrative and related matters.

Despite Kent’s oft promoted false legal narrative, even on your recent

show, Marie, he continues to run from and open, honest discussion of

his lies regarding his legal problems.

Marie, you have joined the ranks of others before you who are glad to use Kent and let Kent use you while refusing to allow open, honest rebuttal.

You want to promote a debate that likely will never happen if Kent makes it to your neighborhood, while refusing to produce the program I suggested to you and which would not involve near the logistical problems of the debate you are proposing on behalf of Kent.

That’s fine, I can only offer you the opportunity to show whether you prefer the truth or Kent’s lies regarding the legal narrative you allowed him to promote on your recent show.

Oh, wait, I think you have already showed your preference for Kent’s lies.

Marie disabled the comments to her latest interview with Kent Hovind where I had engaged her regarding her mentioning me and my availability to respond to her promotion of Kent’s false legal narrative. When comments were disabled all the pre-existing comments were deleted.

Before she disabled the comments, she and I had an exchange.  I did not keep a screenshot of the following, but the following does provide a quote of the message to me posted by Marie.

.
Subject: Response to your promotion of Kent Hovind’s legal narrative!

Thanks for the additional consideration.

You just posted the following note in the comments section of your latest YouTube interview with Kent, in response to one of my comments there:

Send me an email at marie@juzzgorgeous.com

for our interests is about Evolution vs Creation,

Is the Holy Bible True? Did we evolve from apes

or designed by a designer as God! Does the

Flood of Noah exist etc…Facts or Fiction or all

myth! It’s not whether or not we dove into his

arrest or what took place! This is our interest!

Alas, in your earlier interview you were most patronizing to Kent as he went on and on with his legal narrative which I claim is fundamentally false.

So, you don’t get to simply say you are not interested and refuse to allow for an opposition point of view; without consequences.

Not only that, as I pointed out, in your latest broadcast you specifically called me out by name and then included the following in your description box:

imprisonment as a political target go to:

You appear to have left out the link to Kent’s often promoted scheme prepared especially for him by Brady Byrum as found at the following link which Kent often makes reference to as he continues to try and fulfill his life-long commitment to promoting his false legal narrative:

So, if you want to meet what I consider your public obligations in response to allowing Kent to exploit your venue to promote his false legal narrative, maybe we can agree on the logistics and make the broadcast happen.

If you have time and are interested, I do have my Creationism 101 Critical Thinking Exercise which deals with the fundamental issues involving the hobby Kent has spent his life promoting.

The Exercise helps demonstrate, without worrying about the complex scientific stuff few are qualified to argue over, why it is that young-earth creation-science such as Hovind and others promote has lost the scientific and legal debates.

Here’s a link to my FaceBook page regarding that:

One of the sore losers I encountered recently involving the Baby Holm case and my group specializing in following that managed to talk FaceBook into blocking me for 30 days. So, I won’t be back on FaceBook for another 25 days or so.

Here’s the link to my Baby Holm group:

I could tell you a lot more about who I am and where I am coming from, but if you aren’t interested in producing a show allowing a response to what you allowed Kent to say about his legal problems, all that other stuff doesn’t much matter………unless you want to try and produce a show dealing with my Creationism Exercise and the Baby Holm case.