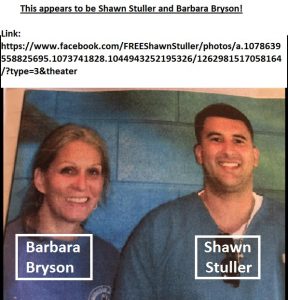 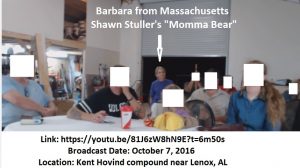 Kent Hovind and his co-conspirator Paul John Hansen met Shawn Stuller while the three of them were residents in the Santa Rosa Florida county jail.

Shawn, age 27, has gone on to become Kent’s most famous disciple and has started his own anti-government ministry with the help of Kent’s main YouTube promoters Rudy and Erin Davis (aka LoneStar1776).

Shawn is currently serving a 20 year sentence and operates his ministry from behind bars at the Blackwater State Correctional Facility in Florida; with the help of Rudy and Erin who regularly broadcast Shawn’s recorded phone calls.

The foundation of Shawn’s ministry is based on false and/or misleading claims about his criminal history and the case that resulted in him being sentenced to 20 years in prison.

With Rudy’s and Erin’s help, Shawn has developed a base of financial supporters, most of whom seem to remain veiled in secrecy.

In recent broadcasts, Shawn Stuller described Barbara Bryson as his “momma bear”.  Shawn has apparently been estranged from his own, biological mother and other family members and has developed a close relationship with Barbara who has now gone so far as to travel from Massachusetts to Florida to visit with Shawn and, according to Shawn, try to take care of the $63,000.00 he reportedly owes the State.

Shawn advised Barbara to visit and stay with Kent Hovind on his compound in Conecuh County, AL and she took Shawn’s advice.  Barbara was featured in one of Kent’s broadcasts as indicated by the image at the top of this page.

Kent Hovind appeared to reinforce the false and/or misleading claims about Shawn’s case that might have led Barbara to believe he was worthy of her moral and financial support.

It may be that whatever was going on during the time of Barbara’s visitations may constitute a violation of Kent’s conditions of his Supervised Release.

I look forward to resolving all the mystery surrounding this important public issue.

You will notice in the references below that, since this story has begun being reported, Rudy and Erin Davis have been tampering with the evidence by removing from public view some of the videos.

Therese Moore (aka herbielina) identifies a Barbara Bryson as one of Shawn Stuller’s benefactors:

Shawn Stuller talks of his “mom” coming down from Massachusetts:

Shawn Stuller talks about Barbara’s stay with Kent and plans:

Shawn Stuller talks about his “mom” and the financial matters:

– He gave me the best brothers and sisters,

And around the 8:40 in that video mark Shawn starts talking about how those financial matters are starting to work out.

Excerpt from one of several “sovereign citizen” documents filed by Shawn Stuller while incarcerated in Santa Rosa County, FL along with Kent Hovind and Paul John Hansen; showing that Shawn had been influenced by Hovind & Hansen to try sovereign citizen tactics (all three signed this document): 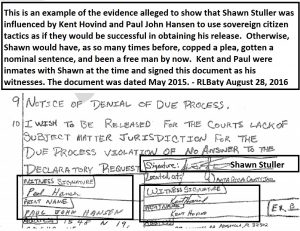 Shawn Stuller reports in a YouTube broadcast with Rudy Davis that Barbara Bryson is flying in to see him again, leaving tomorrow.  According to the report, she may find Shawn in disciplinary confinement.