Shawn Stuller, Kent Hovind’s #1 prison convert, was released from Florida State Corrections on March 1, 2019.  On March 5, 2019 he appeared in a performance with Kent Hovind from Kent’s 145 acre compound near Lenox, AL and the indications were he had moved in with Kent for the time being and was going to be helping Kent with his various and sundry construction projects. 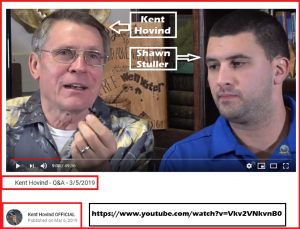 Peter J. Reilly reports on his trip to Kent’s conpound!

William and I started wandering toward what looked like a small desert, probably the most dystopian section of DAL.

All of a sudden we were being seemingly challenged by someone on a golf cart type vehicle. William and I were both in the “OMG have we gone out of bounds?” mode.  He assured us that it was no problem and we started talking with Shawn who has been at DAL for three weeks and hopes to be there for the rest of his life.  He was recently released from several years of unjust imprisonment on a trumped-up drug charge.
.
He offered to take us on an abbreviated tour that would pale in comparison with the big boy tour that Doctor Dino would take us on with the “mule”.  We saw the island with Slim the skeleton who is waiting for the perfect woman.  We saw the gazebo where weddings are performed.  I think he suggested that William might want to marry his girlfriend there.  That would really be something.
.
Shawn told us that he has taken responsibility for security and patrols the perimeter.  When I asked him about the bullet-ridden stop sign, he said it was not unusual to hear the reports of the firearms and they could note hits and misses from the pings.
.
Then we went to feed the fish (literally with fish food).  There were a lot of them.  He took us to see his hedgehogasaoous which was a rescue of sorts, which William, who is into animal rescue found touching. 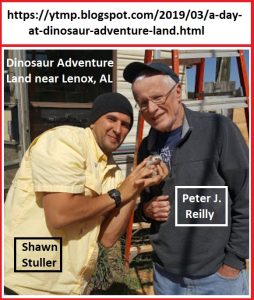