The above comments from Shara are in the thread at the above link and in the sub-thread which starts with the post below: 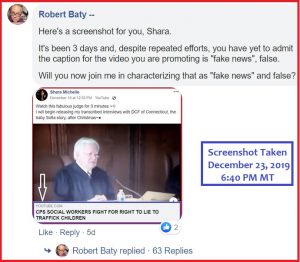 Links to other Baby Sofia articles on this site:

Link to one article on Shara Michelle on this site:

I had reported, as a rumor, that Baby Sofia had been removed from her present foster parents to another location as a result of concerns over security since the rhetoric being posted by Baby Sofia’s mother, alleged father, and promoters was threatening to the security and welfare of the baby and those involved in her care.

After that, Shara asserted that, as a matter of fact, the move had taken place but Shara characterized it as a “hiding” by the State and that for sinister reasons rather than the child’s and others’ security interests.

Repeated efforts were made to get Shara to explain the basis of her explicit claim, since she boasted of sticking to facts and not reporting rumors.

The above statements from Shara were made in the context of that discussion.

Further details about that discussion with Shara can be found at the link below which is for a thread about the matter, with more complete screenshots, in the FaceBook group “Kent Hovind’s Worst Nightmare”.

I have continued to try and get Shara to explain the basis for her claim that the State has “hidden” Baby Sofia, but she has been steadfast in her refusal to give an answer.  So, I add this to the record. 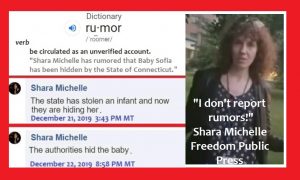 Shara didn’t like being challenged on the source of her claim that Baby Sofia has been “hidden”.