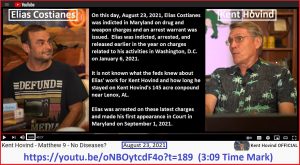 On August 23, 2021 a sealed indictment was filed in federal court as to Elias Costianes and an arrest warrant was issued.  He was arrested on September 1, 2021, processed, and released on the drug and weapons charges.  Earlier this year he had been indicted in federal court in connection with his activities regarding his January 6, 2021 antics in Washington, D.C.

There has been quite a bit of social media/news material published and broadcast about the cases, but none of them, as far as I can tell, have developed the story from the angle of Elias’ association with Kent Hovind and his people.

On the same day as the sealed indictment and arrest warrant were filed, Elias Costianes was found to be on Kent Hovind’s 145 acre conpound near Lenox, AL and appeared with Kent in a YouTube broadcast on that date.

Kent’s wife served about a 9 months in prison and Kent served about 8 years in prison, being released in 2015.  In separate, civil proceedings, Kent and his wife were found liable for millions in personal income taxes, penalties and interest.

Kent’s first wife divorced him after he was released from prison and came home unrepentant.  Kent quickly married another woman, Mary Tocco, a well-known anti-vaccination advocate.  That marriage didn’t last long and they split without benefit of a divorce.  After that, Kent quickly began living with another woman, Cindi Lincoln.  That relationship soured after a time and they have now split up.  They did not have a legal marriage and so just went their separate ways, while their personal issues remain unresolved.  Cindi wants $100,000 or so from Kent to replace money she provided to him for his business operations on his 145 acre conpound near Lenox, AL.  Also pending are a criminal charge against Kent Hovind for domestic violence and a temporary protective order.

Kent maintains “sovereign citizen” notions and an anti-government mindset and entertains similar sorts on his 145 acre conpound where many come and go.  Many have criminal histories of various sorts or other personal issues that “hiding out” at Kent’s conpound provides some relief. 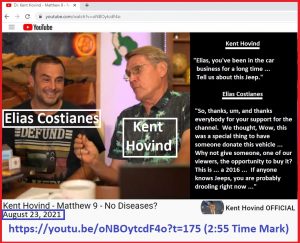 On September 1, 2021, the day of Elias’ arrest, Kent Hovind cryptically mentioned Elias’ problems in his YouTube broadcast on that date. 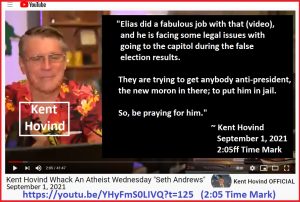 Time Marked Link to Elias Costianes YouTube Illustrating His Credits as to the Kent Hovind “Movie”: 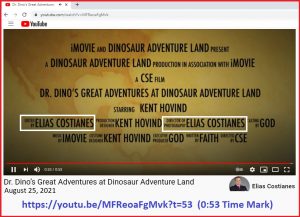 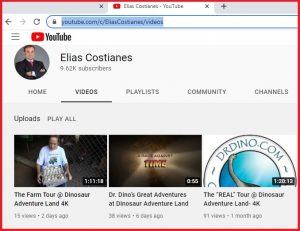 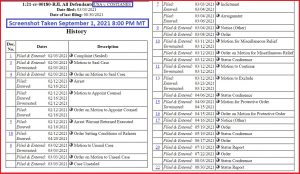 Conditions of Release as to Above Case:

News Article Regarding the Above Case:

An FBI spokeswoman said the agency arrested 42-year-old Elias Costianes in Nottingham on charges related to the January 6th riot at the United States’ Capitol. 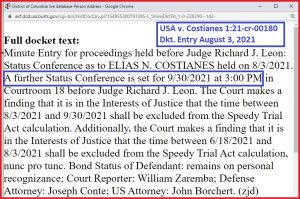 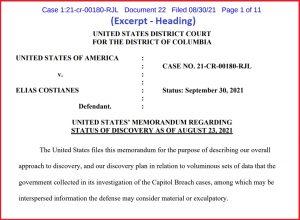 Baltimore, Maryland – A federal criminal complaint has been filed charging Elias Nick Costianes, Jr., age 43, of Nottingham, Maryland, for the federal charges of conspiracy to distribute and possess with intent to distribute a controlled substance and for possession of firearms and ammunition by an unlawful user of any controlled substance.  The criminal complaint was filed on August 23, 2021, and unsealed today upon Costianes’s arrest.  Costianes had an initial appearance scheduled today in U.S. District Court in Baltimore before U.S. Magistrate Judge J. Mark Coulson. Costianes was released under the supervision of U.S. Pretrial Services.

Docket Record for Above Case: 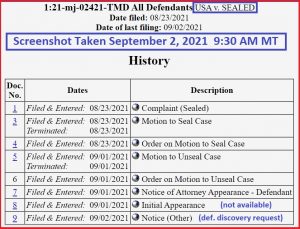 The full details regarding the connections between Elias Costianes and Kent Hovind and others connected with Kent Hovind have yet to be developed. 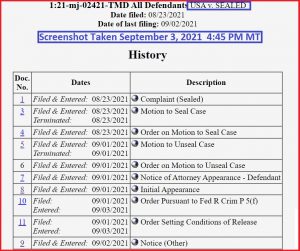 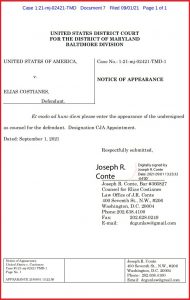 Elias Costianes posted another video on his YouTube channel today.  It is over an hour long and is a presentation of Kent Hovind’s “science center” tour.  The video, interestingly, does not present, as far as I noticed, a credits presentation (i.e., like noted above giving Elias credit for his part in creating the video). 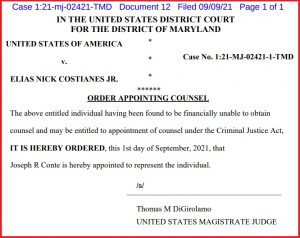 In his “Capitol Breach” case, Elias Costianes has been given new conditions of release and he has filed to suppress comments he may have made because he was not “Mirandized”. 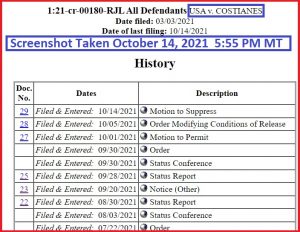 In the “Capitol Breach” case, Kent Hovind’s man Brady Byrum tried to file an amicus brief and was denied.  Otherwise, Costianes’ lawyer has filed a motion to dismiss. 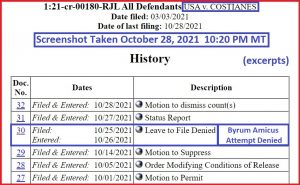 Department of Justice response to Costianes motion to suppress:

Sounds like it could be awhile before any substantive action in the Costianes cases! 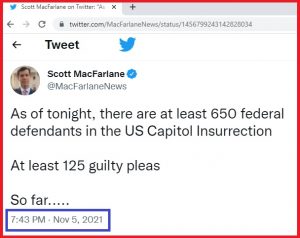 Government’s Response to Motion to Dismiss One Charge

Costianes Opposition by Feds to Motion to Dismiss Charge 11192021 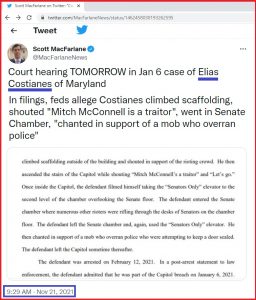 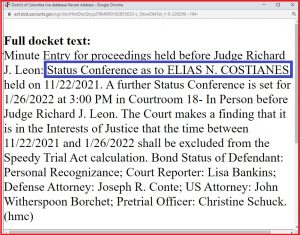 Looks like Costianes now has 2 federal cases docketed on the guns/drugs charges, but it appears the “Complaint” case is morphing into an “Indictment” case.

The “Complaint” case reported earlier above: 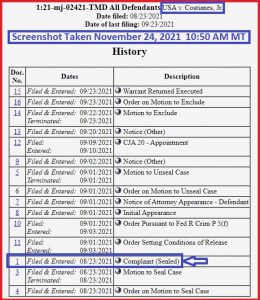 The “Indictment” case I just noticed and just posted to the docket: 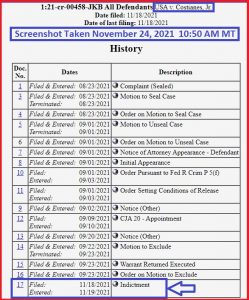 I just ran across this fund-raiser from Elias.  I am guessing it was first published back in September when his drugs/weapons charges Complaint was filed. 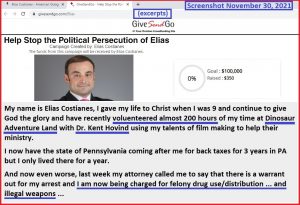 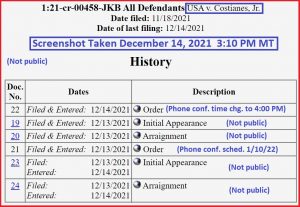 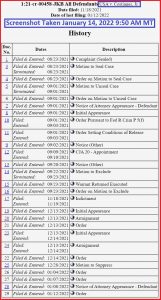 Elias Costianes due back in Court on January 26, 2022 on his “Capitol Breach” case. 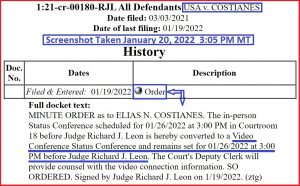 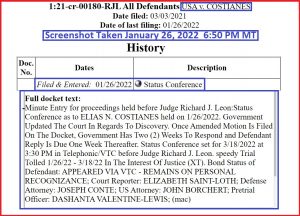 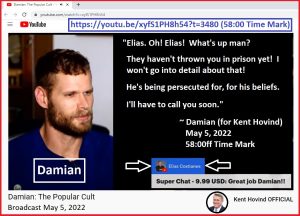 Elias’ cases are rocking along, but there has been some recent activity worthy of note.  Both recent docket records are shown below.  He now has a new federal public defender in his “Capitol Breach” case and has filed some motions.  In his drugs/weapons case there has been a superseding indictment filed. 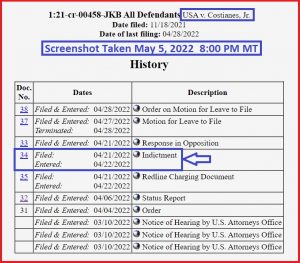 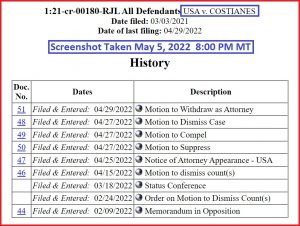 Costianes gets private counsel in drugs and weapons case 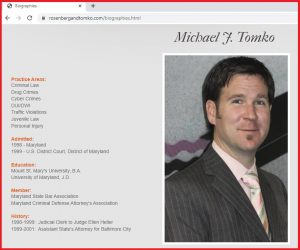 Elias Costianes looking for a new lawyer in his “Capitol Breach” case:

Peter A. Cooper appears on behalf of Elias Costianes:

Some Related Articles On This Website – Subjects Indicated in URLs