Don Boys, a former Indiana State Representative, aging preacher, speaker at Kent Hovind’s boot camp June 14-16, 2019, and recent topic of national news for his views on marriage and sex in the context of criticizing homosexuals and presidential candidate Pete Buttigieg in particular, and I had an email exchange regarding his views of Kent Hovind’s relationships with women, Mary Tocco and Cindi Lincoln in particular.

This article is intended to archive that exchange, for the record. 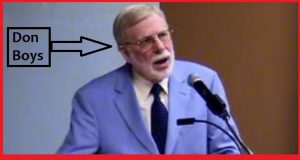 From: Don Boys
To: Robert Baty
Sent: Wednesday, June 19, 2019 10:32 AM
.
Robert, I appreciate your willingness to hold me and Kent accountable. I have had friends contact me about various rumors over the years and was pleased they did so. It shows courage and friendship. I don’t mind going on record as to my position on Kent and his ministry…
.
I talked with Kent at the close of the camp on Sunday. He answered every question without hesitation. Cindi was present and answered the few questions I asked her. He told me that Jo abandoned him his first day out of prison then divorced him. He stayed at home for nine months even though she refused to have anything to do with him. He even was forced to pay $600 per month rent in the house that he had paid for! Plus, his son took from him videos, tapes, books, etc., he had created, financed, and produced!
.
He said he married Mary thinking it was real and of God. After nine months of marriage, she was convinced by her daughter that Kent and his ministry were cultic and would be assaulted by the IRS and FBI. Arriving home from meetings about 1:00 a.m. he found her and her daughter leaving. He tried to convince her that all was settled with the IRS and the FBI was not involved but she was in a state of fear and left with her things–and some of his. .
.
He said that over the next few months, he spent about $20,000 to convince Mary that all was legal and well and she had nothing to fear. She refused to be convinced and refused to return.
.
He had been abandoned again.
The marriage was annulled.
.
He did some dating at the suggestion of some pastors.
.
He finally married Cindi who had come from California to work with him and had been there over two years.
.
They are both convinced that their marriage is legal and biblical and appear to be happily serving God in an unusual ministry. While no doubt he made some mistakes, he is trying to move on with his life and service for Christ.
.
My position is I will not abandon him as a friend and servant for Christ as I have other preacher/friends who became adulterers, child molesters, etc. It is one thing to mess up your life and ministry with sin and another thing to wallow in it without confession.
.
In His Service,
Don Boys
.

From: Don Boys
Sent: Wednesday, June 19, 2019 9:13 PM
To: Robert Baty
.
I thought you might respond in such an arrogant and self righteous way.
.
I did not ask for proof of an annulment.
.
As to his marriage to Cindi he had a biblical marriage not the kind that most preachers use when they say, “By the power invested in by the authority of the state of…”
.
Every preacher who uses a state marriage license is compromising although most do not understand the issues.
.
I wrote 9 or 10 articles dealing with marriage history and would never get a marriage license again as I did in ignorance.
.
You are wrong about the Baptist Temple.
They did bulldoze the church to the ground.
.
Even if they had not, the government stole the land and buildings from them.
.
I wonder how much you gave to support them, how much you prayed for them, and how many days did you spent there in support of their biblical stand.
.
Shame on you.
Don
.

From: Robert Baty
To: Don Boys
Sent: Wednesday, June 19, 2019 9:24 PM
.
Don,
.
Yeah, and I had you pegged pretty well myself.
.
Thanks for adding the claim about Kent’s and Cindi’s still undocumented marriage of whatever kind, wherever it was.
.
My claims, my allegations remain unrebutted.
.
See: http://kehvrlb.com/still-married-kent-hovind-mary-tocco
.
I think that was provided to you earlier, and you ignored it.
.
Thanks again for demonstrating your preference for the false narrative regarding the bulldozing at the IBT. The rest of your reporting was no better.
.
The shame is all yours, Don, all yours, but I do appreciate your consideration and the additions you have made to these important public issues.
.
Sincerely,
Robert Baty
.

There are a number of articles on this website reporting on the false claim that the “feds bulldozed the IBT”.  Besides Don Boys, Kent Hovind and his people, including Rudy Davis, have championed that claim as has Wiley Drake, another aging Baptist preacher that once was a player amongst the Baptists.

My Take on the IBT Matter

Here’s my take on what was really going on with the Indianapolis Baptist Temple (IBT) thing. I have mentioned it repeatedly, and have yet to be challenged on it.
.
The elder Dixon was a star among the Baptist and he started that church and over 40-50 years he built it up to a membership, reportedly, of about 8,000.
.
He began to fall out of favor with the Baptists and his anti-government theology started running people off.
.
The IBT property was becoming a millstone.
.
What to do?
.
It was clever, and it worked.
.
The feds wound up with the property and Dixon went down as a martyr for the anti-government wing of the Baptists, retired in luxury to Florida, and his son got to start over in Indianapolis.
.
As for the bulldozing, it’s not rocket science. The feds sold the property to a private school and the private school razed some buildings in order to make it into what they wanted. Yet, look what Kent and his people have made of that, claiming for years and years, despite my ministry, that the feds bulldozed the IBT.
.
Lot of similarities there to Kent & Eric Hovind.
.
Kent and his people include the elder Dixon as someone who claimed, or would claim, Judge Rodgers said “rape” at Kent’s sentencing.

I sent Mary Tocco a link to this article and solicited comments.  This is her response. 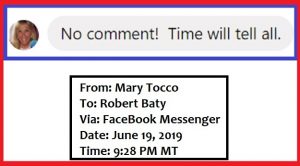