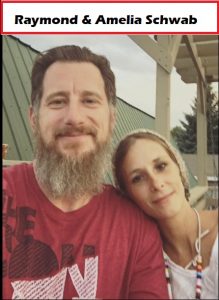 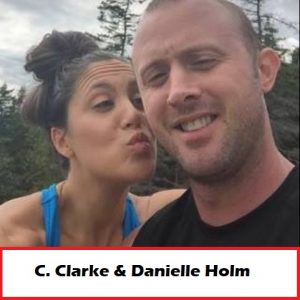 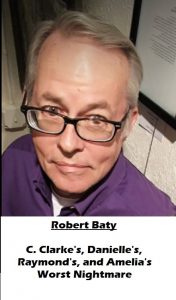 The long allied, anti-government families of Raymond and Amelia Schwab and C. Clarke and Danielle Holm appear to be calling it quits as a consequence of their partnership being emphasized in the context of an attack by Meko Haze upon Robert Baty in the “Truth About Jax” FaceBook group.

Meko Haze and the Schwab family share an alliance that runs deeper than anything the Holm family can bring to the relationship and it appears Haze & Schwab decided that the Schwab and Haze interests would be best served by severing ties with the Holms.

The opportunity for “filing for the divorce” quickly presented itself when C. Clarke Holm reappeared on FaceBook and began filing cryptic religious messages symptomatic of his long-suspected mental illness.
.

“Forgive me. There are stages to conscious growth that we must go through as one family on our planet. When one can perceive all stages and come together within perfect equilibrium this is called to be born again. For design and intuition ignite where patterns and substance collide to form what is called space and time. One must merge with all levels by bringing them back to one where the male and female flow within perfect equilibrium. One must be born again.”

“Brother. Nobody can hear you. The reason they can’t hear you…is because they have invested time, emotion and effort into your lives and your just babbling. Like you’ve broke your mind.”

Others have long been aware of the reported mental illness issues that C. Clarke & Danielle suffer from, and it appears Raymond Schwab, et al, are just now starting to take note where it becomes a convenient political tool for them in justifying the “divorce”.

Maybe we will hear more of that.

Meko Haze posted the following comment on my personal FaceBook page this morning, in the thread where this page was featured. 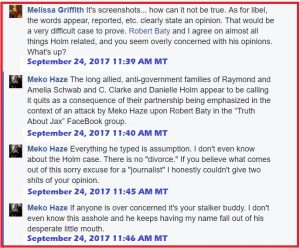 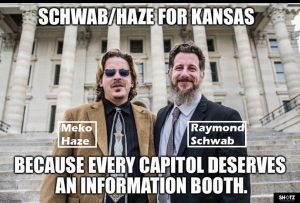 Meko Haze begins his most recent unwarranted attack on Robert Baty in the “Truth for Jax” FaceBook group! 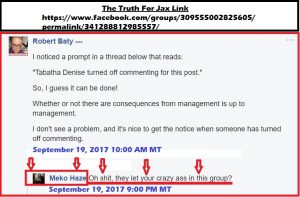