Jamie Wehrheim-Johnson was arrested in Avon, IN on January 24, 2021 after allegedly stealing merchandise from a Meijer store in Avon, IN.

Much controversy continues regarding the facts of the case and Jamie is currently in Hendricks County, IN jail awaiting further action on the case and an earlier case.

This article is being set up as a possible venue for presenting the various versions of the story as they develop and as the case might be resolved.

It was reported that Jamie’s boyfriend, Anthony Wiltsee, was with her when she was arrested on January 24, 2021 (see above).  At the time, he was released.

Details are not clear, but it now appears the investigation into that matter has resulted in the charging of Wiltsee in connection with the incident.

Wiltsee has a considerable criminal history, and that might make the consequences of his involvement with Jamie in this latest criminal (alleged) activity of considerable, unintended consequences. 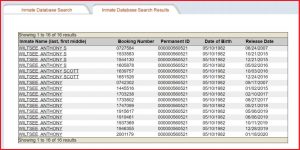 Jamie has gotten a bail hearing scheduled for February 25, 2021 at 8:30.  Maybe she’ll get out.  Maybe not.  Jamie was jailed on another case after she was arrested and bailed out on the Meijer case.

Link to portal for possible live stream of hearing:

Jamie did get out of jail based on time served and a finding of guilty, or no contest, leaving her Meijer case to resolve.  She had a pre-trial hearing on that case scheduled for March 9, 2021 (tomorrow), but the on-line docket record shows it has now been cancelled.  It may be that Jamie is posturing for a deal to settle that case without being stuck with being a “felon”.  Stay tuned! 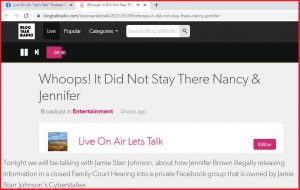 My earlier article on Jamie from 2018:

My earlier article on Jamie from 2020:

Jamie’s co-hort in the great daylight robbery of the Meijer store (alleged) is due in court later this week.  Since mail is being returned, there may be some question as to if he will show up. 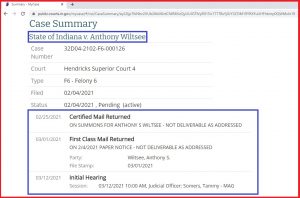 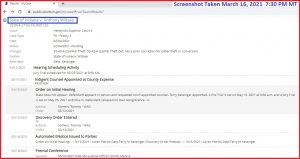 Reports indicate Jamie’s accomplice failed to appear for court and may now be a fugitive from justice.  Reports also indicate that Jamie may have agreed to accept a plea deal, with a guilty plea, to be filed in June, 2021.  Stay tuned! 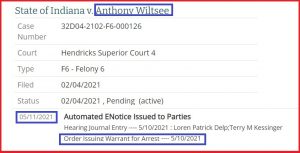 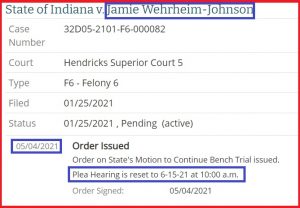 Looks like it didn’t happen today.  Maybe later.  There appears to have been a continuance for some reason; maybe Jamie playing games, delay, delay, delay.  Maybe not. 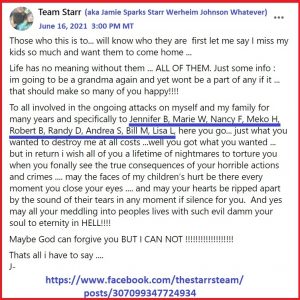 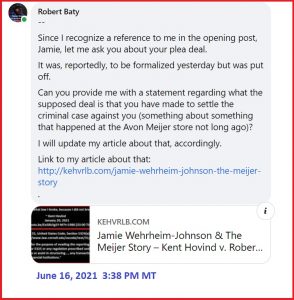 Jamie had a court appearance today and her intent to proceed to trial was affirmed and a trial date set for December 2021! 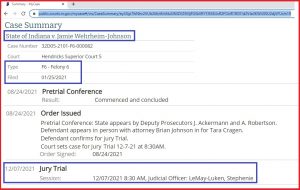 Jamie broadcasts some of her claims regarding the Meijer Incident! 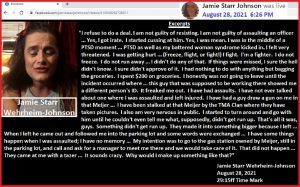 (Text of Above Excerpts)

“I refuse to do a deal. I am not guilty of resisting. I am not guilty of assaulting an officer … Yes, I got irate.  I started cussing at him. Yes, I was mean. I was in the middle of a PTSD moment … PTSD as well as my battered woman syndrome kicked in. I felt very threatened.  I was getting hurt … (Freeze, flight, or fight!) I fight.  I’m a fighter.  I do not freeze.  I do not run away … I didn’t do any of that.  If things were missed, I sure the hell didn’t know.  I sure didn’t approve of it.  I had nothing to do with anything but bagging the groceries.  I spent $200 on groceries.  I honestly was not going to leave until the incident occurred where … this guy that was supposed to be working there showed me a different person’s ID.  It freaked me out.  I have had assaults.  I have not ever talked about one where I was assaulted and left injured.  I have had a guy draw a gun on me in that Meijer …  I have been stalked at that Meijer by the TMA Clan where they have taken pictures.  I also am very nervous in public.  I started to turn around and go with him until he couldn’t even tell me what, supposedly, didn’t get run up.  That’s all it was, guys.  Something didn’t get run up.  They made it into something bigger because I left … When I left he came out and followed me into the parking lot and some words were exchanged …  I have some things happen when I was assaulted; I have no memory …  My intention was to go to the gas station owned by Meijer, still in the parking lot, and call and ask for a manager to meet me there and we would take care of it.  That did not happen …  They came at me with a tazer …  It sounds crazy.  Why would I make up something like that?”

More posturing by Jamie??  Rumor has it that she checked herself back in to rehab this week! 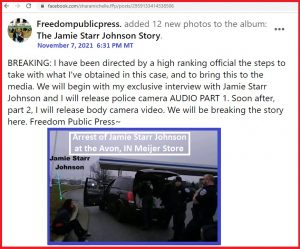 The case rocks along as Jamie appears to be playing games to drag it out! 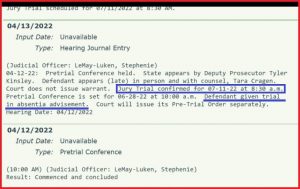 Looks like Jamie’s case may have been resolved.  Stay tuned for details. 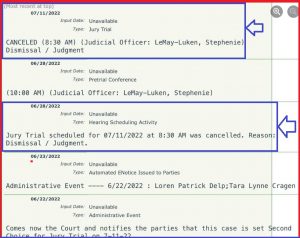 The reason sovcits do what they do so often is because it works; authorities have to make decisions and sometimes the whiners who weigh down the system are just not worth the trouble they are causing.

Especially is that the case, it seems, since the pandemic started and Biden was elected and the world started falling apart. 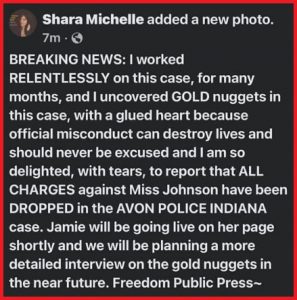