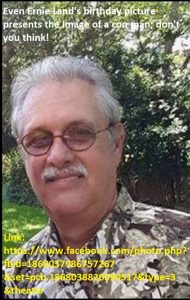 Ernie Land, Kent Hovind’s nominee handler for his corporate covers, managed to have an article published in The Monroe Journal, after that paper published an article announcing Kent’s plans for his Conecuh County property, an interview with Kent Hovind, and a response from Robert Baty, Randy Dunn, and Peter J. Reilly. 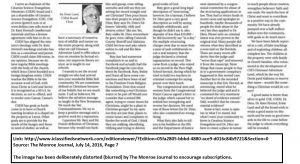 Link to clear copy of the above letter-to-the-editor from Ernie Land:

CSEM has aligned the ministry’s theology with Dr. Kent Hovind’s teachings and also has him as a consultant and pastor.  CSEM could claim 508 status, in my opinion, because we do have regular Bible meetings with the body of the church, which Jesus Christ founded as a foreign kingdom entity.  It is recognized as a 501(c)(3), by decision, as not to offend, and to render unto Caesar, Caesar’s due.

CSEM has goals as funds come in to have a Church meetng locaton in a chapel on the property at Lenox.  Other goals are to provide for the needs of the hungry and those in need of shelter, as well as have a sanctuary of conservation of wildlife and nature on the entire property, along with what we call Dinosaur Adventure Land to offer education on creation by factual science, not unproven theory of science, as is taught in our schools.

I wanted to set the record straight on who had arrived into your wonderful Bible Belt community.

We are sometimes defined as Christians because of our beliefs, but we are much more.  I call us believers.  We believe the salvation message as taught in the New Testament.  We teach the Ten Commandments.  We try to keep a positive message and a positive work for a reputation.

I question Mr. Baty and Mr. Dunn’s definition of Christian, because why would one backbite and gossip, even telling untruths and still say they are setting the record straight and are Christian?

They pour hours into their project to attack Dr. Dino.

Baty, Reilly and Dunn all have some connections and have been of aid to the Freedom From Religion Foundation.

Does that sound like something a real Christian wants to be part of?  Would one consider that a retired IRS agent, trying to create issues for Christians, might be a plant in Christian groups?

In my opinion, they are just that; plants to create issues and complaints to hinder the work of God.  I think they are stalking, identifying, villifying and trying to destroy good works of God.

Baty gave a good long legal description of “structuring”, however, for the layman, I believe Dr. Dino gave a very good description as well by saying multiple withdrawals, and though he didn’t say it, also deposits of less than $10,000 – he did incorrectly say “in a day”.

His multiple structuring charges were due to more than a year of cash withdrawals to run a real ministry that the judge declared a criminal organization on record.  This came from a judge, who stated so on record in the Pace High School lawsuit, during which she tried to hold two teachers in criminal contempt for saying prayer over their lunch.

Our congressional men and women from the Congressional Prayer Caucus signed a letter to the judge, which caused her to rethink her wrongdoing and reverse her decision.  we need on of those letters for Dr. Dino, who also committed no wrongdoing.

What Baty also fails to tell you is his buddies at the IRS and the Department of Justice were slammed by a congressional committee for the abuse of structuring applications in law.

They had to return funds in recent cases and apologize to hundreds, maybe thousands of people for their abuse in the very law they applied to Dr. Dino.

Please note, no criminal intent was ever proven in the original trial.

Many people did witness what they described as a S.W.A.T. raid on the Hovinds.

There were many sworn affidavits that the judge said “worse than rape” and removed it from the transcript.

More things that cause people to buy in to a government conspiracy happened in this storied case.

Another fact in the recorded transcript is that Eric Hovind, at sentencing, stated what he believed the judge said and it contained the very statement “no shred of evidence existed”.

Odd, wouldn’t that be circumstantial evidence?

Some is fact, some is opinion in what I’ve stated, but what I want your community to know is Creation Science Evangelism and Dr. Dino are here to create a place in nature to teach people about creation, strengthen believers’ faith and win souls.  We teach love of Christ and want to contribute in a positive way in the community.  We have already pumped over half-million dollars into the community, with goals to do much more.

We have been falsely reported as a cult, of false teachings and of exploiting children; all complete lies.

The children at the property were with a family or church families, who volunteered in the development of CSE’s Dinosaur Adventure Land, which by the way Mr. Dunn paid Alabama to reserve that name – sounds like something a Christian would do correct?

A good name is better than silver or gold, CSE, CSEM, Dr. Dino, Dr. Kent Hovind, Ernie Land and all the board wich to retain a good name on this earth and be seen as good stewards in the life to come before the judge to whom everything will be revealed.

The July 14, 2016 edition of The Monroe Journal included a lengthy, false, and/or misleading exposition from Ernie Land, a long-time friend and promoter of Kent Hovind’s business activities.

Kent Hovind was released from prison, after about 9 years, in the summer of 2015 and began 3 years of Supervised Release. Kent has recently moved to Conecuh County to develop 150 acres on Pearl Lane.

Despite the generally false and/or misleading nature of Ernie’s post, the more complete details of which I will not burden the community with in this message, there was something substantive that Ernie wrote that I thought might impress the editor as worthy of public notice via this message.

Kent Hovind has pledged the rest of his life to fighting to overturn his 2006 convictions for criminal employment tax violations, “structuring”, and obstruction.

Kent Hovind has, for years, along with his people, made the following unequivocal claim, or substantially equal claims, regarding the “structuring” law, a claim which I deny:

Structuring is when two transactions of

Ernie Land claims the definition I gave in rebuttal was “good and long”.  It wasn’t too long, but it was good and rebutted Hovind’s claim, and it was from the law and regulations used to charge, try and convict Kent Hovind.

What did Ernie say about it?

Besides having nothing from Hovind indicating a change in his position, even if that change is made Hovind and Land would still be wrong, as was evidenced by the definition from the law and regulations which I cited as stating, in relevant part:

“The transaction or transactions need not exceed the $10,000 reporting threshold at any single financial institution on any single day in order to constitute structuring within the meaning of this definition.”

Kent Hovind’s false legal narrative is built, in part, upon his “out of the blue” claim that he was wrongly charged, that his indictment for structuring was faulty because the singular withdrawals could not, legally, have constituted individual acts of structuring.

Ernie Land’s effort is, effectively, designed to allow Kent to continue that false narrative by refusing to admit to what the law and the regulations used to charge, try and convict Kent Hovind actually say and mean.

It’s “transaction (singular) or transactions (plural)”, and a singular transaction need not exceed $10,000 in order to constitute structuring.

In Kent’s case the singular transactions, made to evade the bank reporting requirements, constituted individual acts of “structuring”.  So says the law and the regulations, so said the indictment, so said the trial court, and so said the appeals court.

Kent Hovind’s position remains for debate and my challenge to him remains outstanding at such time as he might come out to me or send me his Champion..

The earlier articles and the latest articles, clear copies, can be found at the following links: