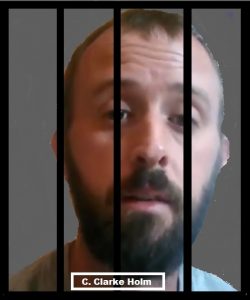 In recent days C. Clarke & Danielle Holm, the parents of “Baby Holm”, have been pressed for details of the recently admitted arrest of C. Clarke Holm and the towing of their vehicle.

In response, an account was posted to FaceBook which reveals an account of the incident but which leaves much to be desired as is typical of the Holms’ story telling.

It does provide further evidence that the Holms have been intent on practicing their sovereign citizen theology and in this case to the point of getting C. Clarke Holm arrested and their vehicle towed.

Did they say when that incident occurred?

Did they say where that incident occurred?

Did they provide a copy of the police report?

Did they name any of the police officers?

Did they say what final disposition was made of the charge(s) against C. Clarke?

Did they say what ID was provided by C. Clarke that was considered “false”?

Did they give the name of the “Native American Tribe” they were going to see?

Did they say where they had just come from before being confronted by the police?

Did they give the status of whatever it is they are trying to accomplish with that mysterious “Native American Tribe”?

Did they name their “acquaintances” that came and picked up Danielle?

Did they provide any pictures or audio of any of the events?

Are they, have they ever been “fighting for” Baby Holm?

Did they explain how they were able to buy that new car and in what state?

Did they name who they accuse of accusing them of hiding things?

Did they give the name of the state they consider their “home state”?

Did they name the state that issued the “temporary tag” for their new car?

Did they adequately explain why they towed the car out of Maine if there was no problem with the tag?

Do the Holms like to lie, misrepresent things, and keep secrets?

The controversy arose after Robert Baty noticed the following thread and posts on the FaceBook page of DeWayne Brothwell: 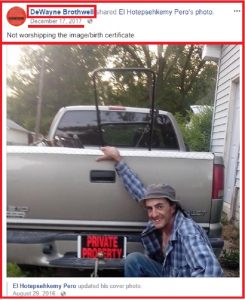 Brady Byrum, Kent Hovind’s man who helped the Holms develop their sovcit legal strategies from the beginning, is still around and may still be involved in the Holm case.

Link to thread on FaceBook page of C. Clarke Holm:

Post by C. Clarke Holm to his #FreeBabyHolm FaceBook group and which explains why they had trouble in Maine (i.e., an apparent sovcit tag on the vehicle):