Susan Cobb has come a long way in the C. Clarke Holm operation out of Heflin, AL since I first encountered her and her misguided notions regarding the Baby Holm case.

See archived exchange on this page between Susan and me at:

Susan Cobb has emerged as the leading promoter for the misguided cause that C. Clarke Holm and Danielle Holm have taken up under the guise of wanting to have Baby Holm returned to them.

In a couple of messages today, May 25, 2017, Susan has again demonstrated that it’s not about Baby Holm; it is about the anti-government, sovcit theology and cause.  Those messages are shown below, with graphics for verification.

There are good reasons why Susan’s representations are considered a false narrative, the “false Holm narrative”.  That’s what it is and her 2 messages below further confirm that characterization.

There are good reasons why C. Clarke Holm and Danielle Holm will not face me or other competent, informed adversaries in order to address the factual and legal issues relevant to the Baby Holm case.

Primarily, it is because C. Clarke Holm and Danielle Holm cannot handle the truth.

One reason for this is because of their invocation of “god” and things religious as if that were a free pass to exempt them from the laws of the land.  That they also appear to claim to have direct, personal, and literal communications from their “god” should be of concern even though their “god” is not a party to the proceedings and such religious claims are not relevant to the resolution of the Baby Holm custody matter; at least they don’t trump the objective facts and law.

My challenges to C. Clarke Holm and Danielle Holm remain outstanding for such a time as they might come out, come clean, and openly and honestly pursue a reasoned and reasonable discussion of the facts and law applicable to their case; or send out their Champion.  See other articles on this site for details.

Fundamentally, it seems quite simple.  Given the antics of C. Clarke Holm and Danielle Holm, the State of Alabama simply has to let the process play out, parental rights be terminated, and Baby Holm be placed in a permanent adoptive home.  C. Clarke Holm and Danielle Holm, according to reports, have done nothing to affect a change in that indicated course.

Susan Cobb, in her messages today, indicates they have been well aware that this was where the case was headed, and so that appears to be the case just as intended by the course chosen by C. Clarke Holm and Danielle Holm.

It may be that C. Clarke Holm and Danielle Holm never intended to parent the child and knew all along that they could never, for good reason, demonstrate satisfactorily to the State of Alabama their ability to do so.

According to Susan, the intent now is to make a lot of noise and get some publicity for their anti-government, sovcit theology and related causes.  It could get interesting, even while Baby Holm remains in a better place and, ultimately, with an adoptive, permanent family.

UPDATE: Susan’s husband, Robin, has posted a message to the #freebabyholm group indicating that the judge in the case had ordered that C. Clarke/Danielle Holm make no more filings; apparently because they had been filing nothing but frivolous, sovcit notions.  Nothing unusual about that. See graphic below.

For anyone who would be misled by the statements the Holms only care about their rights you need to know they have surrendered all their rights to their Creator.

They seek to hear from Him about anything they should do or say.

Apparently the state remains nervous about a defense built on rights.

Let’s see how they do with their actual defense, a cry for help to come from heaven.

We are well aware, Amy, of how many have lived through it. We have connected with a mutitude of groups who are filled with people who lost their children for no reason. One group alone has over 1000 kids. #Taken.

You also are choosing to ignore all the facts presented in this case.

The very last thing Christian and Danielle care about is their rights.

The only thing they care about is their child.

If a couple hundred people get on here and spew the same false mantra, that will still be true.

With nearly four thousand followers who are permitted to comment on their site you better believe we expect more than a few to be representing state’s interest.

Others following the same line of thinking will be influenced by the oft repeated misstatements or by the fact they haven’t read the truthful facts available.

It was always going to end up as a TPR. (Termination of Parental RIghts-RLBaty)

Initially the Holms, although horribly traumatized and violated, had hope in the system they, as law abiding good citizens, had always lived by.

The only defense remaining in a completely lawless civilization is constitutional.

It won’t make any difference in the plan this county has always had for this highly marketable child, but it will show the blatant disregard for rights God gave to each of us at birth.

And when this sacrificial lamb is gone everyone will realize they are next.

No child is safe.

This record will then have a greater meaning to everyone who participated in this reality show public trial by doing nothing or worse, standing in judgment against the victims.

You may also then understand how easy it was for the Nazis to take over. It was with permission.

BUT, this is yet a free society.

We have the appearance of rule of law.

We have brave legislators who are willing to risk their lives to defend the Constitution.

They first must be presented with the outcry which permits them to work.

The sheriffs must be presented with the outcry which gives them courage.

The pastors must be willing to take a stand in the pulpits AND visit us on the street corner.

The moms with new babies they can lose must be willing to share our story found on #freebabyholm or facebook.com/stillworkingforJesus.

I would give you a different and better media reference but so far we are the only ones covering the actual truth so we are the best for now.

Hey, a president got elected with social media,

God once spoke audibly through a donkey, so why not me and you?

UPDATE from Susan May 25, 2017 – Admits, implicitly, that all the work being done by Baby Holm’s parents have been in pursuit of developing their sovcit theology and frivolous filings and courtroom antics.

I can attest to the fact that they have been doing everything around the clock nonstop and at a frantic pace, trying everything.

Facebook world has no idea of what they have been accomplishing.

Danielle has practically earned a law degree in what she has been studying, they have reams of paper, make nonstop trips to the court filing motions and appeals, file complaints outside the district and barely take time to walk the dogs.

The judge threw everything out.

All of their appeals.

He told them in court they not only had no religious rights but they have no constitutional rights.

This is CYA special treatment from a state who made an oopsie with taking the wrong baby and they have to make it good.

This judge is a criminal judge with many years experience in family law.

They assigned him to the case to make sure they got special treatment.

They remain surrendered to the Creator.

If people knew all they have done and are doing the state would still fill the site with trolls to criticize them so we don’t bother.

We also pray a lot.

They did so much wrong when they took the baby initially amd now they are stuck.

Special treatment is they are doing everything possible to showcase the Holms as mental cases.

They are not even regarding them as human.

Since nobody will do anything about the kidnapping and mistreatment by all the authorities (who are operrating in concert) then it gives the best chance to produce some kind of reaction.

Who will prove it aint so?

There is talk of force medicating Christian and soon they will be able to incarcerate him for failing to pay child support.

I don’t think the state is worried about much.

They hold all the cards. 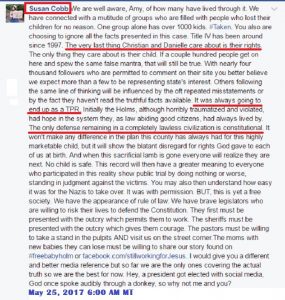 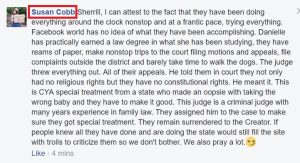