Eric Philpot is the Baptist preacher that Kent Hovind was able to find to sanctify his relationship with Mary Kosloskey Tocco.  Eric operates what he likes to call a “Patriot Baptist Church” in Allen, TX.  It is also called the Cross Life Church.

Eric performed a common law wedding ceremony joining Kent and Mary in marriage, according to Alabama law, on September 24, 2016 somewhere on Pearl Lane in Conecuh County, AL, which is where Kent is building his retirement home and compound.

Since that time, Eric has been posting weekly sermons in what appears to be an effort to justify his position regarding Kent, and Mary, and Jo Hovind (Kent’s ex-wife), and attack critics such as Steven Anderson.

Kent Hovind was to appear before Eric Philpot’s church on October 16, 2016. While the time for that appearance by Kent has passed, no broadcast of that appearance has yet appeared on Eric’s YouTube channel.

In that first video referenced above, Eric boldly proclaims that he, when providing marital counseling, “fights, fights, fights, fights” for the family, and he also claims that he requires that those involved in sin regarding the break up of marriages repent of their sins related thereto.  Eric then goes on to claim that he knows the details of the Hovind situation because he has counseled with Kent and Mary and can pronounce with confidence that neither of them are guilty of any sin regarding the breakup of Kent’s marriage to Jo Hovind.

(How convenient for you, Eric.  You see no sin on Kent’s part and so dare not call him to repent of what he has done to Jo that contributed to her decision to divorce Kent.)

Maybe Eric will engage in a discussion with me regarding such things.  Maybe not.

I left comments following his first video referenced above and gave him a link to this website. 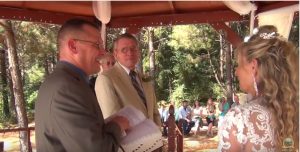