In his performance tonight, October 7, 2016, Kent Hovind talks about the case of Shawn Stuller and lies about it and his connections to it.

The discussion is between the 5:20 and 8:40 marks in the following video and includes the introduction of a guest and big supporter (i.e., financial as well as moral perhaps) of Shawn’s; Barbara (See Footnote #1 below) from Massachusetts, possibly Barbara Bryson (Later: confirmed that it is Barbara Bryson; see update below) who is mentioned in at least one of Rudy Davis’ (aka LoneStar1776) videos promoting Shawn’s cause. 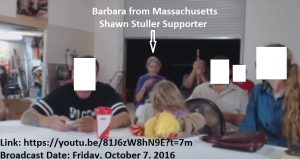 I and others have been following Shawn Stuller’s case because of its association with Kent Hovind and his convicted co-conspirator Paul John Hansen and their sovereign citizen theology.

Shawn met Kent and Paul while they were all in county jail together.  Shawn has a long rap sheet and things were starting to get serious with his latest criminal activity.

Kent and Paul convinced Shawn to try their sovereign citizen antics instead of making a deal as he had always done before and which typically put him back out on the street without any serious jail time.

So Shawn tried that and, of course, it got him nowhere.  Because of Shawn’s problems with lawyers, private and public, he is the one who caused his case to drag on and ultimately get scheduled for trial after a number of delays.

The judge was not of a mind to allow any further delays and Shawn was not properly prepared to try his case (i.e., still had lawyer problems and couldn’t seem to get any witnesses, or even his mother, to show up for the trial/sentencing).

The judge was not pleased with Shawn’s further attempt at delay and was going to proceed to trial.  Shawn decided to do what he had always done before, plead out.  In this case it was a blind plea and he would be at the mercy of the court as to sentencing.

Because of Shawn’s antics, the State introduced his criminal history which resulted in him being classified as an “habitual felony offender”.

Kent didn’t mention that the crimes in this case not only included illegally entering a residence, but also stealing controlled drugs [enough of them to qualify as him as a “trafficker”), defecating in the kitchen sink, and stealing some other small item(s)].

Shawn had a change of heart, still playing games, and decided to try to withdraw his plea before being sentenced.  Shawn claimed some unnamed criminals who were in the courthouse when he was sent for trial threatened him into making the plea.

The judge didn’t buy it, and when Shawn came back for sentencing he got the 20 years; all thanks to the influence of Kent Hovind himself and his co-conspirator Paul John Hansen whose sovereign citizen antics not only failed but put Shawn in a worse case scenario instead of allowing him to plead and get a sentence that could have resulted in him being free today, October 7, 2016.

Shawn recently filed his appeal brief, through a private attorney whom Kent’s visitor Barbara may have helped to significantly finance.  The State’s reply is due soon.

Maybe Shawn will get a do-over, but it appears unlikely.

More important from the aspect of my coverage is that failure of Kent Hovind, Paul John Hansen, Rudy Davis (LoneStar1776), and Erin Davis to accept responsibility for the roles they played in putting Shawn away for 20 years, barring a successful appeal and subsequent developments.

If Shawn gets a do-over, his prospects might be greatly improved if he could get Kent and Paul to admit to their responsibility as to how it all played out and the three of them would admit to just how silly and frivolous their sovereign citizen antics were.

Maybe we will hear more of these things as Shawn’s case develops and Kent’s indirect connections to Shawn continue. 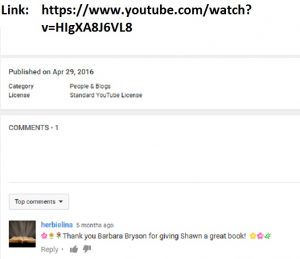 From Shawn’s latest performance (transcription by Robert Baty):
Posted October 7, 2016 by Rudy Davis (aka LoneStar1776)
https://youtu.be/k6bK3YjNGwk?t=1m
Shawn Stuller states:
Guess who was at Dinosaur Adventure Land baking
a pear and blueberry pie?
Momma Bear, Barbara Bryson.
She stopped by, she was scared.
She said, “I don’t know, what should I do?”
I said, go to Kent Hovind, go to Dinosaur Adventure
Land.
You go there now.
She was like, “OK, I’m going”.
She got there, within 5 seconds she said,
“Hey, I’m visiting Shawn Stuller”.
He said, “Shawn, OK, hop on the back of this
4 wheeler”, and they accelerated to 40 miles
per hour.
She said that was the most scariest ride of
her life. She lost her glasses.
He said, “You wanna go faster?”
She said, “Noooooo, I can’t handle thiiiiiiiiiis”.
And he was speeding her along geting her to
the facility, the main facility.
She’s there now.
They are in bible study.
And we didn’t have to pay for a hotel here.
She’s camping out at DAL for 4 days now.
She’s going to see me Saturday and Sunday.
…
https://youtu.be/k6bK3YjNGwk?t=3m50s
Shawn Stuller states:
She (Barbara Bryson) saw “RacerX”, remember “RacerX”?
He (“RacerX) was driving his wife. His wife asked to take
over the pie, my mom, to taste it…to take over the pie.
She did, and they went to dinner, and when she got off
the phone with me, he was pulling out, he said, “Who
was that on the phone?”
She said, “Shawn”.
He said, “Oh, let me talk to him.”
…
———————————————————————————-
UPDATE: October 8, 2016 at 5:40 PM MT
Speaking of secrets, I went back to Shawn’s October 6, 2016 performance and found the following which tends to confirm that there are things Shawn and his people (i.e., Rudy, et al) don’t want everyone to know (i.e., like the truth of what is really going on).
https://youtu.be/cSz0nbJzSDU?t=4m5s
From earlier October 6, 2016 broadcast
Shawn states:
Mom’s flying in from Massachusetts, tomorrow morning,
God bless.
We’re going to have a visitation Saturday and Sunday.
…..
So thankful I am going to be able to see her.
Not sure who else is coming.
….
If you want to know what is going on in my life, secretly
email Rudy. Rudy, I give you permission if you want to
tell people exactly what to pray for, what’s going on.
——————————————————–
UPDATE: October 8, 2016 at 7:40 PM MT
Barbara Bryson may have intentionally or by design of others become party to assisting Kent Hovind and Shawn Stuller to violate rules prohibiting their direct or indirect contact.  It would not be the first time Kent was caught violating the rules regarding such things.  See video below:
https://www.youtube.com/watch?v=Ji5nXv8XRmA
———————————————————————–

Is she (Barbara Bryson) coming back,
or was she just there today?

Yeah, tomorrow too.
She’s back at Dinosaur Adventure Land,
hopping on the top bunk in the hen house.

She’s going to get a good night’s sleep.

She bought an inner-tube today, floated.
I think she almost fell asleep and the drift
almost took her down the beach, but she
woke up in time and was able to come back
and enjoy the beach.

This is the second time she has been at
the beach….

…driving back to DAL, it’s fend for yourself
Saturday and Sunday…eat all the leftovers
and there is a sausage festival going on
today so that is where everybody was at.

It’s really cool that Kent’s vision came true
and that my mom (Barbara Bryson) there,
she can come and she can stay there and
then come visit me…

UPDATE: October 10, 2016 at 7:00 PM MT
BARBARA BRYSON – VICTIM????
KENT HOVIND – ACCOMPLICE????
RUDY DAVIS – ACCOMPLICE????
ERIN DAVIS – ACCOMPLICE????
SHAWN STULLER – RINGLEADER????
I report, you decide!
Have we witnessed a prisoner scam play out in recent days?
Is it getting that serious?
In recent days we noticed that Shawn had announced he was cutting ties to his old life, including with his family members who weren’t willing to join him in his religion venture.
It was documented that Shawn refers to Barbara Bryson as “momma bear”, “mom”, and I somewhat sarcastically added “sugar” to the label. My addition may be more true that at first realized.
Barbara Bryson, it was recently documented, showed up in one of Kent Hovind’s videos and introduced herself as having come from Massachusetts to see Shawn and Shawn reported that he had been the one to suggest that she visit and stay with Kent Hovind instead of spending money on hotels/motels while visiting Shawn.
Well, I happened to again take a few minutes to browse Rudy’s broadcasts (where are my co-administrators/investigators when I need them) and came up with the following which, to me, suggests, as I had speculated, that Barbara Bryson has been taken in by Shawn’s, Kent’s, Rudy’s, Erin’s, et al, scheme and been shelling out a lot of money in support of Shawn.
Is Barbara making informed decisions and is Shawn Stuller, Kent Hovind, Rudy Davis, Erin Davis, et al, really causes she wants to finance?
I’d like to have that discussion with Barbara and find out just how informed her decisions regarding Shawn are.
If she’s not a victim, why all the secrecy.
If she’s not a victim, we still have learned more about what they have been keeping secret from us.
This post is based on the following which I just ran across:

In this October 4, 2016 broadcast, Shawn makes it sound like he is just finding out about how much money he really owes (i.e., the $50,000 fine imposed in conjunction with his latest criminal case plus old traffic fines and other amounts which I think he says now totals $63,000).
(excerpts)
0:40
I can’t get my license until I pay it.
0:50
My “mom” is paying my debt to the DMV,
to the Escambia County Courts and the
Santa Rosa County Clerk of Courts…
2:00
My “mom” is coming all the way from a far
away place to come and take care of it.
Let’s pray that everything goes well…
(Go to video for continued discussion.)
——————————————————–

– He gave me the best brothers and sisters,

And around the 8:40 mark Shawn starts talking about how those financial matters are starting to work out.