Her testimony has yet to be confirmed, but it appears to be a credible report from what I know about her and my contact with family members.

I have now received the following redacted email message from a 3rd party with contact with Diane Hovind that calls into question Theo’s report.  It may be that Theo’s report reflects Diane’s sentiments even while not being her direct testimony to Theo.  Maybe we will learn more about this later.  Maybe not. 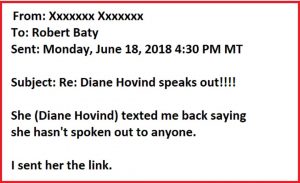 I am married to Kent’s brother, and knowing him for over 40 years, I can tell you that Kent is nothing like he would have you believe. Kent’s ministry being his mistress is exactly on target. Kent was a tyrant as a husband from the first day of the marriage.

He is arrogant and narcisstic and the true example of a Pharisee.

His priorities have always been:

1. Kent and his needs

.
2. His ministry and maybe God came in number

third and his wife and family were at the bottom of his list.

He emotionally and spiritually abused his wife Jo for the whole marriage. He never loved her like Christ loves the church or treated her with kindness. She was in a subservient role.

He never cared about his kids interests and did not attend any of their activities or functions.

His pride was so strong and he constantly bragged about how many times he preached or how many people he saved. I believe God used Kent in spite if himself. In the Bible, God talked through a donkey.

Not one member of Kent’s family supports him, because we all know him too well. He is judgmental, arrogant and has no compassion.

I find it pretty ironic that he judged everyone who divorced as wrong and now it’s OK because he wants to get remarried.

Kent’s wife and Children have so much integrity and Christian ethics that they are not responding to Kent’s ridiculous YouTube videos.

What kind of a Christian man would publicly insult and condemn his family.

Also. many of the things he says are outright lies.

I could go on and on and give examples but mostly I want people to know the truth about Kent. 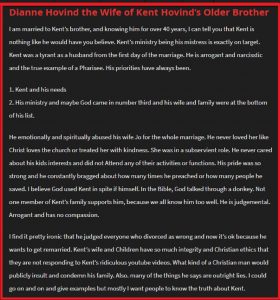