In a broadcast performance on September 9, 2017, Kent Hovind once again affirmed his false legal narrative and his promotion of the effort by Brady Byrum to establish his innocence.

Kent continues to refuse to come out and face the issues.  My challenge remains outstanding as to Kent Hovind or his Champion of choice. 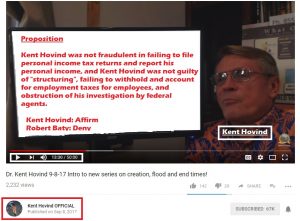 Link to clear copy of above image:

…in 2006 our ministry in Pensacola was raided by a group of IRS agents and a SWAT team.

They said, “you are being arrested for structuring.”

They said, “five years ago you took money out of the bank in amounts less than ten thousand dollars.”

So we went to trial.

It was a complete bogus sham trial.

My attorney said, “Kent, don’t even give a defense. There’s no crime here, and there was no crime.”

Go to the YouTube or the series of videos on KentHovindIsInnocent.com.

Especially watch number three, but if you can’t watch ’em all, I’d suggest you watch them all.

I did not commit any crime whatsoever and everybody that writes and studies this knows that, but long sad story.

My attorney said, “Kent don’t even give a defense. There’s no crime.”

So I did not give a defense and the jury said, after they changed the jury instructions and the judge told them to find me guilty, which, to which we objected.

Anyway, they said, “Okay he’s guilty,” and so the judge sent everybody home.

They sent me straight to jail, and then called me back in three three months later for sentencing, and said, the judge said,

“well sentences for this crime is usually zero to six

months but your crime is worse than rape.

I’m enhancing this to ten years.”

Gave me a ten year sentence in federal prison for structuring and for not withholding taxes from employees; that was five years running concurrent.

It’s all explained on KentHovindIsInnocent.com.

Bottom line is I spent nearly nine years in federal prison; got moved 32 times all over the country.