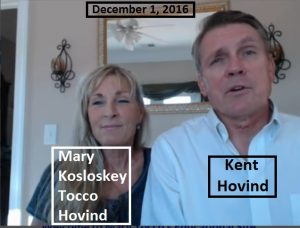 Kent Hovind’s brother had polio as a child and, as a result, had one leg 3/4 inch shorter than the other for the rest of his life.

I have heard from a reliable source (i.e., see prior claims about such sources as made by Kent Hovind in attacking me) that Kent Hovind’s claim about his brother is false.

So, I have added that issue to the list of propositions for Kent and I to consider at such time as Kent may decide to come out and accept my challenge to have an exchange of ideas regarding his legal/tax and related matters which are much in dispute. 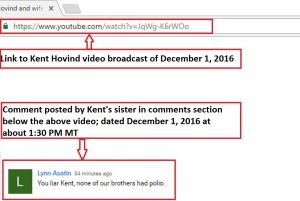 “I remember my own brother getting polio and having a leg 3/4’s of an inch shorter than the other one the rest of his life, and I remember so many people getting polio and a lot of it from the vaccinations.  They caused this disease and they didn’t eradicate it; they renamed it.” 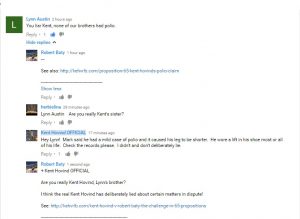 It appears the Lynn Austin comments thread below Kent Hovind’s video was deleted about as soon as I posted my comment above.

I would call that “consciousness of guilt”; that Kent has again been caught in a lie.

Recall also that Kent and Mark were estranged for a long, long time; allegedly because it was Mark who had come to the rescue of Kent’s 2 year old son Andrew whom Kent was refusing to be allowed normal medical care where Andrew had been running a high fever for days (leading to life-long disabilities for Andrew).  There are separate articles on this page dealing with that matter.

Also, since the thread appears to have disappeared, I have to wonder whether the poster was really Kent Hovind or just his surrogate in disguise.

Kent has since posted another video and I noticed that “herbielina” (aka Therese Moore, one of my more cordial Hovind adversaries) had posted some comments and so the following exchange has taken place today.

From the Comments Posted December 3, 2016

1. From “herbielina” (aka Therese Moore)

I didn’t notice your answer.

What did you decide?

Was that really Kent’s sister that accused Kent of lying about Mark Hovind having had polio?

What do you think?

I think it was really Kent’s sister and that her claim is more credible than Kent’s (i.e., Kent really was lying about it and whoever posted that lame excuse under the ID of “Kent Hovind Official” was compounding the damage by trying to cover up the falsehood. Of course, tampering with the evidence as was done adds to the problem.

3. From “herbielina” (aka Therese Moore)

She didn’t answer me, so I cannot confirm or deny.

However, since Kent jumped in and said part of the family believes a different diagnosis than the sister.

BTW, the Doctors used to treat polio patients with the horrific iron lung instead of Sister Kenny’s common sense approach that got wonderful results.

No, that is not what Kent, if that was really Kent, said as far as what I saw before the thread disappeared.

And the cover story after the video, of course, is quite different than the claim made in the vdieo. Tch! Tch!

5. From Robert Baty
Here’s a link to the thread that disappeared. I don’t know if anything else was added before it disappeared.

Feel free to clue me in, preferably with links and quotes, as to any other comments Kent has made on the matter. 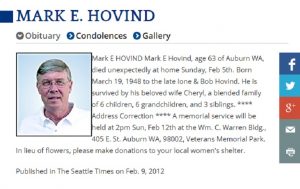