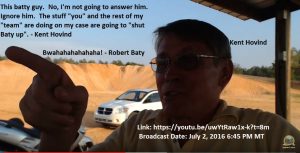 Kent, however, was reported as mentioning me and that in a less than favorable light.  So, I contacted the paper and it was agreed that I would be allowed to submit a rebuttal for publication.  Others were invited by the paper to join in the response to the Hovind article.

The Monroe Journal today published that front page response to last week’s Kent Hovind article.  It is very hard to read if one does not have a subscription and I have not otherwise been provided a clear copy.  The editor indicated he would send me a clear copy after publication. 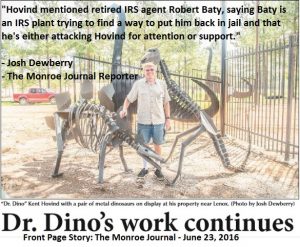 From this week’s front page story: 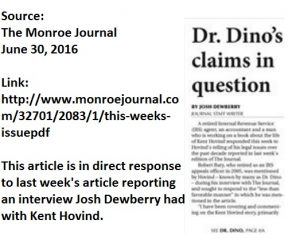 Hopefully, someone will eventually transcribe the text, and we will be hearing more about these things.

My challenge to Kent remains outstanding with 61 current propositions to choose from regarding the proposed discussion between Kent and me.

Following is what I sent to The Monroe Journal and that from which they created their article.  If you have a clear copy of the article you will notice some differences in what I actually wrote and what they posted.  That’s to be expected in the newspaper business.  It’s just something to be aware of.  If there are questions about what I had to say, please refer to what I actually wrote and not what was reported; unless they happen to be the same.

Kent Hovind – Another Side to the Story!
June 25, 2016
by Robert Baty (IRS Appeals Officer, retired)

A few days ago I viewed one of Kent Hovind’s many YouTube broadcasts and noticed that he was boasting about having made the front page of The Monroe Journal; an article by Josh Dewberry. Not long after someone informed me that I had been mentioned in the article, in a less than favorable manner.

The Monroe Journal has offered me an opportunity to respond and to add my further comments regarding other substantive matters that were mentioned in the article or are related thereto.

I have been covering and commenting on the Kent Hovind story, primarily from a legal perspective, for a number of years. Along the way I was able to get Peter J. Reilly, CPA and Forbes.com contributor to cover the story and he has, perhaps, posted 100 or so articles on the Hovind cases on the Forbes.com website as well as his personal blog.

In his article, Josh Dewberry wrote, “Hovind mentioned retired IRS agent Robert Baty, saying Baty is an IRS plant trying to find a way to put him back in jail and that he’s either attacking Hovind for attention or support.”

Some of Kent’s and his peoples’ common “cause stalking” tactics are “identify, villify, destroy”, and so when it comes to critics like me Kent and his people are most often seen evading an open, honest discussion of Kent’s legal problems which he and they commonly lie about.

For instance, the article states Kent’s common lie about what is required in order to commit the crime of “structuring”, stating, “Structuring is when two transactions of less than $10,000 each but totaling more than $10,000 are made in the same day”.

That’s just flat out wrong, and coming from Kent and his people, at this late date, it is appropriate to characterize it as a lie.

“a person structures a transaction if that person, acting alone, or in conjunction with, or on behalf of, other persons, conducts or attempts to conduct one or more transactions in currency, in any amount, at one or more financial institutions, on one or more days, in any manner, for the purpose of evading the reporting requirements…

The transaction or transactions need not exceed the $10,000 reporting threshold at any single financial institution on any single day in order to constitute structuring within the meaning of this definition.”

If you can’t figure out how that simple definition refutes the lie being promoted by Kent Hovind and his people, try reading it again and Kent’s definition. Kent’s singular cash withdrawals, which Kent admits were intended to keep the bank from having to file cash transaction reports, constituted the crime of “structuring”, by definition (legally, not Kent’s contrivance).

In order to save on space, I will mention of few other important matters that Kent has used to promote his false legal narrative and that were mentioned in the article.

Kent “decided to stop the cash transactions because he was feeling uncomfortable”. The trial transcript, available on-line, indicates it was the bank that expressed concern about Jo Hovind’s safety in carrying around the cash that led to the change.

“A S.W.A.T. team showed up and arrested Hovind and his wife.” I don’t think so. This has been a cornerstone in Kent’s narrative and he and his people have often illustrated it with pictures of S.W.A.T. teams and yet no evidence, to my knowledge, has every been posted documenting the use of a S.W.A.T. team. Recently, one of Kent’s people responded with a Hillary Clinton cover line, “what difference does it make”. It makes a lot of difference when it comes to realizing the false and/or misleading claims that have been used to promote Kent Hovind and his campaign against the feds for daring to call him to account for just a few of his crimes.

“The judge said my (Kent’s) crime was worse that rape”. There is no credible evidence to support that claim, but there is a yet untold story as to how Kent and his people developed the scheme to exploit the mention of “rape” which appears to be traceable not to Judge Rodgers but to Kent’s boy Eric. The scheme apparently was being managed, at the time, by another felonious tax cheat who is now in prison.

Regarding John David “Roy” Atchison, deceased: Kent and his people have made a big deal out this, but have never, to my knowledge, documented to what extent, if any, he had anything to do with Kent’s case. Kent and his people have, as with Atchison, and as noted above, tried to “identify, villify, and destroy” all those involved in Kent’s prosecution and his critics. They have gone after the investigators, prosecutors, judge, and even me; anything to keep from dealing with Kent’s legal problems, his guilt, and his responsibility for having sent his wife to prison.

Yes, Kent sent his wife to prison as assuredly as King David sent Uriah to his death. In recent news, it was announced that Jo, his wife, was finally divorced, at her request, from Kent. Kent could have kept her out of prison, and would not.

Kent claims that his lawyers (hand picked to promote Kent’s views and with questionable credentials and repeatedly disciplined by the courts and/or legal bar) told him not to put on a defense because the Government failed to establish that a crime was committed; in the context of Kent promoting his false legal narrative regarding structuring. There is reason, it seems to me, good reason, to believe that is not the reason why no defense was put on. Kent was guilty, the evidence was clearly overwhelming, Kent and Jo would have had to testify to put on any kind of legitimate defense and they would have been “destroyed” on cross-examination, and, just maybe, Kent didn’t want to pay for a defense that was sure to fail.

Kent has set up at least two nominee corporations he uses for operations in order to keep the feds from being able to latch on to property to satisfy his outstanding debts. Not mentioned in the article, that I noticed, was Kent’s U.S. Tax Court case, which he initiated in an effort to challenge his personal income tax liabilities as determined by the I.R.S. The ultimate result in that case, after appeal, was that Kent was liable for personal income tax amounts, independent of his criminal case, in the millions of dollars, including the monetary FRAUD penalty.

Remember the structuring issue mentioned above. The trial transcript indicates Kent was funneling millions of dollars through his bank account(s) and hadn’t ever filed a personal income tax return. Kent was not operating as a church or other tax-exempt organization (Kent claiming otherwise does not make it so, as a matter of law). It was just “Kent Hovind, Proprietor” for tax purposes. Kent’s sovereign citizen theology led him to believe he was not a person subject to the laws of the land unless he “consented” to be so bound.

Kent and I had a brief, direct and personal email exchange via Kent’s CorrLinks account in 2013; initiated by Kent and his people. We discussed some of these things and when push came to shove Kent refused to honestly and openly address the issues and cut off the communications. That history is available on-line in various places, including: http://kehvrlb.com/hovind-v-baty-the-corrlinks-exchange

Much more might be said. It’s a long and sordid history. I recommend those interested in such things who are not well-informed to spend some time researching the details. The popular, public discussion regarding Kent Hovind will, no doubt, continue inasmuch as Kent, as noted in the article, has pledged the rest of his life to promoting his false legal narrative.

Clear copies of the 3 Monroe Journal Hovind-Baty stories can be found at the following links:

In his performance on the evening of July 2, 2016 Kent Hovind commented on “our” published response to his previous published interview.  It starts around the 7:45 mark as indicated in the following link: