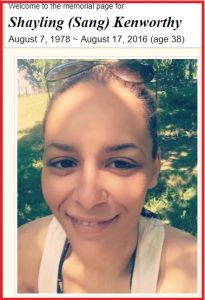 A memorial visitation will be held in the Condon Funeral Home 684 Kearny Ave., Kearny on Monday from 4-8pm.

Shay had worked in human resources for many years in the NJ/NY area until recently forming her own HR company.  She had attended NYU.

Surviving are her husband, Lee Kenworthy and her children, Siabella and Mikailin.  Shay was the daughter of Jose and Nelly Sang who survive her.  She was the sister of John and Jamie Sang.  Also surviving are her parents in law, Sharon and Barry Dwyer and her sisters in law, Casey Kenworthy, Jennifer and Caitlin Dwyer.  Shayling was predeceased by two children, Paul and Ariella.

Shayling Sang Kenworthy died at a young age in 2016, as a result of natural causes, though the circumstances surrounding her death were a bit unusual.  Since that time, her husband, Lee Kenworthy has been promoting the conspiracy theory that she was murdered.

Shayling’s family has objected to Sharon’s/Shara’s public false and misleading claims regarding the case.

Lee Kenworthy has recently filed a federal wrongful death suit in promotion of his murder/conspiracy theory and in an effort to reap millions in damages.  Several motions to dismiss are pending in that case; which case appears to be clearly frivolous on the merits.

Shara/Sharon and Lee have been UNresponsive to the family’s requests that they cease and desist from promoting their frivolous murder/conspiracy theory.

All would explain what is the public interest in Lee Kenworthy Story.

Please, you could let public know that we are getting answers today regarding this matter.”

If anyone has or wants information regarding the public interest of Lee Kenworthy story and reporter Shara Michelle Wolfe “ Feeedom Public press “.

No need to hackle online with reporter just call number above and ask, what is problem.

Regarding any concerns with rights of Lee Kenworthy and why for a CPS case they used SWAT Team and snipers, if they did.

Any inquires and press release are available as OPRA.

Also concerns regarding all CPS issues and having a agent laughing at a children while they where crying as said and documented by Shara Michelle Wolfe aka Freedom Public Press.

All inquires call office of advocate all this must be reported, if public interest 877-543-7864.

This is a tragedy and society and world needs to know ….. wait for the surprise society.

This information should have been provided by the photo journalist Shara Michelle Wolfe .
Let’s see the truth!

References – Links to Related Articles on This Site 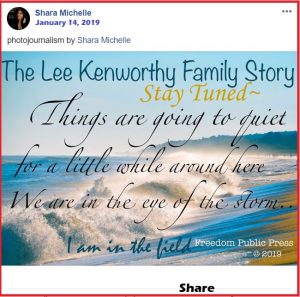