Kent Hovind‘s cult compound is in district 3 of Conecuh County.  The county commissioner for district 3 is Johnny Andrews who has been featured in one of Kent’s performances; which performance stirred quite a bit of activity in Conecuh County as was stimulated by the activities of Deborah Henderson who prompted Kent Hovind to broadcast a public response to an editorial critical of his operations that was published by Jim Allen of The Monthly View.

The image below is NOT of Johnny Andrews 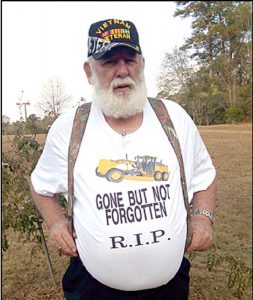 That picture is reported by Jim Allen at:

The caption reads, in part:

The shirt, and Windham’s appearance before the Commission, brought some heated words between Andrews and Windham, but only for a short time. Commission Chairman Leonard Millender did a good job of playing referee.

James Windham reports on happenings in Conecuh County at:

James has not yet posted his report on the latest commissioners’ meeting, but the following are some of his comments from the last meeting:

Even after almost 36 hours to recover from the stupidity that manifest itself at yesterday’s commission meeting I’m still reeling over the total asininity of Andrews and his actions.
During the course of the meeting Andrews actually called me a “Bastard” and said it loud enough I have it on my recorder.  That’s pretty ballsy for anyone but most especially him after the history we’ve had together.
It is difficult for me to watch a “grown man” cry but that’s the position Andrews allowed himself to sink into, whinnying like a baby he barely kept from choking back tears.
Next out of the box in a continuing set back to Andrews was the movement to put each motor grader in the county working an equal number of miles of dirt road, a practice that had been in place prior to the Andrews crew destroying it in 2013 along with approving him getting a second, not needed motor grader for his district.
Conecuh has 400 miles of dirt road with it broken down as Districts 1 and 3 having 121 miles each, District 2 having 84 miles and Districts 4 and 5 having only 30 some odd miles….  A motion was made that the districts go back to doing that 80 mile stint so each motor grader would be operating with basically the same number of miles and hours on them.
In 2013 Andrews, in what I believe to be a more racist decision than anything else, demanded that District 5’s motor grader stay out of his district.  In conjunction with that he used his influence over his “followers” elected with him to vote in favor of getting a second motor grader for District 3.
Let’s try to look at this from a practical side.  Andrews cost the county almost ¼ million dollars in new grader cost yet there were no additional workers hired to operate this piece of unnecessary equipment, in fact it spent more time sitting in his foreman’s yard in Lenox than doing anything else.  He just needed it to be on a power trip and a lack of intestinal fortitude on behalf of those that had been elected with him allowed him this feeling of superiority.
Andrews could see the handwriting on the wall and his cries became louder as he offered one ignorant excuse after another as to why that system could not work.  Amazing, it had worked well before he became involved in destroying it just to establish his own little fiefdom.
Knowing it was coming, Andrews saw his motor grader being taken away.  His actions were more those of a spoiled rotten child than a grown person and an “elected” representative of a county.  District 3, your votes are truly reflected in what you sent to the commission chambers.  As I said in my commission report you had the opportunity to send a decent man to the office and you failed your district and the rest of the county horribly.
It just doesn’t stop with Andrews’ cursing me, Commissioner David Campbell was also on the receiving end of Andrew’s tirade.  If I can believe what I was told, and I have no reason to doubt it, Andrews informed Campbell he had just committed political suicide, he had F_’ed up, he had signed his own death warrant and other things, none of them complimentary.
I do believe Andrews is in for a rude awakening.  His bullying antics, curses and other childish actions are about to become a thing of the past or he’ll get nothing done over the next four years.  Just so he’ll know, I will be watching and I’m not afraid of him and his perceived omnipotence.  I do believe the days of unlimited culverts, additional paving and unneeded equipment for District 3 is coming to a halt.  We’ll wait and see.

As for Johnny Andrews, here is what he looked like during his appearance in Kent Hovind’s video: 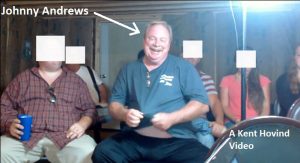 Some may recall that the entrance to Kent Hovind’s compound is a quarter mile or so off a paved road.  Kent is going to be expecting Andrews to keep that dirt road (Pearl Lane) in good shape whether he’s got two or just one grader.  Kent has also indicated he expects that road to his entrance to eventually be paved; even if he has to pay for it himself. Oh yeah, Andrews house has an entrance on that paved road right by where it intersects with Pearl Lane.  Andrews and Hovind are, in effect, neighbors, and Andrews has been known to brag a bit about finding the property for Hovind and bringing him in to the county.
UPDATE November 29, 2016 – James Windham’s Report
http://www.conecuhcountynewsandviews.com/Commission-Mtg–28-Nov-2016.html