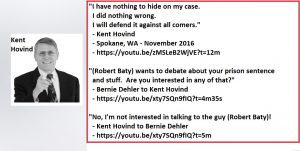 The following is a transcription of the words of Kent Hovind as uttered before a large convention center crowd in Spokane, WA a few days ago.  There is good reason to believe that Kent knows his words contain flat out lies regarding his case.

Also, you will note his claim in closing that segment of his performance which also contradicts the truth; which is he will not defend his claims against me.

My challenge to Kent Hovind regarding these matters remains outstanding and unanswered.

I got several questions during the break.

I get this all the time.

It’s the most bizarre thing.

The IRS came and raided our ministry with a S.W.A.T. Team, and they said get every DVD #5 you can find.

My seminar series #5, its in the package back there; I cover the dangers of evolution.  This theory is not only stupid, it’s dangerous.

It’s the foundation for communism, socialism, naziism, marxism.  They don’t want you to know there’s an underlying philosophy behind all of those systems of government.

If there’s a God, then he tells us what’s right and wrong.

If there’s no God, then the Government tells us what’s right and wrong.

So, they arrested me and charged me with “structuring”.

I said I’ve never heard of that, what is it.

What had happened, we were building our ministry in Pensacola, and we had a lot of college students who would come when they had  a couple of hours free and say I’ve got a couple of hours can I help.  We’d say, yeah, here, take the pickup truck and $2,000 and go buy shingles or go buy plywood or whatever, you know.

So, we had 30 or 40 different college students come to help us; just occasionally as they had time.

So, we were dealing in cash for about 2 and a half years.

The pastor said, try to keep your withdrawals under $10,000.00 or they are going to think you are a drug dealer.

OK, fill out your form; I don’t care.

So, Congress passed another law that said you are evading the reporting requirement by structuring your transaction; by doing 2 in 1 day, that are under 10, but the total is over 10.

OK, I never did that either.

The law says 2 withdrawals in 1 day.  We never did that.

Just, as we needed it, we got the money out for the building projects we were doing.

Anyway, they came and arrested me for, they said you were structuring.

We stopped doing that in ’02, and started using credit cards.

I said, you’ve got to be kidding.

They took me to trial.

He gets up and says, now folks the law says if you find Kent took out more than $10,000.00 in one day in 2 or more transactions then you must find him guilty.

The U.S. Attorney said, I object.

Object to what?  He’s reading the law.  This is what the law says.

So, they held a recess.  The judge went back and changed the jury instructions, and said, if you find he took out less than $10,000.00 you must find him guilty.

I was special.  They changed my jury instructions; not allowed to do that, but they did.

The maximum sentence for that crime is 0 to 6 months; if it’s your first offense.

I had a clean record; I didn’t know where the courthouse was until that happened, OK.

I never been to court for any of that.

So, the judge said at sentencing, “Mr. Hovind, this crime is worse than rape; I’m enhancing this to 10 years”.

They hauled me straight off to jail.  Almost 9 years later I got out after they moved me 32 times all over the country to keep me quiet.

Then they said, not only do you go to prison, all that money that you structured, you owe that to the Government.

What? We took church money out of church account to put a roof on church property and to put the black top and to do all…; it’s all right there.

So, the U.S. Attorney went down and seized the church bank account while I was in jail.

A couple of weeks later he flew to Detroit to have sex with a 5 year old, got off the airplane with Vaseline and doll.  They arrested him and he hung himself in jail.

That’s the U.S. Attorney that put me in jail for structuring.

SO I HAVE NOTHING TO HIDE ON MY CASE.

I DID NOTHING WRONG.

AND I’LL DEFEND IT AGAINST ALL COMERS.

One other charge they gave me was threatening an IRS agent.

When they came and raided the place; the next day I am doing my radio program and I said, Lord, I am your child, this is your place, I want you to protect it, you do whatever you have to do to protect us from these people.

They said my prayer on the radio was a threat.

Anyway, I’ve been out 15 months having a blast….

Link to the page on this site that contains the 64 propositions in my challenge to Kent Hovind:

Link to video of Kent Hovind’s appearance in Spokane, WA as reported above: