One of the things C. Clarke Holm and Danielle Holm and the Holm family have not cared to talk about is Mr. Holm’s older son who he fathered about a dozen years ago with another woman not his wife.

Mr. Holm appears to have voluntarily given up custody of that child to one of his family members and that child may have ultimately been adopted by yet another relative.

Today Danielle Holm has provided some cryptic comments about that other child. Her comments leave a lot to be desired as to what the story is about that child, a possible special needs child, and why Mr. Holm has never publicly been noticed doing anything to try and have custody of that child returned to him.

Maybe we will hear more that.

…he isn’t a father to his other son.

Do you know more about our lives than we do?

How do you assume who is in our lives and who is not and what Christian does and what he does not?

And yes you are distracting from the original sin here.

So in your mind, you believe Christian is a bad father which there is no proof of.

So that justifies OUR first child together being ripped off me illegally?

We very much prayed for this child and I was told I couldn’t have children which was devastating to both of us. But then a miracle occurred.

How do you know what either of us do in life?

How then do I care and love Christians son like my own son if he was not involved in our lives?

Why does his son absolutely love his daddy so unbelievably much and call him his “awesome and cool dad” and just recently called him his “hero” to me and also ask if I could “be his mom”.

We are trapped in a town called Heflin because of an illegal kidnapping of our first child together and we are keeping his son far away from here so he isn’t trapped as well.

We are not. If we could have our family restored the way God intended, then maybe we could finally have all of us together once we know our children are safe. 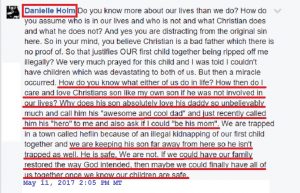