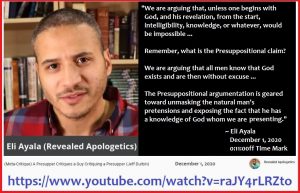 The following are from the comments section below the video.

(Pine Creek had engaged Gavin via chat during the live. – RLBaty)

I don’t know why Gavin Hill was so elusive in the chat while the video was playing.

Seems to me that he actually agrees with me, based on our prior discussion which, in relevant part, I have archived at:

That agreement is to the proposition that Presuppositionalism, despite Sye Ten Bruggencate’s presentations to the contrary, provides NO, NO, NO “proof that God exists”.

Sye is the one that drew me into the study of Presuppositionalism and his claim that he had “proof that God exists” is what irked me.

Sye’s website, despite Gavin’s admissions and Sye’s fine print disclaimer if you can find it, is still:

The substance of my work with the misguided Presuppers has pretty much centered on trying to get them to admit that their Presuppositionalism offers NO, NO, NO “proof that God exists”.

I don’t know if Sye has been sufficiently explicit in that admission.

Gavin has been, even if not in tonight’s chat while the program was live.

My additional article dealing with my efforts to get Eli to personally engage me, one-on-one, and deal with the simple, substantive objections I have with Presuppositionalism, is archived at:

Otherwise, I have often noted that:

If you grant Presuppers their Presupposition, then they win.

If you don’t, they lose.

I wander why you still blow on the same horn, so to speak, after our discussion 4 months ago?

Where I pointed out to you that on Sye’s website it clearly states:

(in the about section) meaning that, there is no disagreement in the first place.

I already made clear to you, that you appear to have misunderstood the intention of the website

Equally you seem to misunderstand what presuppositionalism is if you believe it ‘offers’ or attempts to provide “proof that God exists”.

What the biblical apologetic (defense) does, is expose that you in-fact already know God exists and do not require convincing or extra proof.

Your typical default defense of the failed Presuppositionalism is again noted.

That is, your default, as mentioned also by Eli in his video, “everyone knows God any way and doesn’t need proof”, is just another point of contention; one of your presuppositions that is not accepted, but well enough understood to be your “go-to” presupposition when your “proof” fails.

How many times have we heard Sye and others resort to it after their first line offensive fails (i.e., “Y’all don’t need any proof any way. Everyone already knows God exists.”).

I mentioned Sye’s fine print disclaimer in my post above.

It’s a rather lame attempt to cover his deception, and really doesn’t work, in my opinion; especially considering his whole approach and continued naming of his website

I have opined that Sye may have actually added his disclaimer after I made such a fuss of his failed “proof”.

But it goes beyond that, as I emphasize in my approach.

Presuppers are everywhere making such claims as:

“If God did not exist, you could not have toothpaste!”

“If God did not exist, you could not know anything!”

All of which imply they’ve got the “proof that God exists”.

You’ve got your work cut out for you, in my opinion, Gavin, if you want to help me get the word out that Presuppositionalism is just a conversational gimmick and offers NO, NO, NO “proof that God exists”.

For now, I will accept your agreement with me as to Presuppositionalism offering NO, NO, NO “proof that God exists”.

Thanks for your support.

Eli Ayala seems to, as in this video, complain about Presuppers who understand it less than I do and do it a disservice with their antics.

Yet, Eli has entertained Sye Ten Bruggencate without prevailing upon him to change his ways.

Sye’s Claim: “The proof that God exists is that without him you couldn’t prove anything.”

Buried in Sye’s “fine print”: “This website is in no way trying to prove that God exists.”

If you don’t grant presuppers their presupposition, I’m not sure how “granting” anything would be possible…

Not sure what point you are trying to make.

If what is presupposed is what is in dispute, then granting the presupposition is to concede the dispute to your adversary.

Folks usually don’t argue about what is agreed, stipulated.

They argue about what is in dispute.

Presuppositionalists, in my experience, when properly understood, try to get their adversaries to accept their disputed presuppositions.

If God did not exist, you could not prove anything.

If God did not exist, you could not have peanut brittle.

If God did not exist, you could not know anything.

If God did not exist, you could not …

Presuppers believe those claims, and when pressed, admit they cannot establish them beyond presupposing their truth.

That’s why I say:

Grant Presuppers their presuppositions and they win.

Deny them, and they lose.

I thought I had already given enough examples of that point illustrating the failure of Presuppositionalism.

If God did not exist,

then you could not have logic, or whatever.

Grant them that presupposition and they win.

I have archived this latest engagement at:

See you there, or not.

I’ve spent a lot of time around Eli’s place, but neither he nor his have requited my love by coming around my place.

Oh, yeah, there is also:

Not sure what you are attempting to achieve, but it seems as though you will continue blowing the same horn as if it is a banner of victory.

When there was no disagreement to begin with.

Truly you are the victor of battles not fought.

Your evasions are again noted. I was again victorious over the failed ideas of what is commonly called Presuppositionalism.

If you failed to see any battles, that likely is because you and other adversaries have fled the field and dare not openly and honestly engage the matters disputed.

Tell Sye hello for me, and do please send me a note when he cleans up his website to more appropriately reflect whatever it is he is trying to do with it.

Robert, I have a question for you.

Would you reject the only Son of God?

Your off-topic “go to hell” suggestion is also noted.

Maybe we can talk of such things after Eli and Sye face me and we resolve some of their problems with Presuppositionalism.

That reply would be a non sequitur.

My question, again, would you reject the only Son of God?

Nope, I wouldn’t be evasive in not answering your “go to hell” question.

You, Eli, and Sye have a lot of catching up to do before you have any kind of platform upon which to try and stand and propose such silliness.

Rather than talking about people who are not here to represent themselves, let us have a reasonable discussion.

Withouht vague accusations, speculation and suspicions. If you dont like my first question, answer this one instead:

Do you say there is no God?

Do I say there is no God?

Do you say that Sye is guilty of false advertising as to his website?

So my next question is:

Do you believe that you are a good person?

I didn’t think you were acting in good faith, and you have offered evidence confirming my presupposition.

Thanks for the added demonstration. Catch up, or not.

I understand, however I am acting in good faith.

Do you believe that you are a good person?

We have different interests and so carrying on further is not indicated.

Thanks again for the foregoing demonstration.

I think I’ve got enough as far as this latest excursion into the weird, wild world of Eli Ayala, Sye Ten Bruggencate and their Presuppositionalism.