There seems to be a lot more to this story that will likely ever be kept secret, but I will report here some of what has been reported in order to get the history into the coverage and leave it open for additional development.

My principal interest involves how it was that Kent came to associate with and hire Maurice (Maury) Adkins, a career criminal like himself who went on to spend about as much time in prison as Kent and now presents himself as reformed and a practicing Jew.

“MAURY ADKINS has recently joined our staff. He is leading our legal battle with the county inspectors over the building permit issue, providing assistance to Christians who have been discriminated against in the school or work place, and fund raising for our ministry.”

Trudy Owen’s version in response to Kent Hovind’s version is as follows:

Article entitled: “Was it Assault and Battery”

To all of you who have been following the Assault Charges that were brought against Kent Hovind later last year, I (Trudy) am posting a public response to his formal complaint filed with [State Attorney] Mr. Golden.

I did indeed move into the house at 100 Cummings road in June and was under the impression that Hovind was buying the house from Mr. Weaver (J.R., as I knew him) and due to close any day. In July I was told by Maury that Hovind and J.R. had closed the deal and Hovind was now the landlord. Hovind states he rented the house to Maury (an elder in CSE) but I was told he was renting to both of us as Maury was due to move in during August. Rent receipts were made out to me.

Yes, Hovind did drive to Tenn. to move my son and his family to Pensacola. Maury and I were suppose to go get them. The day we were suppose to leave Hovind had a court case on the county issue and when he and Maury returned I was told by Maury that Hovind was going to TN because his attorney advised him to get out of town for the night. (this was not true…one of their many lies…I will later explain.) And yes, my son and his wife were told they could move into Maury’s former residence and were unable to because once they moved to Pensacola.

Maury made every excuse why they couldn’t. (More lies.) As far as Hovind saying he told my son and his wife they could visit a few days…he never told me or them that! He may have told Maury but, it was because of Maury and the lies he told that resulted in my son and his family having to stay at the house with us. Maury made a bunch of empty promises to them before coming down including a place to live until they got settled.

–
The domestic dispute Hovind refers to…well, that’s the day all the lies finally made sense. I finally discovered what was being hid. I found out that Maury was a career criminal (as his parole officer refers to him.) Almost everything Maury had told me about himself was a lie. He’s a professional con and has a rap sheet going all the way back to 1977. When I found out the man was on parole I immediately called his parole officer to find out why. Get this….I didn’t know about her (parole officer) and she didn’t know about me! Maury had even conned her!!

See the picture…that’s why he could not go to Tennessee (on parole and could not leave state without permission) and that’s why my son and his wife could not move into Maury’s supposed former residence. Hovind stated himself Maury still had belongings there and of course he did because his parole officer had no knowledge he wasn’t still living there and she paid him regular visits! His parole officer was quite surprised to find out the information I had supplied her about the residence issue and other issues. I was quite surprised to find out information his parole officer supplied me.

Hovind and Maury were furious I called his parole officer and both tried to silence me as I started to put pieces of a puzzle together. Hovind even told me “Do not talk to anybody, not even my wife.” I refused to be silenced. And yes, I was angry that my family was used and manipulated and lied too by two con men!

Hovind claims my son and I never sought work while he knew us. He knew us for 3 months. I have my own source of income and have been self-reliant for many years and did not and do not need Maury‘s income to survive. My son had a job in TN that he gave up because Maury promised him a better job in Pensacola with a friend. I have letters to prove it.

–
I personally witnessed Maury loading files and belongings from his trailer on the morning of the 15th and then he left town. And, as far as I and his parole officer know hasn’t returned as of yet. He’s currently on fugitive status. (This can be verified at http://www.dc.state.fl.us/Absconder/search.asp type in Maurice Adkins)

Did I call the IRS?

Maury may have told Hovind such but it’s a LIE. In fact, after I moved the IRS tracked me and paid me a phone call.

I have to laugh when I read Hovind’s holier-than-thou attitude and his supposed genuine concern for me and my children by going to their school principal and asking for prayer. What a joke! I suppose he had the same concern when he called my child a “demon-child!”

On the afternoon of the 15th I received a phone call from Maury stating that if I didn’t shut up I would be hurt.

I stated, “are you threatening me?”

I said, “so you are threatening me.”

My family and I were further enlightened at the parole officer’s office and after the visit felt it in our families best interest for safety reasons to vacate the area as soon as possible. We returned to the home and began to pack.

Later Hovind did show up at our door.

–
At this time I was more concerned about Maury and still had doubt in me that Hovind could be physically harming so I answered the door.
–
Hovind did offer me money and asked me to sign a statement. I refused stating “I did not want any of their money and I did not trust either of them.”
–
Hovind stated he was my friend.
I said, “no you are not” and proceeded to close the door.
–
It was at this time Hovind became aggressive and violent. At no time prior to Hovind lunging through my door was any part of his body in my house.
–
His claim that I was slamming the door on his foot and face is a LIE!
–
My son and daughter-in-law were there and witnessed the whole encounter.
–
The police asked us each to account for what happened and our stories matched. The police report stated the facts.
–
One thing the police report does not tell is about my daughter-in-law being pregnant and how this affected her and the baby (the baby spent 10 days in ICU after birth) and how my one-year old grandson was witness to Hovind’s attack traumatizing him so severally that for months after anytime someone came to the door he would scream.
–
When Hovind slammed the door open and came flying through it lunging at me my son did what any son would have done if he felt his mother was in danger…he jumped in between Hovind and I and demanded Hovind leave our home.Hovind refused.My son warned him again to leave.Again he refused.

My son then picked him up and removed him to the porch. And yes, he did throw him out the door in the process. Once Hovind was out the door my son closed the door and locked it. I had already been on the phone with the police.

I laugh at Hovind’s once again holier-than-thou attitude about how I was  screaming at him and slamming a door on his foot and face and yet he was talking calmly.

Can you smell the stench from the odor of lying?!

His face was beet red and his eyes were ready to pop out of their sockets as he was screaming at me “Now you wait a minute, I own this house..” (another lie I later found out by the owner himself.)

In fact, I was at the bank closing out my account when one of the girls who work there had gotten wind of the situation and informed me that Hovind did not own the house but her friend’s boyfriend did. She then proceeded to call her friend. A few moments later the owner of the house walked in the bank with an eviction notice. Hovind had called him and asked him to serve an eviction notice on me. After talking with me J.R. stated he could not give me the eviction notice. He said he had wondered if I had realized what I was getting in too. Obviously I had not otherwise, I would have never gotten involved with that mess.

–
Hovind’s claims that we set him up for his money is absolutely absurd!! If I wanted his money we would be in court today as my family suffered emotionally, physically, and financially. We chose to leave the situation and try and put it behind us. I am not a criminal, never have been, do not have a criminal mind and was scared out of my wits by the information I had just learned about a man I thought I knew (Maury) and a ministry I thought was above board.

I find it interesting that I supposedly ripped Maury off and he is pressing charges against me for theft. Hum….a fugitive…a man in and out of prison for many years of his adult life for ripping people off….owing thousands of dollars in restitution….pressing charges against me for theft! Check my criminal history…you won’t find one! The odor gets stronger by the minute!!!! Oh and I might add here…check my son’s criminal history also … you won’t find one!

Now to answer why the case was dropped.

My son and his family relocated to another area so my son could pursue a career with the police department. The state felt it would cost to much to bring him and my daughter-in-law back for trial. Also, my son having a new baby who had a rough start in life and he being in the pursuit of a new career he was not wanting to have to come back.

As for me, when Mr. Golden (state attorney) called asking what I would like to do about the case I stated I would like to put the whole situation behind me. The situation was physically, spiritually, emotionally, and financially draining.

I have been faulted by some for not pursuing justice but my emotional and physical well being was more important to me because of my children. This chapter in our lives needed to be put behind us. Having a muscle disease that can raise havoc sometimes, especially in stressful situations, I did not feel the situation was worth sacrificing my health which in turn would cause more suffering and heartache for my family.

“Vengeance is mine saith the Lord.”

Justice will be served!

An Account of Maury Adkins “Conversion” by Michael Getty 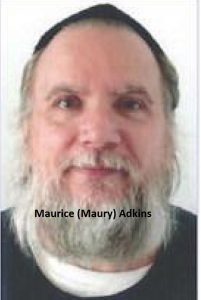 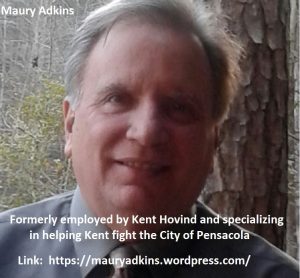