For almost a year Kent Hovind teased his people with a soon to be released “surprise” that would reveal all that was wrong with his 2006 prosecution, reverse his convictions, and get him millions in damages from the federal government.

More recently, Kent Hovind has claimed his surprise will “shut Baty up”.

It now appears Kent Hovind is ready to spring his surprise on his minions who will be asked to send somebody some letters that will, allegedly, result in the overturning of his case, vindication of his innocence, and cause the feds to send him a big check.

I don’t think so.  In his latest broadcast, transcribed in relevant part below, Kent Hovind indicates that in broadcasts later this week he will be revealing more of the still secret details as to what is going on with that.

Still, Kent Hovind has refused to face me or send out his champion to face me and discuss the substantive details of his legal narrative which I claim is false. I currently have 64 propositions outstanding in my challenge to Kent Hovind and dealing with his tax/legal and related matters.

The following image is taken from Kent’s latest performance video and following that is the transcription of what he says about his surprise, starting around the 9:25 mark in the video. 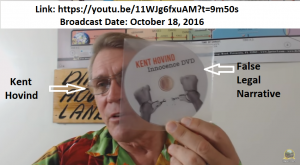 We have another DVD coming out.

There have been some folks working on my case and finding all the errors and one of them is here with us tonight.

Well, 58 charges I was charged with, but 100’s of violations they committed at every level to put me in prison for nearly 9 years, and the DVD series on the innocence not only proving what I did was nothing wrong, at all, innocent, proving what they did, they’re the criminals in this case, and telling you what you can do about it, to get this retribution.

They could pay for the next Dinosaur Adventure Land if this works out!

This will overturn the case, exonerate me, make ’em pay a whole bunch of money; we could buy half of Alabama.

The whole series will be ready to go out Monday, you’re promising, next Monday; and it’s going to be 50 bucks.

Fifty bucks for the whole series of DVD’s, information on all the research, what to do, who to send it to.

Please hang on; watch the broadcasts in the next few days of what you can do about finally getting the case overturned like it ought to be.

This page may be updated as the scheme may be further revealed by Kent Hovind and/or his minions.

There is no reason to think it is anything more than a continuation of Kent’s false legal narrative and another income stream for Kent Hovind and/or his legal dream team leader Brady Byrum.

It appears for now to imply a “sovereign citizen” approach to dealing with the legal issues involved, along with further promoting his false notions about the law(s) which Kent was found guilty of violating.

A lot has been going on since the above was posted.  Kent has worked to delete all of his personal promotions of the Brady Byrum product.  He’s no longer listing it on his website for sale, and he’s deleted his own YouTube videos promoting it.  According to Ernie Land, Kent’s handler, they are working hard to keep Kent out of jail and in that context they have tried to separate that product and its promotion from Kent’s operation; at least directly.

Brady Byrum has teamed up with others to promote the video, including Kent’s man Rudy Davis.  Here is a recent video from Rudy’s channel wherein the “big reveal” is made by Brady for his DVD series and letter writing campaign.