This page may be updated as the story develops!

I became involved in the Baby Holm case after Kent Hovind’s handler Ernie Land announced that Kent’s legal dream team leader, Brady Byrum, was secretly assisting the Baby Holm parents in their sovcit efforts to fight the State of Alabama over custody of Baby Holm.

In the course of covering the Baby Holm case, the group has discussed a variety of similar cases, one of which was the Daria Vredenberg case being championed by Raymond and Amelia Schwab and their followers.
.
As with the Holm case, the Vredenberg case appeared to be another case where State custody of the child was justified.  However, Raymond and Amelia and their people have continued to champion their anti-government, anti-child welfare agency/employee agenda and exploit Daria’s unfortunate circumstances.
.
This page was set up in response to a post by Raymond and Amelia Schwab on their FaceBook page which made false and/or misleading claims regarding me and my coverage of Daria’s case.
.
See: 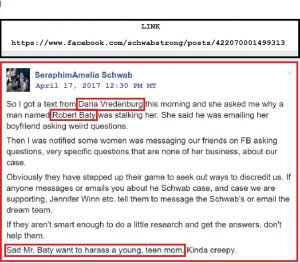 That’s Daria’s picture, with her baby, featured on Raymond and Amelia’s FaceBook page graphic above.

Recently, someone using the FaceBook page of Daria’s current boyfriend, not the father of her child, asked to join my FaceBook group and was added to the membership.  Someone using that FaceBook page also contacted me privately; apparently in an effort to threaten, intimidate and/or bully me into doing their bidding.
.
See:
.

I have no idea who you are or what your goal is but
publicly bashing people about their CPS/DCF case
when you have no idea what they are going through
or maybe the actual truth youre just getting bits and
pieces from social media is absolutely insane you
must be a person with a lot of time on your hands.

Sir I will ask you politely once to take down the picture
you just added.

Ive come to understand that this “group” is a hate
group which I can and most likely will report to facebook
for cyberbullying which is also illegal.

have a great evening

My note to Daria Vredenberg:

Thanks to Raymond and Amelia Schwab, and others, I figure you have a lot of explaining to do, as do they.

Proposition for Discussion
.
On April 17, 2017, Robert Baty scared
Daria Vredenberg, an 18 year old woman.
.
Timbo/Kayla Williams: Affirm
Robert Baty: Deny
.
They just can’t seem to stop talking about me and threatening me.
.
I am longsuffering.
We have a lot to discuss.
Come out, come out, and let the negotiations begin!
. 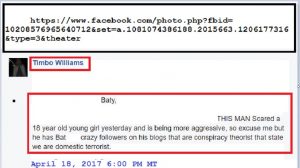 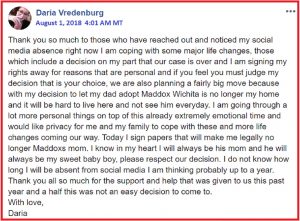 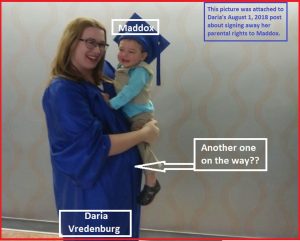 For what’s up with Daria, see: 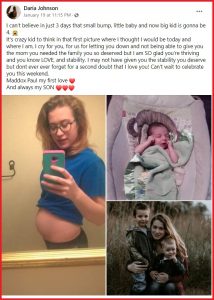