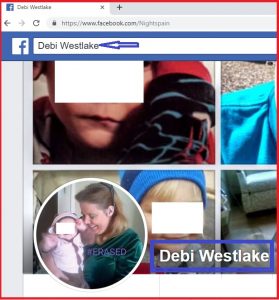 I ran across Debi Westlake while covering the Sammy Dalke story, and Debi didn’t take to my coverage.  Seems she has trouble with the truth as she tries to make herself into an advocate fighting the government and more particularly child welfare agencies and employees.

Debi blocked me on FaceBook some time ago, but today reappeared to take some cheap shots at me and my work, and we had an exchange before she cut and ran again, blocking me.  That exchange took place in a discussion thread on the page at the following link: 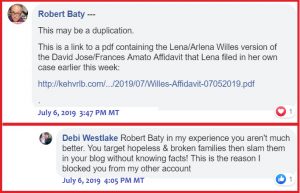 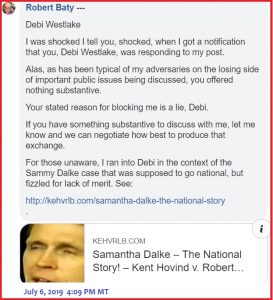 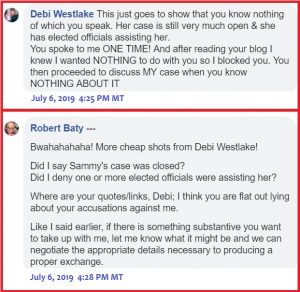 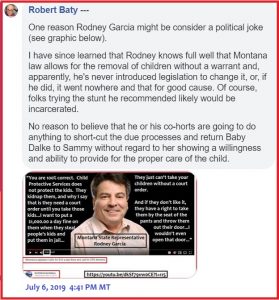 A better image of the Rodney Garcia graphic is: 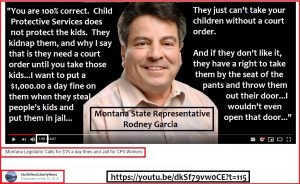 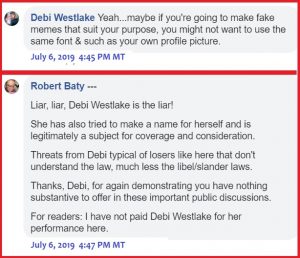 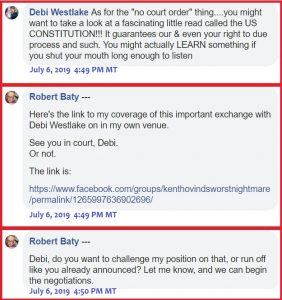 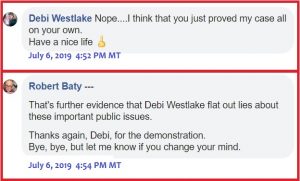 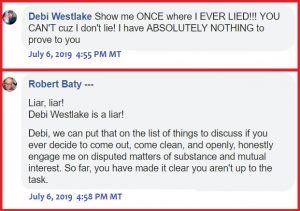 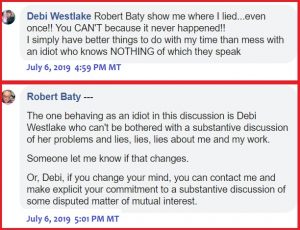 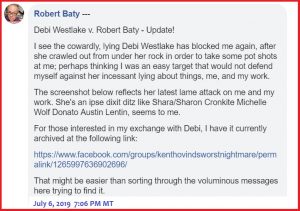 I am over the age of 18 and am a resident of the State of Montana. I have personal knowledge of the facts herein, and, if called as a witness, could testify completely thereto.

I have had two cases with the department of Child and Family Services in the state of Montana. In the first case, beginning in April 2015, I awoke in the hospital to find a piece of paper left by CPS case worker Mark Girdler saying that they had taken custody of my son the previous day and placed him in foster care as I am a single mother, had only been in the state a few months and had no family in the area. There was never an offer of respite care or voluntary placement. During that case, the department introduced us to visitation specialist Andrew Lewis. He was responsible for bringing my son to visits but would often show up at my house, on his days off, for no reason and made numerous sexual advances towards me. I reported his actions to a one of his coworkers, Jane (last name unknown), in late October 2015 and never physically saw him again. In November 2015, the case was dismissed. I learned a few days after the case was dismissed that Mr. Lewis was terminated by the department of Child and Family Services and was facing 4 charges of incest. Mr. Lewis is now currently serving 80 years in Montana State Prison on those charges as well as another 10 for tampering with a witness.

On February 16, 2016 at 9:00 AM, I called the family advocate at the Head Start my son attended because I was extremely sick that morning and had been unable to get him on the school bus. The family advocate, Lizzie Carlson-Thompson came to my house and upon seeing the condition I was in called 911. An ambulance took me to the ER at St. Peter’s Hospital while Ms. Carlson-Thompson took my son to school and made arrangements for him to join the afternoon class that day if necessary. Less than 30 minutes after my arrival at the hospital, CPS workers Grace Zitzer and Rebecca Averill appeared in my ER room and very shortly after stated that they would once again be removing my son. The reason for removal per the paperwork was “inability to parent due to medical reasons; no safety plan and no resources.” I was released from the hospital at approximately 1:30 that day but CPS workers went to my son’s school and took custody of him. I was later informed in court that the removal was approved by supervisor Brent Lashinski, who had to be called at home that day in order to make the decision.

At the show cause hearing on March 9, 2016, District Court Judge Mike Menahan stated “this is one of the more difficult, if not the most difficult case, that I’ve had in terms of the narrow legal issue” and instructed the department to fast track my son home as well as requesting visits more frequently than 2 hours twice weekly. None of which happened.

I had a complete hysterectomy on July 12th, 2016 where it was discovered that I had a severe case of endometriosis and that cleared up the problem. By then CPS specialist Zitzer had been replaced by Bill Zimmerman. Together, we had set up in home visits while I was recovering. Those were also never happened. CASA Leanora Coles had complained that my apartment was unsuitable for a child, saying it had been extremely filthy on a visit she made July 16th, 2016.Mr. Zimmerman came to my apartment at approximately 10:30 AM on the 18th and found NO issues, yet determined it would be best if we had the visit elsewhere to “appease Leanora Coles”. So less than one week after major surgery I was playing in the park with my son. Over the next several months , I fulfilled every condition of my treatment plan (which was not geared towards reason of removal but focused on mental health issues instead) except one. That unfulfilled condition was to establish care with a pain management specialist. I did attempt to do so and was told that they were refusing services because I am not on any narcotic pain killers. I established care with the Center for Mental Health involving counseling sessions, case management and psychiatric services. I completed parenting classes, attended visits (which I walk over 2 miles to get to as I didn’t have a vehicle and the department denied transportation to me) and completed a chemical dependency evaluation (where it was found that I have no substance abuse issues & the department attempted to refuse payment for services) as well as remaining in contact with the department and maintaining a home suitable for a child. I also found someone, vetted by the department, as a safety resource in case of illness again. Yet nothing I did was good enough and they dragged everything out past the 15 of 22 month mandate per federal law then sought termination on the basis that I was unable to change when it was clear I had already done so.

During all the time, the department’s reunification efforts were nil. The order by Judge Menahan to allow more visits and such fell on deaf ears. Our visits never progressed more than 2 hours twice weekly and were often cut short or canceled altogether. The department promptly outsourced our visits to Dan Fox Family Care Program (a private entity that specializes in foster care and adoption) and forgot all about us it seemed. Over the course of the entire period (Feb 2016-Oct 2017 when the termination of rights occurred) I had a total of 3 home visits by CPS; 1 with Grace Zitzer and 2 with Bill Zimmerman and on 2 of those 3 occasions they never entered the house but stayed on the porch. I maintained the same home while the department placed my son in 3 separate foster homes in less than a years time. I established family counseling services for us to attend and they were refused by the department as they had nobody to transport my son to sessions (even though the foster mother at that time worked for the Center for Mental Health). To my knowledge, my son has had no therapy beyond 15 minutes a week with a school counselor. Mr. Zimmerman even testified that it “not my job” to verify that I had complied with the treatment plan. He had all the signed releases he needed yet could not be bothered to simply pick up a phone to check with the Center for Mental Health.

Not one time since CPS removed my son from school (without a warrant or court order) on February 16, 2016 has my son been allowed to step foot back in to our home; not even for a supervised visit. Judge Menahan stated in court, “it’s clear to me that—I think you’re a good parent, and that you obviously love Robert and are doing a tremendous amount for him…. And good for you for having done that. Because you’re certainly looking out for his best interests.” There were never any substance abuse issues, nor were there concerns of child abuse or neglect. The department was simply concerned about a “what if” scenario if I happened to be hospitalized yet refused all requests for assistance and denied payment for services rendered at their request. The department then sought to blame me for their shortcomings thereby resulting in the termination of my parental rights and my deeply cherished little boy being adopted by the final foster family.

I declare that, to the best of my knowledge and belief, the information herein is true, correct, and complete. 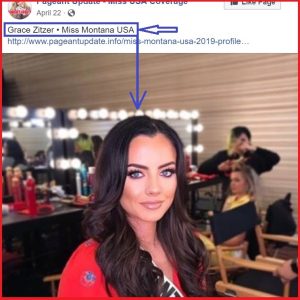 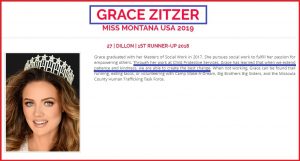 Grace graduated with her Masters of Social Work in 2017. She pursues social work to fulfill her passion for empowering others. Through her work at Child Protective Services, Grace has learned that when we extend patience and kindness, we are able to create the best change. When not working, Grace can be found trail running, eating tacos, or volunteering with Camp Make-A-Dream, Big Brothers Big Sisters, and the Missoula County Human Trafficking Task Force.

Link to article in “The Blaze” regarding CPS, with reference to the Debi Westlake case:

this year by a couple who had no children

Zitzer, who pushed for Robert’s removal in

the first place bragged of the “patience and

kindness” she learned at CFS as part of her

What happened to the Westlake family is

egregious, but far from rare.

Debi provides a little more history as to the predicament she finds herself in.

I was in a pretty bad place after my husband passed away in April of ’09.

Out of pure grief I made some mistakes and bad choices that would effect my life for years to come and at one point I found myself in the garage, door closed & car running.

I still have no idea how I got there but I kinda “came to” & realized I wouldn’t be able to get through that very difficult period & sought help.

In October of 2010, after a moment of weakness, I was “with” someone for the first time after Bob’s death.

See, Bob & I had tried several times to get pregnant with no success but ONE time after he’s gone & bam, there ya go!

I’m one of those women who KNOW they are pregnant almost IMMEDIATELY & I struggled with what to do for several weeks….I mean here I was 39 years old, widowed, lost almost everything I owned, had been struggling for years with a medical issue the doctors just couldn’t figure out & forced to move some place where I knew nobody.

What the hell was I gonna do with a little one.

I remember walking in to that health clinic 6 weeks later for a test thinking it was stupid to add to the stress I was under by having a child. Everything changed in that split second after the nurse handed me the “stick” upside down. I don’t know why I was so shocked when I turned it over, seeing that plus sign but I think my jaw literally hit the floor. The nurse asked “What are you going to do?” I looked at her like she was bat shit crazy, threw the stick in the air, jumped out of my chair & threw my arms around her screaming ecstatically “I’m having a BABY!!” There was NO hesitation, no second thoughts & nothing but pure and utter ELATION!!
.