In the custody case of the child of C. Clarke and Danielle Holm, it was reported that Brady Byrum had been involved in promoting their “sovereign citizen” anti-government agenda which pretty much guaranteed that a resolution of the custody case would not occur any time soon and would justify the State retaining jurisdiction.

The Holm couple and their people have steadfastly refused to discuss Brady Byrum’s involvement in his case and in particular the 25 page letter that the couple reportedly sent to various elected officials (i.e., Jeff Sessions, Richard Shelby, Mike Rogers) and spurious “news” outlets.

In recent days it has been further documented that Mr. & Mrs. Holm may be just flat out lying about what they know about that 25 page letter, the full text of which has yet to be publicly disclosed (see images below).

The Medical Kidnap article below reports that it was Mr. & Mrs. Holm that sent that 25 page letter around to officials at least twice, with a copy also going to Health Impact News, a sister organization to Medical Kidnap.  It was, reportedly, considered threatening among other things and resulted in the loss of the visitation privileges.
. 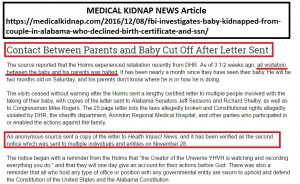 Mr. Holm’s public comment below on March 1, 2017 indicates he is aware of “that event” that resulted in the cessation of visitation as noted in the Medical Kidnap article above. 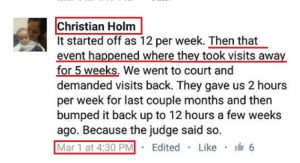 In the public comment below, Ann Live asks Mr. Holm/Danielle about the 25 page letter and why it has not been published in its entirety.

In the public comment below, Mr. Holm/Danielle claim they have never seen that 25 page letter.

In the public comment below, dated March 17, 2017, Mr. Holm/Danielle again allege they have not seen the 25 page letter.

In my opinion, the involvement of Brady Byrum and other “sovereign citizen/patriot” sorts of like mind is one of the best kept secrets of the Holm case.  The truth regarding that needs to be exposed, in my opinion.