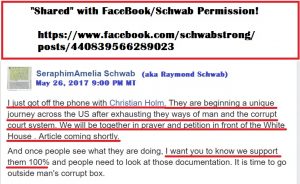 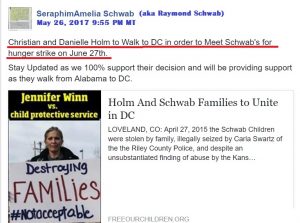 Recently Christian and Danielle contacted the Schwab’s to let them know they feel they have exhausted themselves with the systems of men and will begin a journey, walking across the US to meet the Schwab’s in DC to petition President Trump.

Christian Stated “We were just a couple who were walking across the country, from church to church sharing the gospel and speaking to people about Christ. When we entered Alabama they criminally kidnapped our newborn baby and after exhausting ourselves in legal pleadings, which have been ignored, we have decided to continue our Journey to DC to petition Trump as the Apostle Paul petitioned Caesar. Man’s system is a failure which chooses politically who they will allow to succeed”.

The Holm’s will begin their trek across the country going city to city and church to church to cry out against the injustices of State Sponsored Child Trafficking, Preach the Gospel of Christ and meet the Schwab’s in DC to begin a mutual, indefinite fast asking for an audience with president Trump and criminal investigations into State Sponsored Child Trafficking in Alabama, Kansas, and many other States.

The Holm’s and Schwab’s Realize that the Judiciary, Law Enforcement, and State Government officials will continue to abuse their power, deny parents due process and civil liberties while they kidnap children to pad their budgets with Federal Incentives under Hillary Clinton’s Adoption’s and Safe Families Act of 1997, and Title IV of the Social Security Act.

Christian and Danielle will begin their journey by foot in an undisclosed location, for security reasons on Friday May 26, 2017

to eventually land in Washington DC to unite with the Schwab’s for an indefinite Fast/Hunger Strike until President Trump stands by his pledge to not ignore the average citizen and agrees to meet with them to review his evidence as many families seek a justice department investigation into State Sponsored Child Trafficking under the guise of Child Protection.

The Schwab-Holm Relationship May Be Changing!