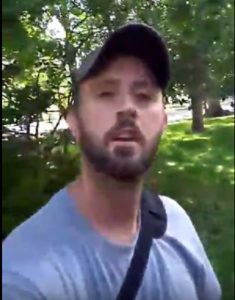 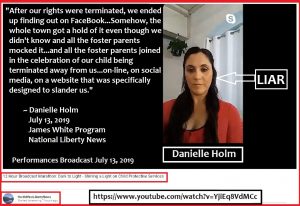 C. Clarke and Danielle Holm have had almost 3 years to promote their False Holm Narrative and have not let up in doing so; maintaining FaceBook pages and websites and YouTube channels dedicated to that cause, directly or via surrogates.  I (Robert Baty) have tried to provide the other side, the truth, regarding their story and this website has many articles reflecting that effort.  I also have a FaceBook page dedicated to that cause.

In summary, C. Clarke & Danielle Holm had thought to have an unassisted birth of their first child together in a wilderness area.  It didn’t work out, they wound up at a hospital, and the State of Alabama removed the newborn from their custody, eventually terminated their parental rights and the child was adopted into a permanent home.

In days gone by, we were able to glimpse the early life of Danielle Holm through her mother and sister who testified about that and revealed that Danielle Holm was not particularly honest in her account of her early life.

We lacked much information on C. Clarke Holm because his family was apparently dedicated to keeping their mouths shut.

However, Angela Cross has come forward and offered her testimony regarding her experience with C. Clarke Holm and his family.  Angela is the biological mother of C. Clarke Holm’s teen-age son.  This article is based on the testimony offered by Angela Cross.

C. Clarke Holm’s mother lived with C. Clarke Holm as long as she could, but was subjected to mental and emotional abuse and financial ruin.  She eventually left “with nothing”.

C. Clarke Holm was an aggressive child, young adult.  He was not “beaten” or other abused by his father and/or grandfather.

Angela and C. Clarke had a relationship for 15 years or so; late teenage years, 20’s and maybe into their early 30’s.

Sea Island Bank may have managed the trusts or be managing what is left of them.

Angela, at that time, was trying to “get clean” while C. Clarke Holm was continuing to use just about whatever he could buy.

Angela became pregnant again.  C. Clarke Holm’s father, Charlie, tried to pressure Angela’s mother into forcing Angela into another abortion, but it wasn’t going to work this time.  She ran Charlie off.

That child was born, named Ashton, and Angela, C. Clarke Holm and Ashton moved into an apartment.

For reasons unknown to Angela, one night the apartment was visited by law enforcement (i.e., raided), looking for C. Clarke Holm.  He wasn’t there.  Angela did advise that there were weapons on the premises and law enforcement removed the weapons.

C. Clarke Holm had a number of incidents, involvements with law enforcement, and his father was regularly involved in trying to keep things under control and clean up C. Clark Holm’s messes.

When C. Clarke Holm showed back up, he told Angela they were moving back to the house he owned.

C. Clarke Holm worked for a short time selling cars.  Other than that, Angela was the one regularly employed.

C. Clarke Holm’s mother lived with C. Clarke Holm as long as she could, but was subjected to mental and emotional abuse and financial ruin.  She eventually left “with nothing”.

C. Clarke Holm was an aggressive child, young adult.  He was not “beaten” or other abused by his father and/or grandfather.

C. Clarke Holm has made no effort to maintain a relationship with Ashton, to maintain visitations, or otherwise be involved in his life (he may have seen Ashton on occasion).

After viewing some of C. Clarke Holm’s videos, Angela, who claims to be able to “read” C. Clarke Holm, claims he shows signs of continuing to use drugs illegally, or illegal substances.

She was aware that C. Clarke Holm did receive Social Security benefits and food stamps.  She is not aware of any mental illness diagnosis while they were together.  She had one or more protective orders issued against C. Clarke Holm, which he would violate but without consequence.

Angela and C. Clarke Holm split up around 2010.

Ashton Cross is only slightly aware of what his father, C. Clarke Holm, has been involved with in recent years.