(Mirrored from other venues. – RLBaty)

So many issues, so I get to pick one, and I picked this one to highlight in this post.

Jman exe (an anonymous and cowardly surrogate for Kent Hovind who showed up in the comments section of a popular YouTube video broadcast by Bertus Den Droef at: https://www.youtube.com/watch?v=EC5TLO4Itqo) really seemed interested in it, and kept asking, while refusing to open his eyes to and acknowledge and deal with my responses:

One or more former Indianapolis Baptist Temple buildings
were bulldozed
by the federal government after court ordered seizure.

Kent Hovind has effectively made that claim an important part of his life-long pledge to fight our Government.

You can hear Kent Hovind’s own words affirming such a thing at:

You can read Greg J. Dixon’s own words about it at:

OK, so Kent and Greg said it.
Some of their people believe it.
Some seem to think that settles it.

Besides their “say so”, what evidence do they present to convince us that their claim should be accepted as true?

I have not seen any.

Maybe it was just that way.
Maybe not.

I happen to believe it was not, and after many efforts to resolve that matter, I have concluded that it is a lie that is being perpetuated by Greg and Kent as part of their overall anti-government agenda.

I do not dispute that one or more of the buildings, formerly belonging to the IBT (Indianapolis Baptist Temple) operated by Greg J. Dixon, were demolished.

My belief happens to be that the evidence will indicate that the demolition was simply part the overall building program of the new owners.

I doubt Greg or Kent will dispute the claim that the new owners demolished one or more of the buildings.

The issue remains for Kent and/or Greg to provide evidence for their claim that the IRS/Justice Department demolished one or more of the buildings.

I will gladly consider such evidence (I already have the many ipse dixit claims such as made by Kent and Greg). 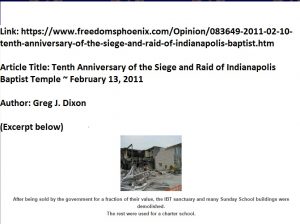