↓
Home→Amelia Schwab On Why The Children Were Taken!

That coverage has been primarily done via the FaceBook group linked below, “Understanding The Baby Holm Case”, and this website.

Raymond Schwab and his people have long proposed that the children were taken because of his recreational and/or medicinal use of marijuana.

Others, like me, have long disputed that claim because the available record indicates it was otherwise (i.e., on account of a history of child neglect and drug and alcohol abuse involving both parents).

In recent days I have been provided with screenshots of text messages exchanged between Amelia Schwab and one or more others which, if what they are alleged to be, adds further substantiation to the claim the children were taken in to State custody for good cause and not simply because of recreational and/or medicinal use of marijuana.

Rather than work effectively for the return of the children, the parents, Raymond and Amelia Schwab, have worked hard to insure the State would have no good reason to return the children to their custody.

After almost 3 years, the controversy continues as the State retains custody and has the children placed with relatives of Amelia Schwab (according to reports).

The next court proceeding is, reportedly, scheduled for November of 2017, and it is not clear whether the parents, one or both of them, will be closer to retaining custody or the State will be closer to terminating parental rights.

Following is a transcription, made by me, of Amelia’s comments as reflected in the screenshots following.  Amelia has been asked to confirm or deny the representations made here regarding the screenshots.

Please keep me in your prayers.

I am still very worried about my kids.

I seen my Christian counselor yesterday
and she said it is most important to insure
the children’s well-being and safety.

I must insist to you that I really feel that my
kids are in a vulnerable and potentially
dangerous environment with my husband.

I am going to get them but because Raymond’s
drug induced, vindictive, deceitful and conniving
behavior I am scared to get others involved.

I feel I must go about this carefully and prayer-
fully.

I need a safe place to go in Topeka after I get
my children.

I am contacting a battered women’s shelter to
see if they can help but do not believe that
environment is suitable.

Is there anywhere the church could send us.

Will you be willing to help us?

I also need prayer about those things specifically.

I can’t step out of God’s guidance and instruction.

There is too much at stake.

I think he could be dangerous.

He has hurt me a few times and believes I am
at fault for the things falling apart.

He can be violent natured when on
drugs. I am going up to Topeka to feel things
out and check on my kids and wait for
guidance and confirmation from the Lord.

I have no money, no safe place and I do not
know anyone.

I cannot get my family involved because
Raymond will go after them.

My mom is going to keep my daughter until
I tell her to bring her to me.

My sister wants to call the cops but Raymond
has already warned us on that. 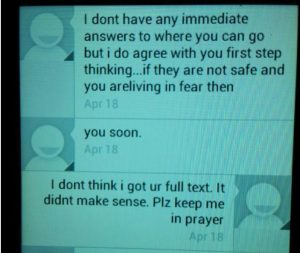 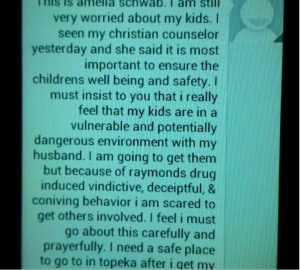 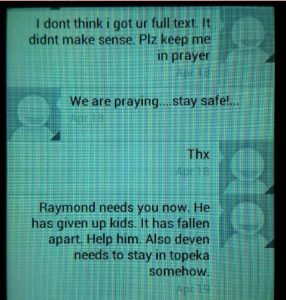 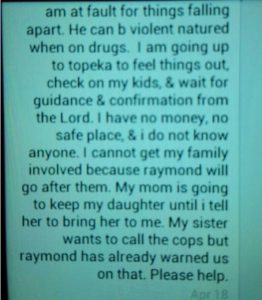 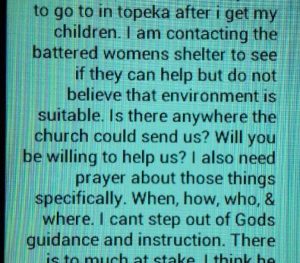 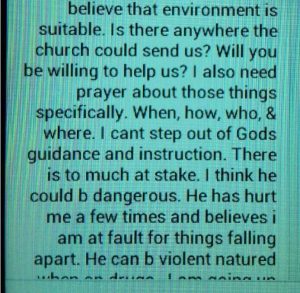 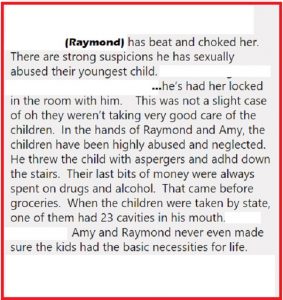 The above might explain what is wrong with the oldest child’s, Tyler’s, right eye.  He’s not in State custody, but is currently reported to be working with his step-father, Raymond Schwab, in Puerto Rico. 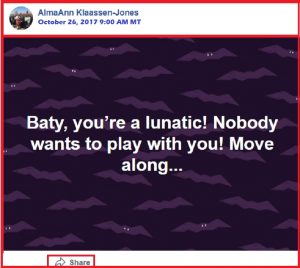 The following is in the context of discussing Raymond Schwab’s walk to Washington, D.C. 10 years ago as part of his anti-government, anti-war, 9-11 conspiracy promotions while associating himself with another religious group. 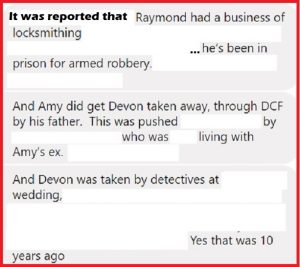 Summary based on reports from Raymond Schwab and others.

1. Tyler – of majority age and has teamed up with Raymond Schwab, Amelia’s 3rd baby-daddy, to pursue a career in the marijuana business and other ventures.

2. Madison – a girl, of majority age and apparently doing well after being adopted shortly after birth at Amelia’s direction.

3. Devon – will reach majority age within the next 2 months and “age out” of foster care; his future in doubt and his intentions unknown.

4.-7. three boys and a girl, Raymond Schwab’s biological children, presumptively, whose futures remain in doubt and whose custody is still subject to dispute while they remain in State custody and foster care.

The above provides additional details about the conditions existing at the time the children were taken as well as a number of other on-line references to coverage of the matter.