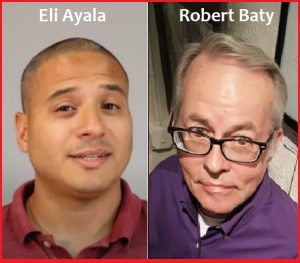 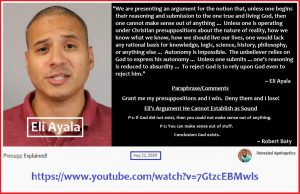 Over the years I have had a number of discussions with Presuppositionalists, with varying results.  Sye Ten Bruggencate has refused to face me.  I have had 2 somewhat formal debates with Jason Petersen.  I have, more recently, had some extended, casual discussions in the comments section of Eli’s video interview featuring Sye Ten Bruggencate.  Those discussions are archived elsewhere and may be referenced later.

Eli has yet to engage me in a serious discussions of what I see as the failings of Presuppositionalism.

I thought I would present the opportunity in this medium, and post an invitation below his most recent video illustrated above, in case he might choose to requite my love and come here to discuss relevant matters, in writing.  That discussion can proceed in the comments section below this article, if Eli chooses to meet me here.

My Invitation to Eli 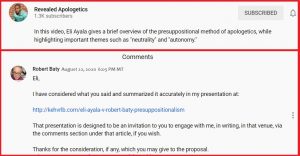 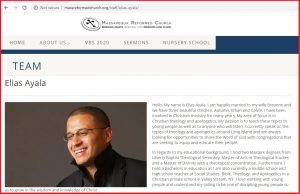 I also sent an invitation via Eli’s FaceBook page as shown below! 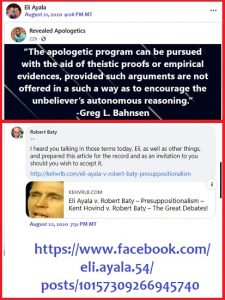 The following exchange has taken place at: 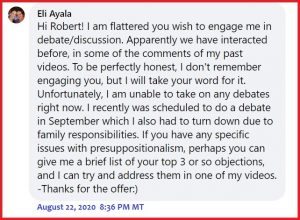 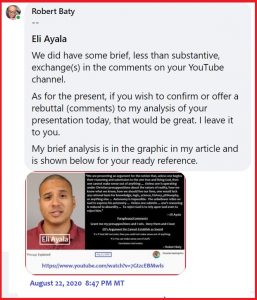 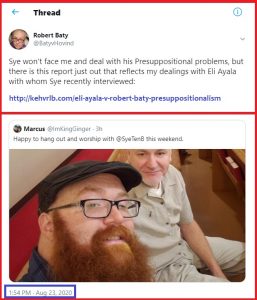 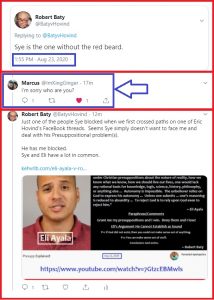 Go to video link for full context of discussion: 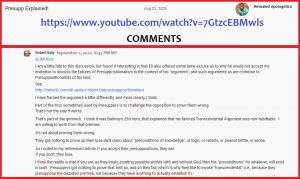 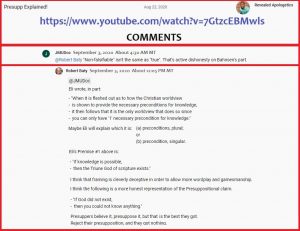 This should bring to a close that effort, with Eli refusing to even try to rebut my claims regarding the failures of Presuppositionalism. 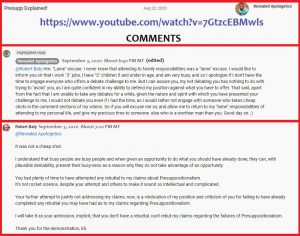 This is kinda funny!

Eli runs from me and into the arms of J.D. Martin! 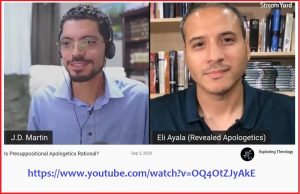 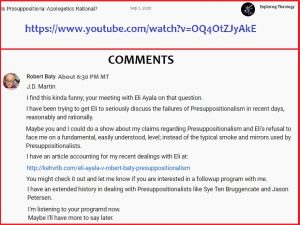 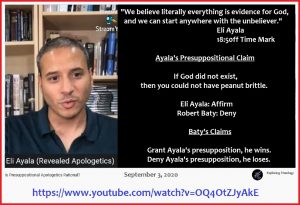 I also added comments to J.D. Martin’s FaceBook thread at:

Eli Ayala is keeping his promise not to face me or dare to try and challenge my fundamental evaluation of Presuppositionalism, but he’s now, even though so busy, launched a book project, and another surrogate has attempted to take up for him.

Link to latest video about his book deal:

Screenshots from comments section below that video: 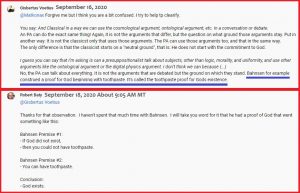 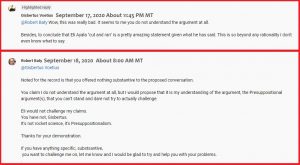 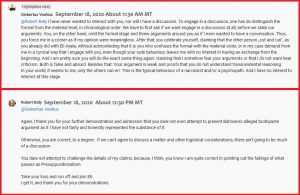 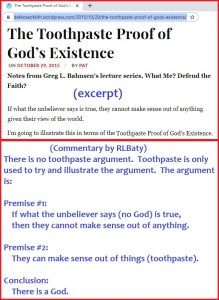 I added this to the conversation at Eli’s place noted above: 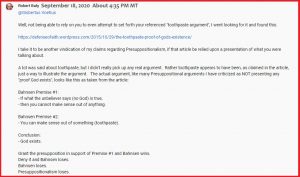 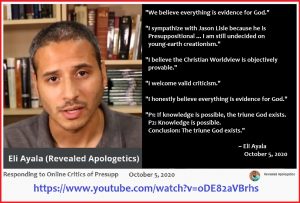 Further references for consideration which, I believe, demonstrates that Eli failed to explicitly consider my criticisms of Presuppositionalism.  Rather, he vindicated by criticisms. 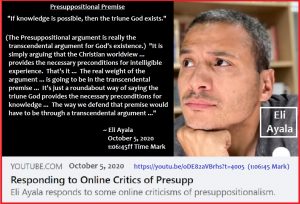 Link to comments illustrated below: 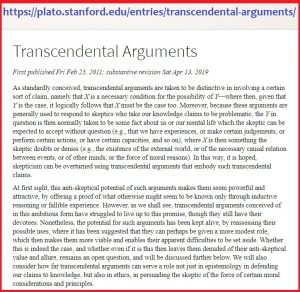 Eli Ayala is everywhere these days telling the same story and claiming to address objections while refusing to face me and/or my objection; that Presupp, despite claims for it, provides NO, NO, NO “proof that God exists”.

Link to Zac’s video illustrated below: 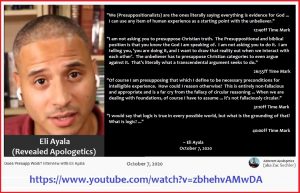 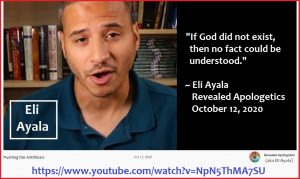 In the comments section:

Facts can be understood.

So, why is it there are still atheists? (I know, I know, Eli doesn’t believe there are any real atheists, right; but that’s a different issue).

Grant Eli his presupposition and he wins.

Deny his presupposition and he loses.

Eli believes it, presupposes it.

That’s as close as he gets.

Just some of my thoughts on all of that.

So I’ve read this article of yours on Eli, and wow.

Friend, you have an obsession.

Anyway, it seems you’re implying that we believe that

“if God did not exist no fact can be understood”

on pure abritray faith, which is not the case.

We believe it first and foremost because of the impossibility of the contrary.

Deny it, and no fact can be properly understood (in a consistent non-Christian fashion, that is).

Rather, you take it on pure arbitrary faith that you can properly understand facts by making yourself the final and ultimate reference point in all facts.

Hence, you’re stuck in the egocentric predicament and you destroy the foundation for all knowledge.

Repent and believe the Gospel of Jesus Christ who died for your sins on the cross, and rose in the third day defeating death.

The invitation is open.

You too can share in the riches of the Christian worldview.

It’s not about me.

I think you have confirmed my claims in my earlier comments with your added presuppositional beliefs.

I like to keep things simple, so let’s try this.

And the support for the affirmative of the proposition is…………..?

The Triune God of the Bible is the precondition if intelligibility.

You either regard Him as ultimate, or yourself.

The latter reduces you to absurdity.

There are multiple lines we could follow to demonstrate this, for now I’m genuinely interested in your answer the following:

You seem quite keen to engage in logical argumentation.

Care to provide a justification / grounding for your continued reliance on the universal, unchanging, immaterial and transcendent laws of logic?

Do you just arbitrarily presuppose them on blind faith?

Where are they located?

Why ought I argue in a logical and coherent fashion?

Your further appeal to presupposed assertions is so noted, as is your lack of anything more in support of Eli’s and your proposition.

You, Eli (Presuppositionalism) has nothing but presuppositions to support your claim that:

You don’t need to quiz me.

No questions are necessary.

You either have something more than presuppositions to support your proposition, or you don’t.

If you’ve got, feel free to present it.

I’ll either accept it, if you’ve got it, or try to explain why your effort fails to establish the proposition.

So, it turns out Arne Vester, my new adversary, is a wannabe Presupp apologist from South Africa, with his own organization. 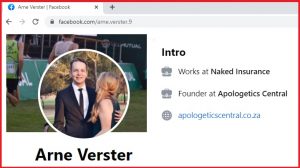 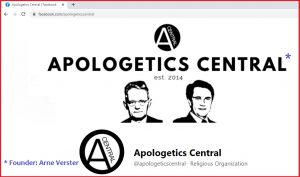 He also has a YouTube channel.  Here’s one of his video links:

Ok at this point you’ve exposed that you have no interest in actually understanding what is being said.

You have taken the unfortunate course of many before you. It is my understanding of the failure of Presuppositionalism to offer any “proof God exists” that you and others can’t stand.

Eli’s and your proposition remains as a testament to his and your failure to overcome/rebut my criticism.

Grant Eli’s and Arne’s presupposition and they win.

Jason L. Petersen and I debated Presuppositionalism in days gone by.

(Go to link above for full exchange.) 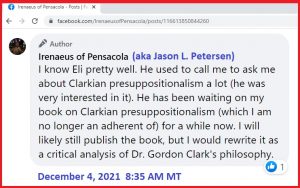 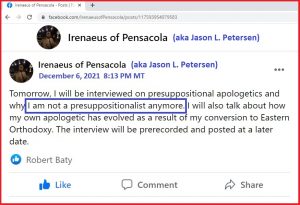