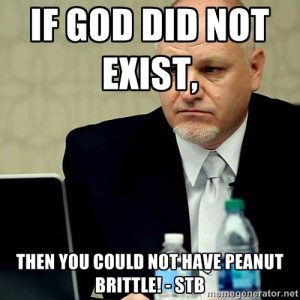 In the long ago one of my YAHOO! group members made a passing comment about how Eric Hovind had been converted to Presuppositional theology.  I let it pass, not knowing what he was talking about at the time.

Some time later I happened to look into it, scratching my head as to what it was all about as is common amongst those unfamiliar with the Presuppositional conversational gimmick.

I then ran in to Sye Ten Bruggencate on one of Eric Hovind’s FaceBook pages and tried to engage on the issue. Eric never would engage, but Sye did for awhile and then, as seems to be his style, he cut and ran and let others try to cover for him. Even Eric helped out by blocking me from that page.

Sye and I would cross paths a number of times and yet he would never openly and honestly engage me on the issues and deal with his problem (i.e., his “proof God exists” offer NO proof God exists.).

Maybe we can consider the Presuppositional issue here if there is time and interest.

My latest debates with apologists for Sye Ten Bruggencate are archived at:

This is from my first debate with Jason Petersen and, I think, illustrates why Presuppositionalism fails as to offering any “proof God exists” and the dishonesty of its promoters in trying to propose an argument for the existence of God that begins with “If God did not exist…” which implies knowing how things would be in a possible world where we were but God was not. 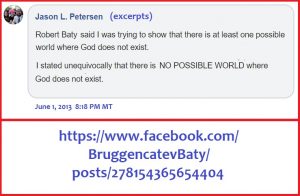 Jason Petersen reports the culmination of his conversion to Eastern Orthodoxy! 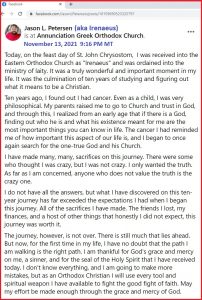