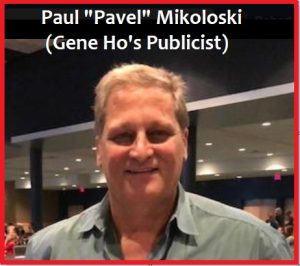 Nadean Ho, Gene’s wife, has a FaceBook page at:

Gene Ho, the 2016 presidential campaign photographer for now President Donald Trump, wrote a book about his experiences and is currently on a book tour.  Kalispell, MT is one of his stops later in September 2020 where he will headline a Republican Party event.

On September 4, 2020, Gene Ho appeared on the YouTube broadcast of James White, host of the Northwest Liberty News program (operating out of Kalispell, MT).

I tried to warn Gene before the appearance with James White, but apparently such warnings were not received in time to cancel the appearance.

After the appearance with James White on September 4, 2020, I contacted Gene Ho’s publicist, Paul “Pavel” Mikoloski.  He and I exchanged emails and had a lengthy phone conversation.  He expressed interest and concern which appeared legitimate and indicated he was not earlier aware of any issues with James White and was unfamiliar with him.

A short time after my communications with Paul came to an end, I got an email from Gene Ho thanking me for the warning and indicating that he, like Paul, was unaware of the issues involving James White.  I responded by suggesting that he contact Paul to further consider the matter and get back to me.

I advised Paul of my contact with Gene and advised him that they should consider the matter and let me know if they were interested in engaging me further about the matter.

The Story That Made Me Aware of James White 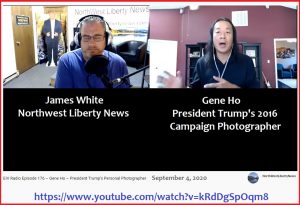 Information about Gene and the Kalispell event 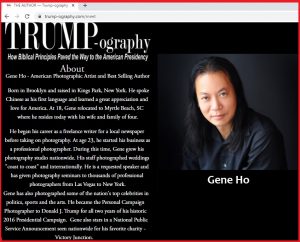 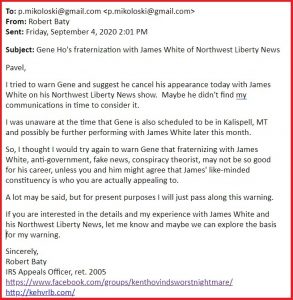 A couple of responses 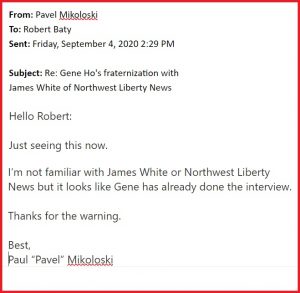 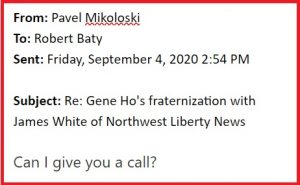 After a lengthy phone call with Paul, we had further email exchanges which, in part, included information I agreed to send him.  After that concluded, I received the following from Gene in response to my on-line use of his “contact” feature (I did not keep a copy of that message). 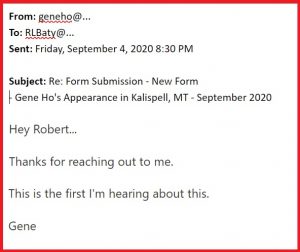 Details regarding my phone conversation with Paul and subsequent emails may be added to this article later.  For now, such did not appear necessary or appropriate.

As noted above, it is my opinion, and the purpose of this article is to archive/memorialize my opinion on the matter, that President Trump is disadvantaged in being associated with anti-government folks like James White who champion other anti-government sorts.

I don’t know Gene Ho, but I also opine that his career and personal interests will not be well-served by associating with James White and being exploited by him and other like-minded folks because he had a close relationship with President Trump.

Maybe you will agree with me!

Have I been duped by Gene and Paul/Pavel?

Could be.  Time will tell.

Alternative link to copy of text of above 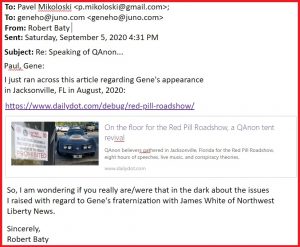 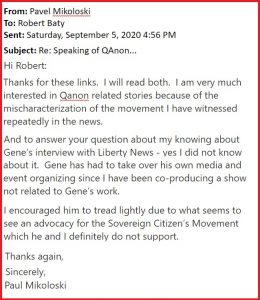 Paul/”Pavel” Mikoloski continues to play coy, seemingly, and cover for QAnon and its supporters.  Not sure what that is all about.  The links and information below indicate that Gene’s book tour sponsor is capitalizing on things “Q”.  Is it just for the money, or more than that? 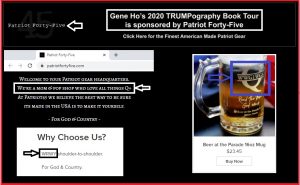 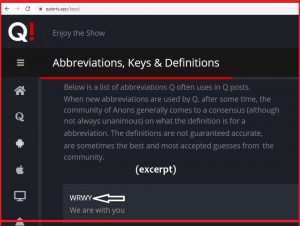 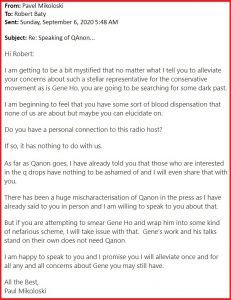 After the “red pill” event in Jacksonville, FL mentioned above, there was another more explicit “Q” event which also featured Gene Ho as one of the headliners.

Link to video featured in promotion: 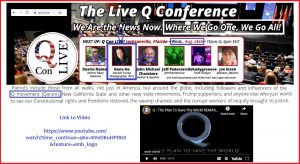 QAnon has been making headlines in recent weeks. It’s going to make more.

QAnon is, among many things, an expansive conspiracy theory built around the idea that a “deep state,” or cabal of elite leftists, is clandestinely working against President Donald Trump. A person (or small group) known as “Q” drops revelations in various forms online.

At the core of the appeal is its ability to generate fear. Suggesting that there is a powerful figure or group subverting the country and empowering all manner of evil is frightening.

Some of the headlines about QAnon in recent days have connected it with evangelical Christians. In addition, many proponents describe their mission in religious and quasi-religious terms.

A little action on one of Gene Ho’s FaceBook threads at: 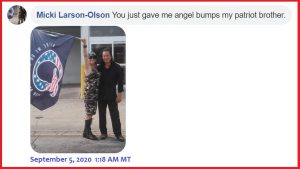 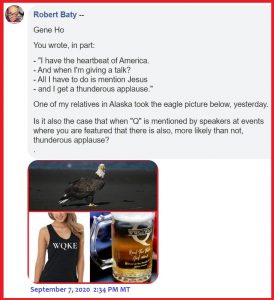 (The two smaller images below the eagle are from Gene’s Patriot 45 business.)

I came to realize that Gene Ho is the undercard for the Kalispell event later this month.  Senator Steven Gaines is the headliner.  So, I have contacted him as well as his opponent, Governor Steve Bullock, to ask them about the QAnon issue(s). 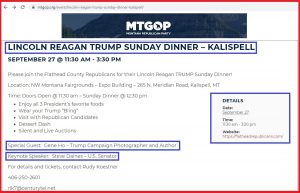 Who is John Di Lemme?

What is his connection to the QAnon movement? 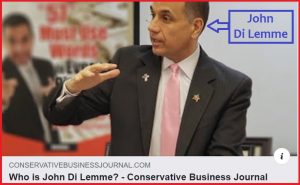 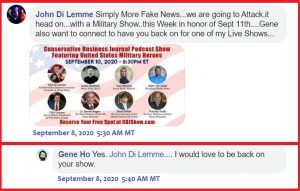 I thought to give this a try: 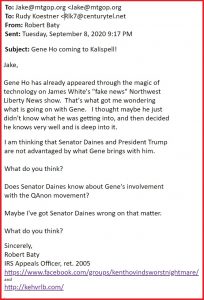 The following was included with the above email: 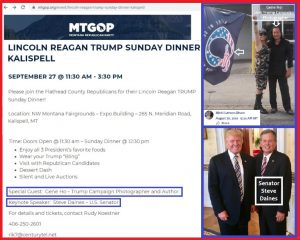 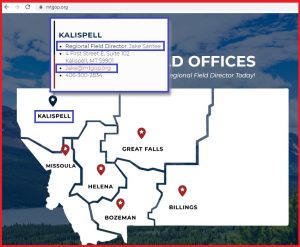 I also gave this a try!

Link to thread reflected in screenshot:

Link referenced in above screenshot:

Then this just in from Gene Ho via FaceBook: 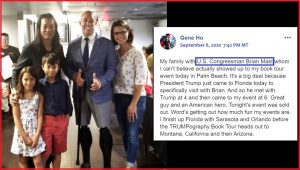 So, I asked the congressman about that on his page at: 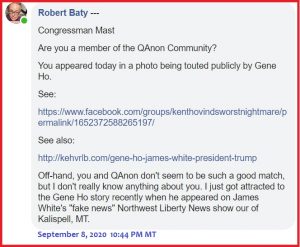 Vice-President Pence getting some heat for a Montana event sponsored by QAnon supporters! 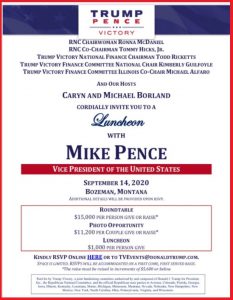 Montana’s KTVQ 2 has a FaceBook page where a thread was started about 12 hours ago regarding Vice-President Pence’s QAnon problem surrounding a Montana event he will be at in about a week.  There are currently about 400 comments in that thread, pro and con on QAnon.  So, I posted there.

May 2019 FBI statement (15 pages) regarding organizations such as QAnon: 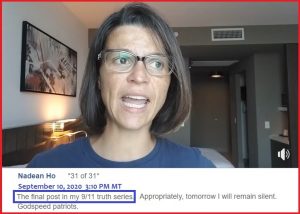 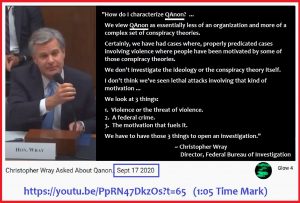 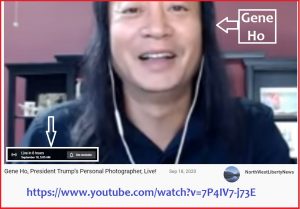 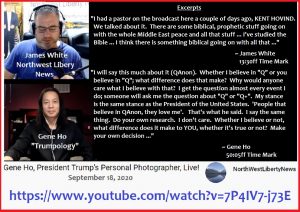 “How American Became the Land of Conspiracy Theories!”