Mr. Holm’s best sovcit performance to date; wherein he further demonstrated, along with his wife, that he was willing to give up another child in preference to his own personal problems.  In this case, they have shown yet again that having Baby Holm returned to them is not one of the things they are seriously pursuing.

It more and more seems to be all about being sovcit under the lame cover of religion.

It hasn’t worked. It isn’t working. They been told about 1,000 times to repent and bring forth works meet for such repentance if they are serious about wanting the child.

They have not repented!

Mr. Holm’s introduction to his broadcast of the proceedings!

This is our audio from today.

As you will hear the judge doesn’t allow me to speak.

We sat on the public side of the bar waiting for court to start.

Then once court started we were going to explain that we would cross the bar as long as it was understood that we were not giving jurisdiction to the court.

Once jurisdiction is challenged it must be proven.

The law states “MUST” not “IF”. No due process: no jurisdiction.

They must prove it as they are the acussers and abusers.

The judge would not allow that.

This is fraud on the court.

We have no problem with crossing the bar.

There rules of court say if you cross the bar then you give them jurisdiction.

That rule is silly and childish but that’s why they always say, “well you are hear aren’t you”?

So we as a mature adults were only trying to speak their language to accommodate them and also be fair.

The problem is that this game of man’s law is not fair and they are selfish and like children in the mind.

This is why Yeshua said nothing when he was brought before Pontius Pilate and they then murdered him.

He knew that he had done nothing wrong and that the root of the problem was their perception of love.

For they worship false idols.

This judge also has a master’s in divinity from seminary.

This is not love.

No injury, they injured us, no warrant, no pickup order, no petition, no emergency.

Maybe in 2000 more years and after more true children of the Creator are abused and slaughtered they will finally understand true love from their wicked ways.

Also we had two police officers as witnesses to testify on our behalf as to the malicious intent they have witnessed against our family and how loving we are at our visitations when they are present.

They were not allowed to speak either.

We would like to say thank you to these gentlemen for stepping up to speak truth, even though truth is not allowed in this fraudulent court room.

Now we will see our baby 4 hours per week. Rather than 12.

We are a perfectly loving family at visits.

Why punish our baby?

The only reason is they are abusing coercing, converting and trying to destroy us.

This has nothing to do with the safety with our son.

Link to Mr. Holm’s broadcast of his secret recording of the hearing:

The Holms’ chief, local supporter/promoter had this to day indicating they are determined to try and stir up trouble in Heflin, AL by bringing in their sovcit fellows; however, I have heard from another source that what Susan is hoping for from the bikers “ain’t going to happen”. 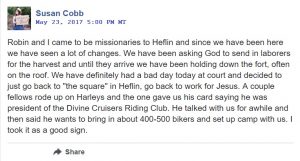 From the archives, after I learned that Kent Hovind’s Brady Byrum was secretly working with C. Clarke & Danielle Holm to develop their sovcit theology as applied to the child custody issue; which, of course, was destined to insure the baby would not be returned to the parents:

My message to Mr. Holm via the comments section of his broadcast. That entire thread has since be deleted and there are currently, May 24, 2017 at 10:30 AM MT, no comments below that video: 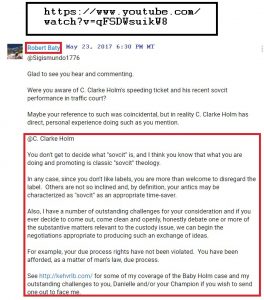 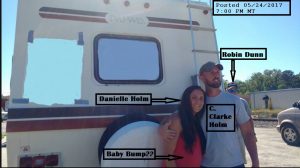