(As might be expected, the deceased child’s mother did not contribute to the development of this story because she is under medication.)

The “rest of the story” behind that promotion appears to be breaking and some details have come across my desk and they are worth reporting in order that what appears to be unseemly, possibly illegal (state and/or federal) behavior by Jennifer Winn, who is a candidate for the Kansas statehouse, and her people, seems to have been going on and is continuing.
. 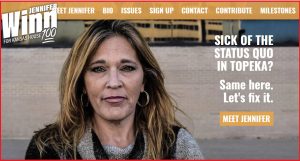 The baby died recently from what has been reported to be SIDS (Sudden Infant Death Syndrome).

After much contention amongst various parties, the funeral was today, September 4, 2018.

In brief, the mother was unmarried and had been unsuccessful for months in getting the alleged father, Jennifer Winn’s son Kyler, to submit to a paternity test.  Yes, as is so common in such unfortunate cases, a protective order was also in effect. 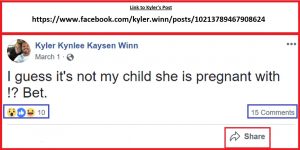 Then the baby died.

The alleged father is Kyler Kynlee Kaysen Winn, 30+ year old son of Jennifer Winn, the matriarch who appears to be calling the shots.

Kyler is reported to be married to a another woman named Linda and has other children.  His FaceBook page also advertises that he has now taken up with yet another woman as his girlfriend.

That appears to be Kyler’s new girlfriend in the following screenshot from his FaceBook page, and there is a picture of the deceased child which Kyler had not been wanting to accept as his own….until now, and maybe at his mother’s insistence. 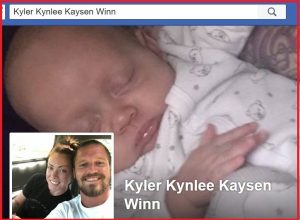 As was reported to me, upon news that the baby had died, Kyler wasted no time trying to intervene with the normal proceedings and demand that DNA samples be taken and that his paternity be determined.

Kyler and his mother, it is rumored, were seeing dollar signs in what could follow in trying to exploit the baby’s death and sue someone.  Up until now, it seems, neither Kyler nor his mother wanted to admit to paternity and pay the costs associated therewith.

Kyler and Jennifer Winn may not have been thinking about the approximate $100,000.00 in medical bills that Kyler might become liable for once paternity is determined; or the back child support.

See the above screenshot of a posting by Raymond Schwab wherein he and Jennifer went to begging for sympathy for the lost family member.  If my reports are accurate, this comes across as a rather evil attempt to continue posturing in order to exploit the baby’s death.

The related legal wrangling should be a matter of public record.

That legal wrangling, in part, included what could be considered a form of extortion.  That is, Kyler and his mom, Jennifer Winn, didn’t want the child’s body released without a “quid pro quo”.  Kyler and Jennifer Winn were successful in getting the child’s body kept without warrant or court order and a DNA sample obtained for the paternity test.

Judge Roush’s order that allowed the action might be excused to some extent because of the supposed emergency circumstances that existed, but it may ultimately be determined to have simply legally in error and without jurisdiction to have made the ruling.

Ultimately, the child’s body was released to the mother, age 24, and the funeral was able to proceed today, September 4, 2018.

Jennifer Winn, her son Kyler, and their people apparently have considerable criminal records as well as reputations as bullies in the community and on-line.  They’ve threatened me often enough.

It has also been rumored that the antics of Jennifer Winn, her son Kyler, and maybe others, in this matter, might result in criminal investigations at the state and/or federal level.

This story is developing and this presentation was made under extreme circumstances in order to advise the public as soon as possible.  I will try to update substantive developments as I can.

(NOTE – Update September 7, 2018: I had earlier removed the posted message because the grandmother had removed it from her page.  However, Michael Mihalakis (aka Meko Haze) was able to capture the message and today has broadcast it on his FaceBook page.  Therefore, I am reposting it here, below.)

Kyler & Jennifer Winn. I hope as you sat there in the back, with your 5 family members who never attempted to contact Aiden when he was living so you wouldn’t have to support him.

I hope u felt isolated, I hope you felt awkward. I hope you know there were people there that knew what you did to Aiden and were watching you like a hawk, I hope u suffer, I hope you keep walking with your heads held in shame like u did today for the rest of your life for how you treat people in this world. Kyler take ur balls out of your moms purse and stand up for yourself for once, or was this you idea ?

Winns I’m glad you were there to see HOW MANY honest, sincere, loving, friends & family that were there to celebrate Aiden & support Ashton.

Jennifer you always have so much to say on facebook & your always spewing hate and lies and libelous statements, you and AlmaAnn & all your other paid trolls are always bullying anyone & everyone EVEN CHILDREN.

Jen i thought for sure that you would have something to say me in PERSON but of course you NEVER DO when your FACE TO FACE. but in typical coward fashion u block me.

I can hear certain people right now saying Bambi, let it go, she’s not worth it, she will get what’s coming to her. Your better then that.

Your right i am better theb her and ALWAYS will be, and i wont sit back at let this WITCH to continue hurting people & no i will not let it go, NOT THIS TIME. Ive let it go on now for 3 dam years.

Yes my status is public so one of the many idiots who worship Jennifer Winn will hurry up and screenshot it & send it to her (tell her to unblock me while ur at it).

The grieving father, Jennifer’s son, decided it would be a good idea after the funeral to go fishing with his new girlfriend, and brag about it. 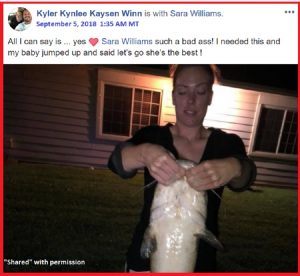 (Go to above referenced link for my continued exchange with Michael.)

Another report from the alleged grieving father and his new girlfriend: 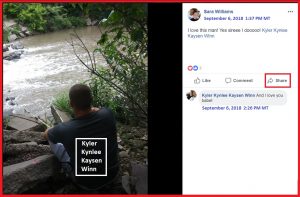 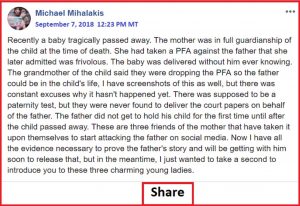 The war appears to have begun in earnest as evidenced by the two threads referenced above.  You can go to the link noted above and review the extensive amount of posting that has been made in each venue, as well as the following link to an attempt by Michael Mihalakis (Meko Haze) to explain and justify the side he has taken:

In the midst of the battle, I just happened to snare this: 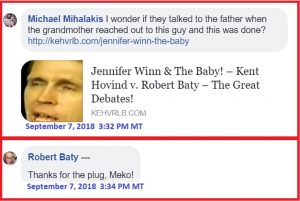 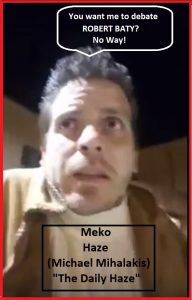 Jennifer Winn shows up to help out her son on his FaceBook page (one of several of her posts in the referenced thread)! 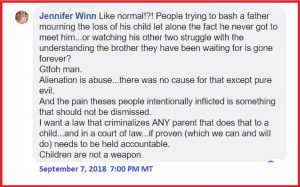 An informant has advised me that the paternity test did confirm that Kyler Winn did father the child.