John Gentry is one of many on the spectrum disorder involving those anti-government, anti-child welfare, anti-family court people that have taken to social media to try and make names for themselves and rail against the Government.

I recently accept a challenge from John Gentry and it didn’t take long for him to tuck tail and “run”; makes my job so much easier when my adversaries resort to such childish, spiteful tactics as John exhibited during our brief encounter.

Link to thread on John’s FaceBook page where most of our encounter took place:

John Gentry’s own proposition from which he tucked tail and ran after I accepted his challenge to discuss it and either accept his argument or offer a rebuttal:

A judge being on the Board of Judicial Conduct is a second office of trust prohibited by Article 6, Section 7 of the Tennessee State Constitution.
.
– John Gentry: Affirm (Gentry Defaulted by Withdrawing)
–
– Robert Baty: Deny 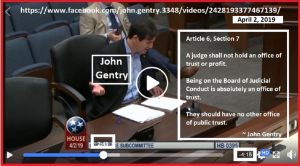 Following, as I get the time, will be the substance of our exchange, in reverse order, starting with the latest posts.

I’ll just ignore and block you on social media. I’m still open to debate and am happy to coordinate that through email but I tire of your posts on my page.

John Gentry, I guess the notion of negotiating as is normal in such cases, is a concept that is beyond your comprehension.
.
I have noticed no response to my last email wherein I asked you if the reference included was the program you thought I should download in order to use ZOOM.
.
I am busy, too, John, but I don’t play that “I am busy game” like you do.
.
You again failed to accept your own proposition for debate. I will consider you have conceded to me that proposition. Let me know if you have another you wish me to consider.

You have become annoying to me. I am a busy man, even now preparing for more testimony before congress. I will debate or converse with you on Zoom.

The venue will be Kirk’s law corner.

The proper means to address coordinating with me is via email.

I receive a lot of correspondence.

I have many demands of my time so occasionally follow up email to me is necessary.
.
Thus far I have little interest in you as your dialogue is not meaningful.

I disagree.
.
I think written debates are much more efficient and meaningful if properly developed. You have already proved worthy of my time in demonstrating your tendency towards evasion. To debate me it is only necessary that we negotiate in good faith the logistical details and follow through.
.
For instance, we need to agree on a venue, a proposition, and other relevant details. For instance, you made a claim which I challenged, and you have yet to agree to debate your own claim.
.
Here it is again for reference:
.
Gentry v. Baty Proposition
.
A judge being on the Board of Judicial Conduct
is a second office of trust prohibited by Article 6,
Section 7 of the Tennessee State Constitution.
.
– John Gentry: Affirm
–
– Robert Baty: Deny

I encourage debate that helps me sharpen arguments.

Perhaps you will prove worthy of my time.

Thus far I only note unsupported positions from you.

To debate me it is necessary to provide constitutional basis or statute in compliance with constitution that support your argument. US Supreme Ct opinion is generally respected as well.

I care not about others or what others think.

Keep your comments to comstitutional law.

I do not engage in triangle conversations about others not present. To do so show poor etiquette as you have now shown.

Debate is best in person (zoom) and not in comments.

I look forward to rational debate with you. 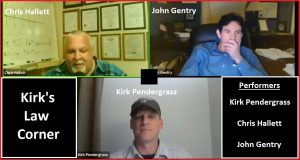 It appears John Gentry is a very sore loser.  We had a brief email exchange this morning, and he seems to have “lost it” as far as the 2 of us ever getting together for a proposed “debate” on matters of mutual interest.

More importantly, it appears John has resorted to evidence tampering; deleting from his FaceBook page the posts noted above.

Following are the screenshots I took of the above-noted posts; for the record, and in light of what appears to be evidence tampering by John Gentry. 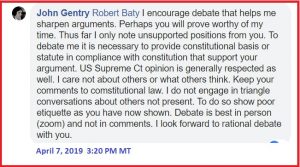 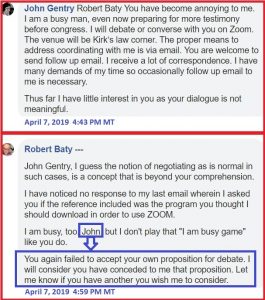 Upon further consideration, it now appears John Gentry has been even busier with his evidence tampering; deleting even more posts from his FaceBook page.

Here’s a dozen more posts, not presented in this original article above, but which also appear to have been deleted by John Gentry. 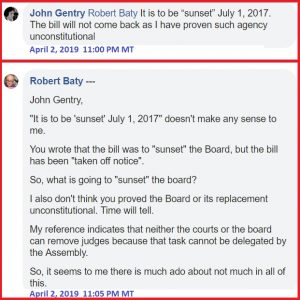 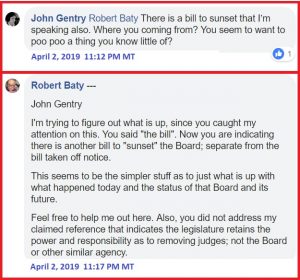 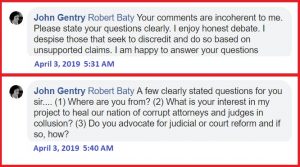 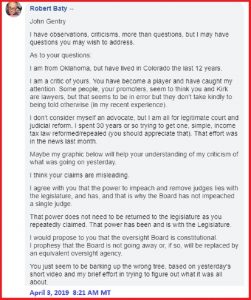 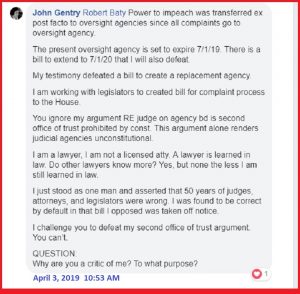 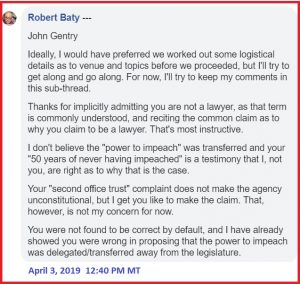 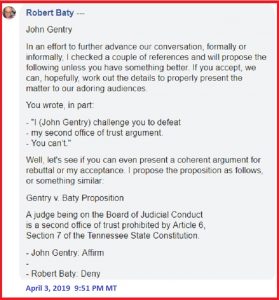 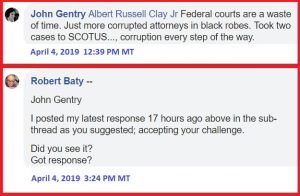 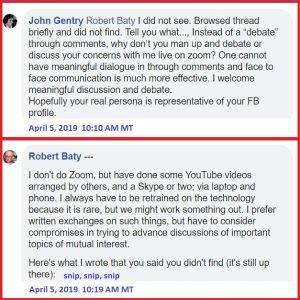 It appears John Gentry continued his evidence tampering and has now removed all of my posts to his page thread at the following link:

Interestingly, and in demonstration of his hypocrisy, JOHN GENTRY lets the following posts stay in the above-referenced thread with his explicit notice and approval:

Someone using the name of Bill Zehler has now asked JOHN GENTRY about all of that:

A Randy Smeltz has now also added to that thread!

John Gentry, of course, is not the first to turn tail and run from an opportunity to “get Baty”.  Link to related article on this site:

Like all the good wannabe advocates, John Gentry has found a political office to make a run for so he can add “former…candidate” to his resume! 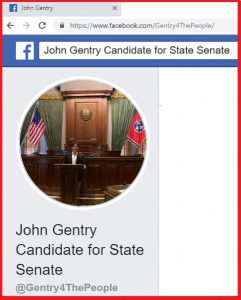 John Gentry tried to intervene in federal court on behalf of Neely Blanchard, a woman recently arrested for kidnapping her children from someone else who, apparently, had legal custody of those children.

Gentry, apparently knowing he had no “standing” to file on behalf of Blanchard, who remains in jail, filed a flurry of stuff in an effort to “create a record” he will try to exploit later for his own agenda.

My thanks to the Court for quickly disposing of the case, via DISMISSAL.  Following are files containing the DISMISSAL ORDER and the Memorandum & Opinion in support thereof. 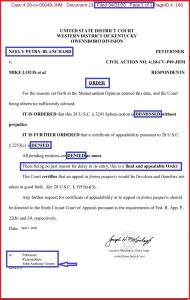 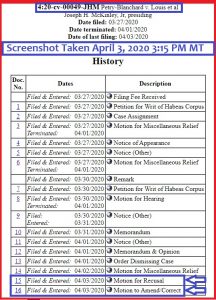 It appears Gentry has also been meddling in the Blanchard case on the local level, and even the knuckleheads in “the movement” don’t like Gentry’s meddling. 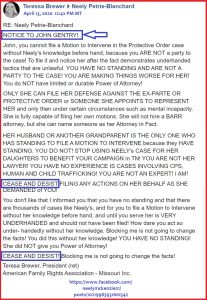 The Court has gone to the trouble to DENY all the motions received from John after the DISMISSAL. 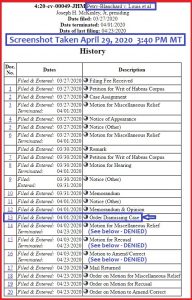 It is being reported that Neely Blanchard has been arrested as the prime suspect in the murder last night of Christ Hallett (E-Clause), an associate of John Gentry. 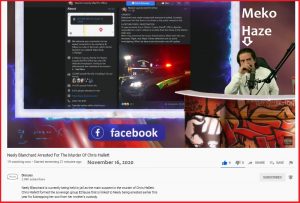 Some anonymous spook on Twitter asked me for proof that Hallett was a con man.  That’s rather subjective, and I didn’t engage in bantering with him about that matter, under the circumstances there.  However, I did look up this material and will post it to Twitter as reference as well.  It shows Hallett falsely presenting himself to a federal court as if he were a lawyer and in the promotion of a frivolous suit ultimately dismissed for failure to prosecute. 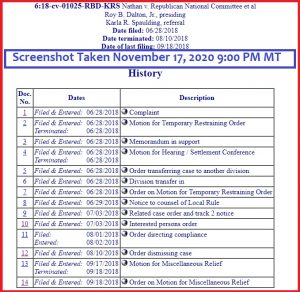 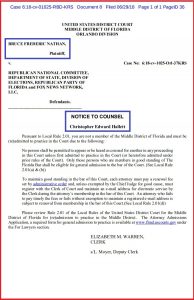 Ante Peric, an advocate legend in his own mind, has posted a YouTube regarding the Hallett case and boasting of having given Hallett the E-Clause idea and had sex with Neely Petrie-Blanchard before Hallett did, and lots of other things, including his crack legal expertise.  Following is an example, bwahahahahaha, regarding his own federal case. 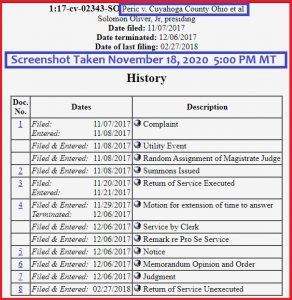 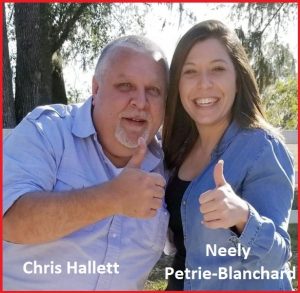