There’s no good reason to believe Susan Cobb, and good reason to not believe Susan Cobb, but I will play along and see if Susan Cobb, who has shown herself unable to handle the truth regarding the Baby Holm custody case, will come out of hiding and talk with me about the matter, and whether or not C. Clarke & Danielle Holm will do as I suggest, in full or in part, and as otherwise might be deemed appropriate by the State of Alabama.

Susan Cobb’s post tonight, February 26, 2018, as taken from the following FaceBook thread on the page of C. Clarke Holm at: 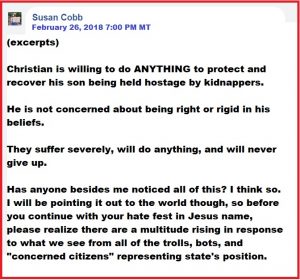 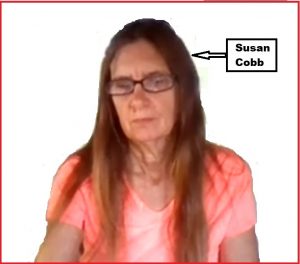 My Suggestions to Susan Cobb & The Holms

If Susan Cobb’s claims are correct, then let C. Clarke & Danielle Holm demonstrate it in the following ways (not intended to be an exhaustive list), if it is not already too late, beyond the point of no return (practically speaking):

They should file a proper appeal of their reported restraining order.

They should properly contest the termination of their parental rights.

They should admit that Baby Holm is not being held hostage by kidnappers.

They should work with the State of Alabama Department of Human Resources (DHR), in good faith, in order to convince the State that they are willing and able to provide the necessary and appropriate care for Baby Holm, which may include but not be limited to, according to reports, proper mental evaluations for both C. Clarke & Danielle Holm.

They should admit that Robert Baty’s positions on the following propositions are correct.

The State of Alabama was legally and factually justified in retaining custody of Baby Holm, based on the provisions of Alabama Code Section 12-15-306.

Alternatively, Susan Cobb should consider admitting that she was flat-out lying about C. Clarke Holm’s willingness to do “ANYTHING to protect and recover” Baby Holm; and C. Clarke & Danielle Holm, in any case, need to affirm or deny Susan Cobb’s claim.

I sent Susan Cobb the link to this article via her latest tweet on Twitter, as shown below: 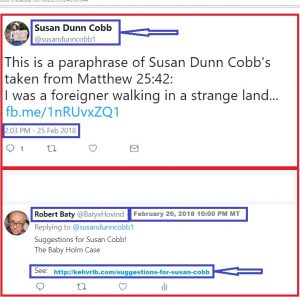 Danielle Holm appears to imply that Susan Cobb was, in fact, lying about her and C. Clarke Holm’s willingness to do “ANYTHING” to affect the return of Baby Holm to their custody.  This is from Danielle’s latest FaceBook page thread at:

More evidence that Susan Cobb was flat out lying; from C. Clarke Holm’s FaceBook thread at:

Susan Cobb convicts herself of flat-out lying in posting the following to C. Clarke Holm’s latest thread on his FaceBook page at: 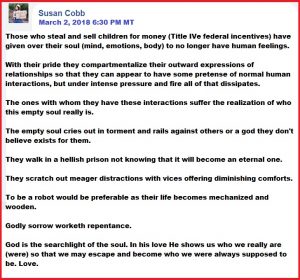