↓
Home→Pete Santilli to Judge Rodgers on Behalf of Kent Hovind!

Beginning about the 23:05 mark (clerk’s comments in parenthesis)

Hello, can I speak to Judge Rodgers please?

(She’s not available at the moment. This is Kathy. May I help you.)

Kathy, are you her assistant?

You are.  Can I get a message to her.

Tell her, my name is Pete Santilli.  OK!

I understand she’s got a little bit, a little bit of a problem with Christians.  Namely Pastor Hovind.

And she’s abusing her black robe; her power and authority on the bench.

And I am going to tell you something right now.  We’re whipping up the biggest firestorm that she’ll ever see.

First of all, she needs to recuse herself from that case.

I am going to demand that on behalf of all Christians in the United States of America, OK.

Your system, we have it all figured out, OK.

The communist regime that has a strangle hold on our government using the judiciary to go after people like Pastor Hovind, using the IRS in a very hypocritical fashion whereas you don’t go after Al Sharpton and Timothy Geithner, OK

Going after Pastor Hovind will not stand, OK.

She should recuse herself.  She has tremendous bias.  We have her on the record for what she has stated is not acceptable and conduct unbecoming of a judge, OK.

So, I’d like to call upon her to just remove herself or face the wrath of the people here in the United States of America.

They are going to come against her; make sure, basically, she will be unemployed.

Could you please relay that message to her.  Would you like for me to give you my telephone number.

Judge Rodgers will not get away with what she’s attempting to do to Pastor Hovind.

I just want to state that for the record.

Why was he put in isolation?

Why don’t you have her find out and get back to me? OK!

How about if you have her find out?

There should be no reason why he’s put in isolation; now, all the sudden.

And there are a lot of radio talk show hosts, there’s a lot of Christians that are now awakened to what Judge Rodgers ia attempting to do to our fellow American.

A. He has committed a victimless crime.

Even if he were convicted by her, OK.

It was a victimless crime.

You don’t put a man away, a Christian man, away for life, OK, for what she considers to be worse than rape as she stated in the courtroom which she deleted from the court transcripts I understand.

This is a disgusting thing she is doing.

And it’s not going to stand.

I’m going to tell you that right now.

I’m calling upon every single Christian to surround that courthouse during that trial and I demand, right now, and the judge can do this, just have Pastor Hovind released, OK.

Can she get that done?

Does she have the power?

Have her release him right there.

We’ll meet you at the courthouse steps.

We will meet him at the steps.

She has the power to do it.

She needs to do what’s right, or face the will of the people.

(Well, alright, I’ll pass that message along to her.)

Have her give me a call when she is going to have him released from prison, OK.

(I’ll pass that message along.)

It would be best if she just recused herself and found somebody to do the right thing, judiciously, OK.

(Alright, I’ll pass that message along.)

See you at the trial; semper fi.

I’m sick of this system.

I’m also upset at the following…

How many people do we need to send down there to get him released?

The following screenshot explains why you can no longer access Pete’s video linked below (but the transcription of his call to Judge Rodgers is posted below). 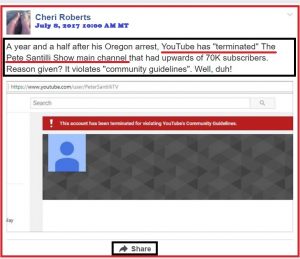 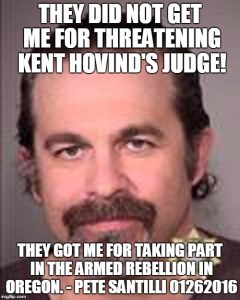 (UPDATE: The charges in Oregon against Pete were dropped and he was transferred to Nevada to face charges there for his part in the Bunkerville event starring Cliven Bundy.  He remains incarcerated pending further proceedings/trial/settlement.)

Before Pete Santilli was incarcerated, without bail for his part in the Bundy Ranch and Malheur occupations, he interviewed Kent’s man Rudy Davis and then made a call to Kent’s 2015 presiding judge.

It was reported as part of the Bundy/Malheur media coverage that Pete’s call may be under investigation (it does seem to me to be somewhat designed to threaten and intimidate as is common with folks like Pete and Rudy).